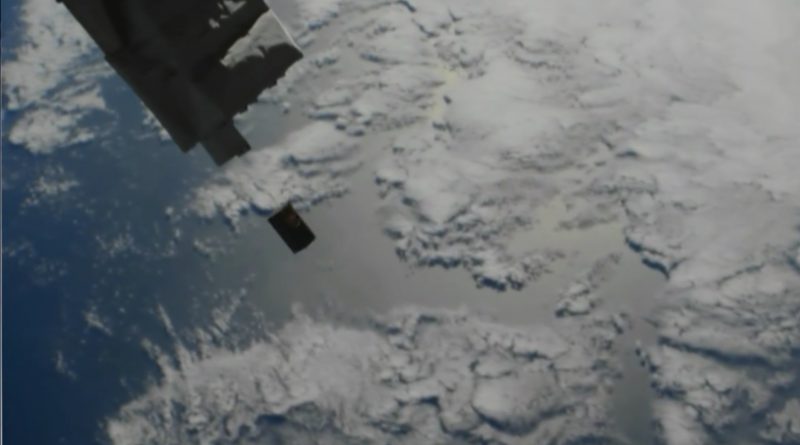 A small satellite was deployed from the International Space Station Monday morning for a technical demonstration of a tether extending system using a mother and daughter sub-satellite constellation.

The Japanese STARS-C satellite launched aboard the HTV-6 cargo spacecraft which arrived at the Station last week for a six-week stay facilitating a busy cargo-delivery mission. Among nearly six metric tons of cargo onboard the HTV are multiple CubeSat deployment systems, JAXA’s JSSOD-5 & 6 deployers holding a total of seven CubeSats and a commercial deployer from NanoRacks loaded with a university technology demonstration satellite and several CubeSats under commercial operation.


JSSOD, the Japanese Small Satellite Orbital Deployer, enables CubeSats to be deployed from the International Space Station with help from the Japanese Robotic Arm of the Kibo Module. The first JSSOD was launched aboard the HTV-3 spacecraft in 2012 and completed the first robotic release of CubeSats from ISS.

The first JSSOD offered a total capacity of six CubeSat Units and was followed by other deployers that headed to ISS in the past four years – notably the NanoRacks CubeSat Deployer that has been in use for over 100 satellite deployments, and the SSIKLOPS deployer which provides an orbital launch pad for non-CubeSat missions.

JSSOD-5, delivered by HTV-6, only hosted the STARS-C satellite while JSSOD-6 represents an upgraded deployer version comprised of four 3U deployers for a total capacity of 12 CubeSat Units.

First up for transfer to the exterior of ISS was JSSOD-5, requiring the crew on ISS to set up the Multi-Purpose Experiment Platform which provides the structural backbone for the deployer when being transferred to the outside via the Kibo airlock and grasped by the JRMS robotic arm.

Installation of JSSOD-5 was finished on Friday ahead of depressurization of the airlock, allowing the robotic arm to grapple the platform and transition to its deployment position to send the satellite into a specific direction to rule out re-contact with ISS.

Deployment of the STARS-C CubeSat was confirmed at 8:50 UTC on Monday while the Space Station was flying 400 Kilometers above the Atlantic Ocean, just six days after HTV-6 arrived at the Space Station.

STARS-C is the third mission in the STARS (Space Tethered Autonomous Robotic Satellite) Project of Kagawa University with previous missions in 2009 and 2014. The first two missions consisted of a Mothership and Daughter Satellite connected through a tether with communications through a Bluetooth System.

The tether deployment sequence is driven by gravitational forces which requires the satellite to hold a defined attitude for the deployment.

STARS C will point its daughter satellite to Earth (nadir) and initiate the deployment of the electrodynamic tether. Using springs, the two satellites are pushed apart and the full extension of the tether is accomplished through gravitational forces.