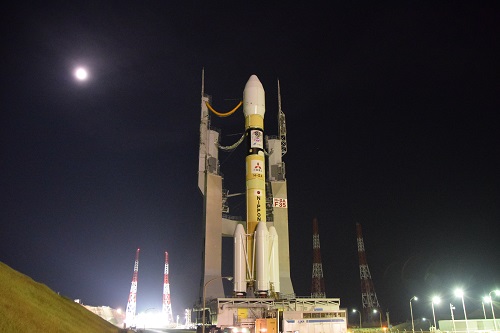 Japan’s H-IIA rocket has returned to its sea-side launch pad at the Tanegashima Space Center for the second launch attempt with Quasi Zenith Satellite 3, following a scrub last week and repairs completed inside the rocket’s assembly facility. Saturday’s multi-hour launch window opens at 5:29 UTC and stretches until 13:16, providing plenty of time to get the 53-meter tall vehicle off the ground.

To lift the 4.7-metric ton QZS-3 satellite to Geostationary Transfer Orbit, H-IIA is pulling out all the stops – flying in its heavy-duty 204 configuration with four Solid Rocket Boosters to deliver the additional kick needed to send the craft on its way via a 29-minute ascent mission by the two-stage launcher. Also called Michibiki-3, the satellite takes a special role within the QZSS navigation augmentation system as the sole geostationary member of the planned four-satellite constellation, beaming down correction messages across the Asia-Pacific Region to enhance GPS and Galileo navigation.

The H-IIA F35 rocket stood fully fueled atop Launch Pad 1 last Saturday when the day’s launch attempt had to be called off over two hours into the launch window due a leak on the first stage’s Helium system that could not be solved through troubleshooting steps with the rocket fueled on the pad.


Consequently, H-IIA was de-tanked and returned to the Vehicle Assembly Building for inspections on the system in question that holds high-pressure Helium in a central tank and delivers pressurized gas to the fuel and oxidizer tanks during flight to keep them at the proper pressurization levels.

In a press conference, launch vehicle operator Mitsubishi Heavy detailed that a foreign object within the seal of the fill & drain plug on the high-pressure Helium tank caused that seal to leak which was picked up on sensors as a loss of pressure from the system. Replacement components were put in place and pressure integrity checks confirmed that the Helium system of the 37-meter long first stage was holding pressure. The foreign object, characterized as non-metallic and 0.5mm in size, was introduced during processing when the fill/drain port on the tank was sealed up since only one of two such ports on the tank is in active use.


Announcing the new launch date, JAXA said H-IIA had been cleared for launch “after careful investigations and completion of repair actions of the rocket propulsion system.”

After repairs and re-testing, H-IIA was ready to return to its launch pad for liftoff on Saturday before weather conditions slightly worsen over Tanegashima at the start of the week. Launch services provider MHI confirmed at 12:08 UTC on Friday that launch managers had given the GO for the planned midnight-hour rollout of the H-IIA rocket to set up for the second launch attempt. H-IIA started its rollout at around 12:30 a.m. local time, completing the 500-meter trip to Launch Pad 1 without issue to set the stage for a lengthy countdown operation.

Arriving at the launch pad, the rocket’s Mobile Launch Platform will be hooked up to propellant, power and data interfaces and undergo power-up operations for an initial series of checkouts. H-IIA will press into propellant loading around seven hours and 45 minutes before the opening of the day’s launch window, pumping 120 metric tons of -183°C Liquid Oxygen and -253°C Liquid Hydrogen into the two cryogenic rocket stages.

The four boosters will fire for 108 seconds, in the process burning 66 metric tons of solid propellants and helping H-IIA accelerate to 2.2 Kilometers per second. Burnout will be sensed by the declining pressure in the combustion chambers and separation will be initiated two minutes and six seconds into the flight for the first two boosters and three seconds later for the other two, using the booster thrust struts to ensure a clean separation of the 15.1-meter long SRBs.


The first stage will finish its job six minutes and 38 seconds into the flight, having boosted the vehicle’s speed to 5.9 Kilometers per second. Eight seconds after cutoff, the 37-meter long first stage will drop away to clear the way for ignition of the second stage’s LE-5B engine at X+6:52, soaring to a vacuum thrust of 13,970 Kilogram-force to lift the stack into a lightly elliptical Parking Orbit via a burn of four minutes and 31 seconds.