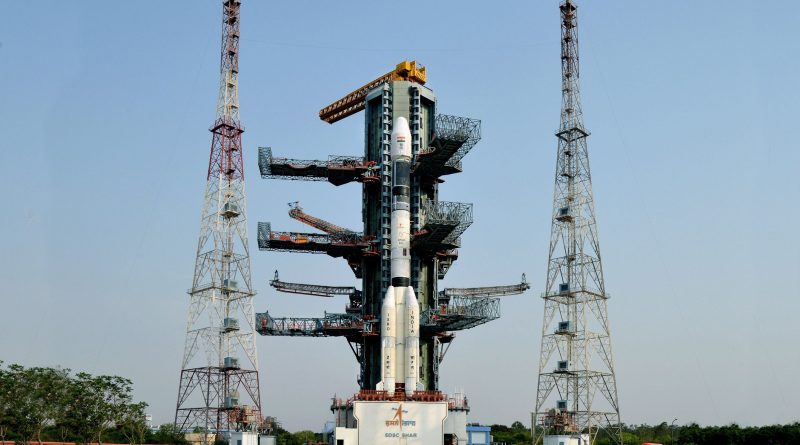 India is gearing up for the country’s second orbital space launch of the year on Friday, involving a Geosynchronous Satellite Launch Vehicle Mk.II delivering the GSAT-9 communications satellite to orbit to support communication services and television distribution over India and other Asian countries.

GSLV Mk.II is targeting liftoff at 11:27 UTC on Friday from the Second Launch Pad at the Satish Dhawan Space Center on India’s east coast. Firing up its powerful solid-fueled core stage and four liquid boosters, GSLV will be headed to the south east to reach an elliptical Geostationary Transfer Orbit after firing its hypergolic second stage and cryogenic third stage to send the 2,230-Kilogram satellite on its way around 17 minutes after liftoff.


Friday’s launch will open a busy period for India’s space program with three launches scheduled through June utilizing all three operational orbital rockets in ISRO’s fleet. GSLV will fire the opening salvo on Friday with GSAT-9, to be followed in late May by the PSLV workhorse that will transport the CartoSat-2E imaging satellite and 36 secondary payloads to orbit and in June, India plans to launch its biggest rocket, the GSLV Mk.III or LVM3, on its first orbital mission with the GSAT-19E communications satellite.

Per current plans, 2017 will see a total of five PSLV missions, a pair of flights with the GSLV Mk.II and the high-profile GSLV Mk.III mission that will test India’s most-powerful cryogenic engine for the first time in flight.

Friday’s launch will be the eleventh for the Mk.I/II rocket and the fourth after the rocket’s comeback in 2014 after a major design overhaul prompted by a sub-par reliability record in the vehicle’s early career.

GSLV debuted in its Mk.I variant in 2001, using a Russian-built cryogenic stage as an interim upper stage until India’s indigenous Cryogenic Upper Stage (CUS) would finish development. The initial flight of the vehicle was a partial success followed by two fully successful flights that raised hopes that GSLV could take over launches of India’s large Geostationary Satellites that had to be outsourced to foreign launchers such as the Ariane 5.

These plans were thwarted when the modified GSLV Mk.I and the new Mk.II with the Indian CUS encountered a string of failures between 2006 and 2010, sending the vehicle back to the drawing board for a top-to-bottom review that recommended a number of reinforcements and modifications in areas with obvious deficiencies which had left GSLV with a record of only two successes in seven missions.


Changes in GSLV’s design came to fruition in 2014 when the upgraded launcher returned to the launch pad and flew to success with the GSAT-14 satellite. Another two successful missions occurred in 2015 and 16 with the GSAT-6 communications and INSAT-3DR weather satellites and GSLV Mk.II is now hoping to achieve its fourth consecutive success on Friday, further demonstrating the vehicle can reliably perform to its design specification.

If the two GSLV Mk.II missions in 2017 go off without a hitch, the vehicle will be cleared to lift India’s most valuable payloads into orbit including the Chandrayaan-2 mission to explore the Moon, currently targeting a liftoff in the first half of 2018.

Friday’s mission will be focused on the GSAT-9 satellite, also known as South Asia Sat. Built by ISRO based on the I-2K satellite platform, the spacecraft hosts twelve Ku-Band transponders that will deliver TV services over India and members of the South Asian Association for Regional Cooperation (SAARC).

GSAT-9 weighs in at 2,230 Kilograms and can therefore not be lifted by the PSLV rocket that maxes out at 1,500kg to a sub-GTO orbit.

The satellite hosts a hybrid propulsion system relying on chemical propulsion for its climb into geostationary orbit and utilizing Xenon ion thrusters for stationkeeping in its GEO position at 48° East, validating the use of electric propulsion for future missions including all-electric satellites planned for launch in the coming years.

The GSLV Mk.II is comprised of a large Solid Rocket Motor inherited from the PSLV rocket, acting as a core stage. Designated S139, the motor stands 20 meter tall, is 2.8 meters in diameter and burns for 106 seconds, generating a whopping thrust of 4,860 Kilonewtons.

One of the peculiarities of GSLV’s design is that its four liquid-fueled boosters centered around the solid-fueled core burn longer than the S139 – meaning GSLV has to carry the dead weight of the core stage until the boosters shut down and the entire core & booster assembly separates as a whole. On the upside, this design eliminates the need to individually separate the four boosters, reducing overall complexity.


Each of the L40 boosters is 19.6 meters long and 2.1 meters in diameter, loaded with 42 metric tons of hypergolic propellant fed to a 763kN Vikas engine over the course of a two-and-a-half-minute burn.

The second stage, also largely based on the PSLV, is 11.6 meters long and loaded with 39,400 Kilograms of hypergolics for consumption by a 799kN vacuum-optimized Vikas 4 engine. Sitting atop is the C15, India’s first indigenous cryogenic rocket stage burning Liquid Oxygen and Liquid Hydrogen – a propellant combination that is much more energetic than the hypergolic mix employed by the lower stages and particularly efficient when used on an upper stage given its high specific impulse. C15 holds 12,800kg of cryogenics and stands 8.7 meters tall, sporting a single CE-7.5 engine that operates between 73.5 and 93.1 Kilonewtons of thrust.

The 49-meter tall GSLV rocket was rolled from its assembly building to the Second Launch Pad at Satish Dhawan this week and a clean Mission Readiness Review cleared the vehicle to enter a 28-hour launch countdown that begins with filling the vehicle’s boosters and second stage with storable propellants, UH25 Hydrazine and Nitrogen Tetroxide. Tanking on the upper stage occurs in the final hours of the countdown since the cryogenics have to be constantly replenished due to natural boil-off.

Heading east across the Indian Ocean, GSLV’s core stage will burn out after a minute and 46 seconds followed by the burnout of the boosters at T+2:29 when the rocket will already be 70 Kilometers in altitude, traveling 2.4 Kilometers per second. Stage separation between the solid-fueled core and the second stage occurs split seconds after booster shutdown using flexible linear shaped charges allowing the spent first stage and boosters to be pushed away by the exhaust of the second stage that ignites its engine at the moment of staging.

The protective payload fairing will separate shy of four minutes into the flight when the vehicle will have reached 115 Kilometers in altitude where aerodynamic forces are no longer a threat to the delicate satellites structure.

Second stage shutdown comes at T+4:49 followed by stage separation 3.5 seconds later and Cryogenic Upper Stage ignition one second after that. India’s cryogenic stage begins its burn in high-thrust mode providing 9,500kgf of thrust before reducing thrust to 7,500kgf for the remainder of the burn. The third stage will be up and running for nearly 12 minutes, accelerating the vehicle by close to 5 Kilometers per second to accomplish the GTO injection, targeting an orbit peaking at nearly 36,000 Kilometers in altitude.

GSAT-9 will be sent on its way just after passing T+17 minutes, tasked with deploying its solar arrays and contacting ground stations to be transferred to nominal mission mode ahead of a series of engine firings to maneuver into Geostationary Orbit for a service life of at least 12 years.