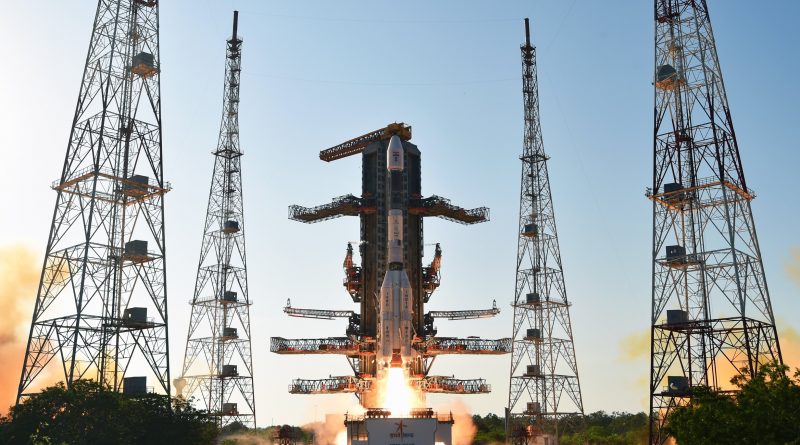 India’s Geosynchronous Satellite Launch Vehicle blasted off from the Satish Dhawan Space Center on Friday on a mission to deliver the GSAT-9 satellite to orbit to deliver telecommunications services to India and other South Asian countries.

A strange veil of secrecy went up around the mission in the days ahead of Friday’s liftoff and no live television broadcast from inside launch control was provided by the Indian Space Research Organization. Only a handful missions over the last decade were treated with such secrecy, though no civilian launch from India had been shrouded like this before.

The 49-meter GLSV came to life at 11:27 UTC, 4:57 p.m. local time, lifting off from the Second Launch Pad at Sriharikota under the power of its large solid-fueled core stage and four-liquid fueled boosters. Departing to the south-east, GSLV quickly picked up the pace to deliver its 2,230-Kilogram payload into a highly elliptical orbit, dropping the first stage & booster two and a half minutes into the flight followed by another two and a half minutes of second stage flight before India’s Cryogenic Upper Stage took over for a long burn of 12 minutes to send the GSAT-9 spacecraft on its way at the T+17-minute mark.

The successful launch of Friday’s GSLV F09 mission was confirmed shortly after separation of the GSAT-9 satellite into the intended orbit.


Friday’s mission was the eleventh launch of the GSLV in either its Mk.I and Mk.II variants that premiered in 2001 and was off to a rocky start before a major design overhaul was called by Indian space officials.

The GSLV project started out in the early 1990s to realize a vehicle that could lift India’s medium-class Geostationary Satellites into orbit as the country only had the PSLV rocket which lacks the performance for Geotransfer missions and had to drop satellites off short of a nominal Geostationary Transfer Orbit. For years, India relied on foreign launch providers such as Arianespace to lift its heavy satellites into orbit and GSLV had the goal of ending India’s dependency on outside launchers.

These plans appeared within reach after GSLV achieved a partial success on its debut mission in 2001 – using a Russian-built upper stage – followed by two fully successful missions. Then however, GSLV hit a rough patch with a failure on its third flight caused by a loss of thrust on one of the boosters, the fourth flight reached a lower-than-planned orbit due to a guidance issue and 2010 saw a pair of failures, one due to an engine problem on the cryogenic third stage and the other caused by a loss of control after a structural breach.

With a record of two successful missions out of seven tries, GSLV went back to the drawing board in late 2010 for a top-to-bottom review that led to a number of design changes in areas that showed obvious deficiencies. The re-design improved India’s cryogenic upper stage and reinforced different structural systems of the rocket, particularly the interfaces between stages and the payload fairing.

GSLV returned to flight in early 2014, successfully boosting the GSAT-14 satellite to orbit followed by successful missions in 2015 with GSAT-6 and 2016 with the INSAT-3DR weather satellite – giving GSLV a streak of three consecutive successes for the first time. Friday’s mission was hoped to add a fourth to the list and a second GSLV mission in 2017, if successful, will clear GSLV to lift India’s most valuable payloads including the Chandrayaan-2 lunar probe aiming for liftoff in the first half of next year.

The focus on Friday was on India’s GSAT-9 satellite, also known as South Asia Sat – a Ku-Band broadcasting and telecommunications satellite developed by India to deliver services to members of the South Asian Association for Regional Cooperation (SAARC). Proposed by India’s Prime Minister Narendra Modi in 2015, the South Asia Sat project is in line with his foreign policy objectives of strengthening India’s relationship with neighboring countries. As such, the GSAT-9 project was advertised as a ‘gift to the region’ with India footing the $70 million bill for the satellite and all SAARC members have been invited to participate in the project.

Most SAARC members signed on to be part of the program: Bangladesh, Bhutan, the Maldives, Nepal and Sri Lanka. Afghanistan has also shown interest and is expected to join the program at a later date, Pakistan had opted out of the South Asia Sat Project.

GSAT-9 hosts an all Ku-Band payload with 12 transponders that will deliver a variety of communication services, supporting tele-medicine and long-distance learning, emergency communications, media distribution and TV broadcasting.

In addition to its telecommunications duties, GSAT-9 will be involved in a demonstration of Xenon Ion Thrusters for stationkeeping in Geostationary Orbit to clear the technology for operational use on India’s future satellites including plans for all-electric spacecraft. The use of all-electric GEO satellites could enable more payload mass to be allocated to communications packages, thus allowing India to better utilize its limited launch vehicle performance.

Friday’s launch was the fifth for the GSLV Mk.II configuration – a design combining solid-fueled motors, hypergolic rocket stages and a cryogenic upper stage, allowing the vehicle to deliver 2,500 Kilograms to a nominal Geostationary Transfer Orbit, compared to 1,500kg that PSLV can boost into a sub-GTO type orbit.

The three-stage rocket was rolled to the Second Launch Pad at the Satish Dhawan Space Center earlier in the week and entered a 28-hour countdown on Thursday to complete fueling on the boosters and second stage before the cryogenic upper stage received its dose of Liquid Oxygen and Hydrogen in the final hours of the count.

In the days ahead of launch, it became clear that the mission would be unlike any of ISRO’s recent launches. No information on the rocket’s flight profile was released, updates of countdown progress were withheld from the public and media reports indicated there would be no live coverage from inside ISRO’s control center. No reason was given for the secretive nature of the mission which was seen as particularly unusual as GSLV was lifting a civilian satellite.

Standing fully-fueled for liftoff, GSLV entered its Automated Countdown Sequence at T-12 minutes after final approvals were given by officials. The 414,000-Kilogram vehicle transitioned to battery power, topped off its cryo tank, entered into pressurization and, at T-30 seconds, assumed full control of the countdown to set the stage for an afternoon liftoff.

GSLV came to life at T-4.8 seconds when the four L40 boosters fired up their Vikas to engines to build up thrust before the massive solid-fueled core stage ignited at the moment of T-0 to catapult the vehicle off the ground.

GSLV leapt off its launch pad at 11:27 UTC with a thrust of 800 metric ton-force, balancing in a vertical position for only a few seconds before aligning itself with its planned trajectory to the south east, targeting a low-inclination orbit.

Burning 2,425 Kilograms of propellant every second of powered flight, GSLV quickly passed through Mach 1 before encountering Maximum Dynamic Pressure as it cut through the dense atmosphere. Thrust on the 20-meter tall core stage began tailing off one minute and 47 seconds into the mission when the solid-motor had exhausted its supply of 138 metric tons of propellant. The four L40s clustered around the core continued firing for another 40 seconds, carrying the dead weight of the spent core to allow the entire assembly to be separated as a whole.

Each of the L40 boosters was carrying 42 metric tons of hypergolic propellants, standing 19.7 meters tall and measuring 2.1 meters in diameter, powered by a single Vikas 2 engine that generates 77,800kg of thrust. The Vikas engines shut down at T+2 minutes and 29 seconds for hot staging, accomplished by lighting the second stage prior to firing the separation pyros to enable the spent core to be pushed away by the second stage exhaust.

Starting out 70 Kilometers in altitude, the 81,500 Kilogram-force Vikas 4 engine of the second stage was tasked with a burn of two and a half minutes to accelerate the rocket by another 2.5 Kilometers per second. Immediately after staging, GSLV switched into Closed Loop Control after the first stage & boosters flew a pre-programmed attitude profile optimized to reduce loads when in the dense layers of the atmosphere.

The 3.2-meter diameter payload fairing split open and separated just shy of T+4 minutes when GSLV crossed 110 Kilometers in altitude where aerodynamic forces were no longer a threat to the satellite. Carrying close to 40 metric tons of hypergolics, Stage 2 fired its engine until T+4 minutes and 49 seconds before the 11.6-meter long stage dropped away from the Cryogenic Upper Stage for 12 minutes of nail-biting.

Shutdown of the CUS was expected right at the T+17-minute mark after the upper stage accelerated the stack by five Kilometers per second to achieve the target GTO injection speed of 9.6km/s. No target orbit parameters were released for Friday’s mission, though can be expected to be in line with previous GSLV missions that aimed for orbits of 170 by 35,975 Kilometers at an inclination between 19.3 and 20.6 degrees.

Separation of GSAT-9 was expected just seconds after engine cutoff and officials quickly declared launch success for the GSLV F09 mission, marking four in a row for the vehicle since its reboot in 2014.

GSAT-9 will rely on its Liquid Apogee Motor for a series of orbit-raising maneuvers to move up into a Geostationary Orbit to take up station at 48 degrees East.