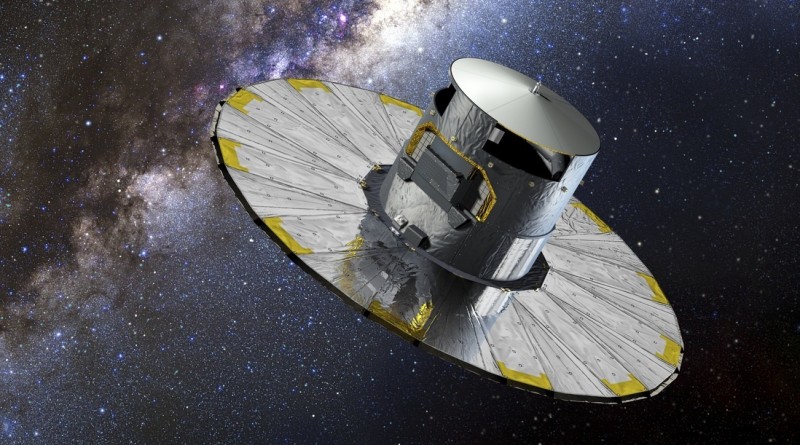 ESA’s Gaia star-mapping spacecraft is ready to begin science operations after an extended commissioning phase that became necessary due to persistent stray light problems that could diminish the accuracy of the instrument’s measurements of faint stars. Gaia is set for a science mission of at least five years to map one billion stars with never before seen accuracy.

Gaia was launched atop a Soyuz rocket back on December 19, 2013 and completed a flawless transfer to the Sun-Earth Lagrange Point 2 located 1.5 million Kilometers from Earth. Orbital insertion around L2 occurred on January 7 with a smaller clean-up maneuver one week later. Gaia’s insertion into its Lissajous Orbit around L2 marked the start of a planned three-month testing and commissioning campaign to prepare the high-fidelity instrument of the spacecraft for its mission. It soon became clear that more than three months would be needed to prepare the craft for observations.

The first images and data acquisition sessions with the instrument quickly showed an unexpected stray light problem observed in the form of diffuse illumination on the focal plane assembly. The stray light varied at a cycle of six hours – matching Gaia’s spin period of six hours.

Initially, teams suspected that the 10-meter sunshield of the spacecraft diffracted sunlight at the edge of the large shield that then entered the thermal tent and reached the detectors. To mitigate solar illumination of the telescope, the spacecraft was put into a different attitude reducing its angle to the sun from 45 to 42 degrees. With this lower angle, it was expected to be harder for incoming light to get diffracted on the edge of the sunshield. The operation of moving Gaia to the new tilt angle required a number of reviews and adjustments on the vehicle’s control system.

Meanwhile, telescope teams continued focus optimization by adjusting the position of the M2 mirror, the only adjustable mirror of the Gaia instrument. Co-focusing of the two telescopes by adjusting the secondary mirrors made good progress, and by April, commissioning of Gaia’s service module was complete. Also in late April, the best possible optical configuration was achieved after a displacement of three micrometers on the secondary mirrors, creating a well balanced and focused image that met the expectations.

Commissioning included detailed verifications of the data acquisition, storage and downlink sequence aboard the spacecraft to make sure all functions of onboard processing and downlink were as expected. Also, the complex ground segment needed for data processing was put through its paces to verify that all institutions involved in the mission were ready for the flood of data from the spacecraft.

After Gaia entered the 42-degree attitude, it became clear that stray light was still a problem. This indicated that the diffracted light from the edges of the sunshield was being reflected off ice inside the thermal tent, allowing it to reach the optical components, but there was no way to directly confirm this ice hypothesis. Bright light sources in the sky and their light being reflected to the optics also contributed to the stray light issue.

The origin of ice inside the spacecraft is well understood and was expected since trapped water would start outgassing once Gaia was in space and freeze out on the spacecraft surfaces at temperatures of under –100°C.

An ice-removal campaign was performed early in the mission to clear ice from the mirrors by heating them up before letting them cool down to their operational temperature – it was hoped that this heating would also remove ice from the thermal tent. Some ice was still found on the mirrors after the campaign and teams implemented more ice-removal heating cycles that used lower heating on the mirrors. Gaia returned to its nominal 45° attitude after stray light measurements since the communication system was optimized for this geometry.

The amount of stars that are detected will not be changed by the stray light, however, the accuracy of astrometric measurements will be decreased for faint stars up to magnitude 15. The same is expected for photometric measurements, while the radial velocity spectrometer will suffer the biggest impact of the stray light that can not be known until data processing is performed.

Another issue that had to be overcome by teams was tracking of the Gaia spacecraft – for precise science measurements to be acquired, the position of the spacecraft in space has to be known with high accuracy. Doppler tracking via ground-based radio stations allows the precise orbit of Gaia to be determined, but optical tracking using ground-based telescopes is also required for the determination of the position of Gaia on the plane of the sky.

For that, Gaia has to be visible to the telescopes, but it turned out that the vehicle was much fainter than expected, preventing the one-meter telescopes of the Ground Based Orbit Tracking campaign from picking up the spacecraft. A 2.0-meter telescope on La Palma and the 2.6m VST on Paranal were called up to provide the necessary visual measurements while Very Long Baseline Interferometry radio measurements were introduced to provide additional navigation data to achieve the required accuracy.

When teams thought they were on top of all issues, another problem came up as the Basic Angle Monitor that measures the angle between the two fields of view of the telescope at high precision was showing larger than expected changes in basic angle. These larger variations are being assessed and data processing tools are being developed to eliminate the effects of the variations in the final data products.

Initial science data products were released by the mission in June. The spectra of stars acquired with Gaia’s photometer and Radial Velocity Spectrometer showed the expected quality and matched data acquired with ground-based instruments. A good acquisition of data confirmed that Gaia was ready to collect science data after the finishing touches were made to observation techniques in June and July.

Gaia was approved to begin routine science operations on July 25, although some of the problems have not been fully addressed and some work remains to identify the cause of the stray light & further reduce its effects in data processing. Also, work is underway to implement special observation techniques for bright stars that were originally not planned to be observed with Gaia, but commissioning has shown that these sources can be measured, offering valuable scientific data.

As part of the first six months of the science phase, teams will further modify the scanning law and onboard data processing and also complete the final decontamination sessions to continue the removal of ice-build up on the mirrors.

Gaia will be making its astrometric and spectroscopic measurements over a period of five years. Data will be released in the form of several star catalogs at several points in the mission starting in 2016 with a final catalog being released after the completion of the science mission. An extension to the five-year science mission is possible. Originally, a one-year extension was planned, but recent measurements of Micropropulsion System propellant consumption showed that Gaia will likely be able to continue operations beyond the original mission extension, depending on the overall performance of the observatory.

Gaia’s core objective is to create the largest, most precise three-dimensional map of the Milky Way Galaxy by surveying more than one billion stars. All objects that are brighter than magnitude 17 will be measured by Gaia’s three instruments: the Astrometric Instrument, Photometric Instrument and Radial Velocity Sensor.

Each object will be studied 70 times over the course of the primary mission – logging their positions, distances, movements and changes in brightness as well as properties such as mass, temperature and chemical composition

Because of Gaia’s unprecedented sensitivity and accuracy, the mission is expected to discover hundreds of thousands of new celestial objects including extra-solar planets. Gaia also studies asteroids within the solar system and more distant quasars.

Data provided by Gaia will shed light on long-standing questions related to galactic structure and evolution, star dynamics, exoplanets and solar systems. Gaia provides data to identify which stars originally belonged to smaller galaxies that were swallowed by the Milky Way. Watching the large scale motion of a large number of stars can point to the distribution of dark matter throughout the galaxy.