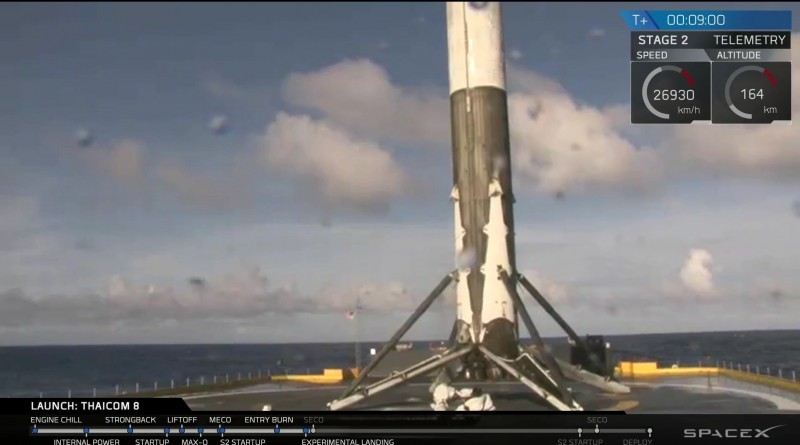 A SpaceX Falcon 9 rocket lifted off from Florida’s Space Coast Friday evening, dispatching a Thai broadcasting satellite into a highly elliptical orbit and nailing its second high-energy landing on the Autonomous Spaceport Drone Ship in the Atlantic Ocean, raising SpaceX’s inventory of returned boosters to four.

Falcon 9 successfully achieved the primary objective of the flight in deploying the 3,025-Kilogram Thaicom 8 satellite to its planned high-energy orbit. Though still classed as an experimental secondary objective, all eyes were once again on the first stage as it embarked on a speedy re-entry into the atmosphere for a landing on the ‘Of Course I Still Love You.’

Sticking its landing atop the floating platform in the Ocean, Falcon 9 followed in the footsteps of the surprise success achieved earlier this month when the booster mastered its first high-energy return. With three successful sea-based landings in a row, this latest booster return is certainly no fluke, however, expectations by SpaceX and company leader Elon Musk are to see a number of failures on a multi-year path to achieving operational re-use of flown rocket stages.


Friday’s flight marked the 25th launch of Falcon 9, the 5th of the Full Thrust Version and the fifth of this year as the company accelerates the pace of missions to tackle a busy manifest with up to 18 launches lined up for 2016.

Falcon 9 thundered away from Cape Canaveral at 21:39 UTC.

Taking the standard route to Geostationary Transfer Orbit, the 70-meter tall rocket flew to the south-east, focusing on the primary objective of the mission – the safe delivery of Thaicom 8 to a Supersynchronous Transfer Orbit. The first stage was in action for just over two and a half minutes before the MVac engine of the second stage fired to lift the stack first into a preliminary orbit followed by a second burn to raise the high-point of the orbit for spacecraft separation 32 minutes after liftoff.

While the satellite was still in the midst of its ride into orbit, Falcon 9 checked off its secondary mission objective when coming to rest on its four landing legs atop the Autonomous Spaceport Drone Ship after a speedy return from the edge of space and a speed of three times the speed of a bullet.

The launch of Thaicom 8 marked the second collaboration of satellite operator Thaicom PLC, satellite-builder Orbital ATK and launch provider SpaceX after the successful launch of Thaicom 6 in 2014. Thaicom selected Orbital and SpaceX for the company’s eighth satellite in April 2014 with a total project value of 178.5 million.

Taking a slot in Geostationary Orbit at 78.5° East, Thaicom 8 will join a pair of other Thaicom satellites to reinforce the broadcasting capacity from this particularly important orbital position. Outfitted with 24 Ku-Band transponders, Thaicom 8 will deliver TV broadcasting services to three zones in Eastern Africa, India and Thailand over a planned mission duration of 15 years or longer.

Turning around the Cape Canaveral launch facility in just three weeks, SpaceX headed into countdown operations several hours prior to the evening’s launch with the activation of the Falcon 9 rocket. Under the watchful eyes of controllers in a pair of Launch Control Rooms and SpaceX headquarters on the other side of the country, Falcon 9 underwent several hours of testing before being configured for its rapid propellant loading sequence.

Propellant loading picked up at T-35 minutes, the start of the Automated Countdown Sequence.

In the space of just half an hour, the two-stage Falcon 9 was filled up with over 500 metric tons of sub-cooled Liquid Oxygen and chilled Rocket Propellant 1 plus helium tank pressurant and nitrogen attitude control system propellant. Getting the tanks to flight level in as short a timespan is no small feat in and of itself, but SpaceX took it one step further by implementing a minimal margin of time in the Liquid Oxygen loading sequence, set to close out just two minutes prior to T-0, a minute ahead of tank pressurization.

While propellant flowrates were going through a carefully plotted throttling sequence, Falcon 9 checked off its final countdown milestones by chilling its engines for ignition, switching to battery power, retracting the Strongback structure, arming the Flight Termination System and starting-up the Flight Computers.

The typical green flash of Falcon’s igniter fluid erupted from the base of the 549-metric-ton rocket at T-3 seconds when the nine Merlin 1D engines were commanded to fire. A clean throttle-up to a collective liftoff thrust 694,000 Kilogram-force was verified before the hold-down system let go and Falcon 9 started rising.

Blazing uphill, Falcon 9 rolled onto its planned departure path, passing the speed of sound one minute and ten seconds after launch with Maximum Dynamic Pressure occurring at T+77 seconds, requiring the Merlin 1D engines to be throttled back briefly. Burning nearly 2,500 Kilograms of propellant per second, the first stage accelerated the rocket to a speed of Mach 6.8 at engine cutoff two minutes 35 seconds into the flight.

The first stage booster dropped away four seconds later, handing propulsive flight off to the MVac engine of the second stage. MVac, featuring an ultra-thin nozzle extension for optimal performance in the airless outer atmosphere, ignited close to two minutes and 50 seconds into the flight to generate up to 95,000 Kilogram-force of thrust to finish lifting the stack into orbit.

Stage separation showed considerable body rates, reminiscent of some earlier missions of SpaceX’s first steps in orbital flight. The attitude bias was immediately corrected by Stage 2 upon ignition – as seen by the Earth swinging from one side to the other in the onboard camera view.

Having done its primary job of sending the second stage on its way, the booster embarked on another high-velocity return – aiming for the small Autonomous Spaceport Drone Ship holding position in the Atlantic Ocean. Again looking forward to a hot re-entry, the first stage used its nitrogen thrusters to flip around and point its engines forward to set up for a short 20-second re-entry burn just after passing six and a half minutes into its flight – firing up three engines to slow down and shield the engine section from the most dynamic entry environment.

As the JCSat-14 mission has shown, Falcon 9 can survive even the most extreme entry environments, however, the F9-024 booster suffered considerable wear & tear during its plunge back into the atmosphere which has to be avoided when reaching for operational re-use of boosters with minimal refurbishment. One way is reducing the re-entry speed whenever reserve fuel supplies are available.

For this mission, the first stage burned 155 seconds from liftoff to MECO whereas for JCSat-14 the burn lasted 158 seconds. These three seconds provided the booster 7,400kg of additional fuel to be expended on the way down, extending the Entry Burn by up to nine seconds. Compared to JCSat-14, the re-entry speed was expected to be lower by around one Mach number.

Kinetic energy increases as a square of the velocity, and peak heating as a cube of velocity – so a reduction of speed around one Mach number makes a tremendous difference in the heating experienced by the first stage on the way down.

After the Entry Burn, the first stage guided itself to the Drone Ship by using its four actuated grid fins to modify the flight path towards the precise coordinates of the ASDS. No two-way communications are established between the Drone Ship and the Falcon 9 – both use an identical set of coordinates to meet up in the middle of the Atlantic.

Although re-entry on this mission was not as challenging as the last flight, landing certainly was as the booster fired up three of its engines to rapidly slow its descent in a period of just five seconds, then shutting down the outer engines and continuing the final descent powered by the Center Engine alone. This maneuver cuts gravity losses and is more fuel-efficient though takes away some maneuverability achievable when only using one engine for the landing.

Coming in hot and heavy, the booster deployed its landing legs a few seconds before hitting the deck and managed to set itself down in an upright posture – again sticking a high-risk landing. Launch Control called out the successful landing and controllers switched over to the recovery net for remote-safing of the landed rocket stage – still a novelty in the world of orbital launches as no other space-faring nation or company can land rocket stages after sending payloads on their way into orbit.

Touchdown was somewhat harder than previous landings, causing the ‘Contingency Crush Core’ to come into play to cushion the impact, a device Elon Musk describes as an “aluminum honeycomb for energy absorption in the telescoping actuator.” This is a replaceable part giving Falcon 9 the ability to survive corner-case landings at higher speeds. What implications the Crush Core actually crushing has on recovery operations is unknown.

Sending the payload into its planned orbit was the primary goal of Friday’s mission. Thaicom 8 was aiming for a Supersynchronous Transfer Orbit of 250 by 90,000 Kilometers, requiring the second stage to ignite its MVac engine twice.

The first burn of the throttleable MVac engine had a duration of six minutes and ten seconds, successfully pushing the stack into a Low Earth Parking Orbit – shedding the huge 13.2-meter long payload fairing along the way. Whether this flight implemented a test of fairing recovery systems was not announced in advance, though it is known that SpaceX is looking into the combination of propulsive stabilization and parachute systems to be able to recover payload fairing halves for re-use.

The second stage coasted for 18 minutes, continuing on its south-easterly trek to reach the equator for the critical second burn, set up to significantly raise the high point of the orbit, reduce the inclination and position apogee above the equator to ease the process of maneuvering the satellite to Geostationary Orbit.

27 minutes and seven seconds after launch, MVac soared up to its full thrust level for a burn of 73 seconds boost Thaicom 8 into Supersynchronous Transfer Orbit. Towards the end of the engine burn, MVac throttled down to maintain an acceleration of 5G.

Immediately after the end of the burn, Mission Control confirmed a good apogee reading according to onboard navigation data. To send Thaicom 8 on its way, Stage 2 nulled out attitude rates and started a slow spin-up for stabilization of the satellite.

Thaicom 8 was set free 32 minutes after liftoff, seen drifting off in onboard video provided by the second stage through ground stations in Africa. Over a period of days, the satellite will make its way into its operational slot in Geostationary Orbit, taking advantage of the extra energy delivered by Falcon 9, boosting the apogee to 91,000 Kilometers, well above the Geostationary Belt.

Checking off another success, SpaceX will focus on the next launch in line, a dual-payload mission of Falcon 9 lifting Eutelsat 117 West B and ABS 2A, both built by Boeing. This launch is aiming for mid-June (NET 16th) and will be followed by the next Dragon mission to the International Space Station on the books for July 16.