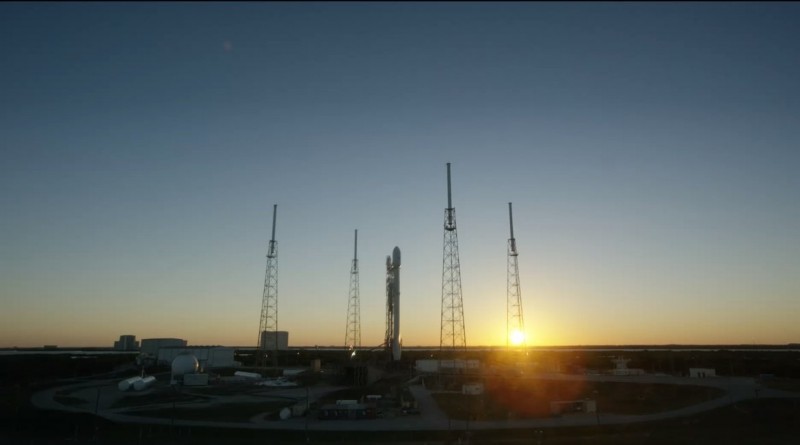 The countdown to the second launch of SpaceX’s Falcon 9 FT launch vehicle with the SES-9 communications satellite was aborted at the last minute on Thursday due to problems associated with the modified propellant loading sequence employed by the new Falcon 9.

A new launch date was not immediately announced by SpaceX as Thursday’s opportunity had already been the backup launch slot after a delay encountered on Wednesday.

Wednesday’s delay was called just over half an hour ahead of the day’s launch window opening time due to high ground winds and concerns associated with the temperature of the sub-cooled Liquid Oxygen. The use of LOX, cooled beyond its boiling point, had proved difficult back in December when SpaceX had to work through numerous attempts to master a clean propellant loading sequence as a requirement exists for the supercold propellant to stay aboard the vehicle for as short as possible to avoid it warming up ahead of liftoff, thus ensuring the tanks are at the expected flight mass when Falcon 9 blasts off.


SES-9 is the heaviest payload to be lifted into Geostationary Transfer Orbit by Falcon 9 and requires the entire performance of the vehicle, meaning that special attention has to be paid when looking at the mass of propellants loaded into the vehicle which is directly dependent on their temperature.

With no margins for this mission, especially on the second stage that will burn to depletion to deliver SES-9, SpaceX has to ensure the LOX is loaded at the coldest possible temperature in a compressed tanking sequence to prevent the propellant from warming up.

Throughout the multi-hour countdown operation on Thursday, Falcon 9 was very well behaved and there were no reports of any technical issues as the launcher was prepared for the fast paced events of the final countdown hour. All Stations reported a GO for propellant loading just 35 minutes ahead of liftoff and the -207°C LOX and -7°C Rocket Propellant 1 began flowing into the two-stage rocket with 30 minutes on the countdown clock.

At T-10 minutes, Falcon 9 entered its complex Automated Countdown Sequence to transition to its liftoff configuration – chilling down its engines, enabling its Flight Computers, arming the Flight Termination System and pressurizing its tanks. Liquid Oxygen continued to flow into the vehicle and was expected to reach flight level around three minutes ahead of liftoff.

At T-2 minutes and 5 seconds, the Launch Director instructed the Launch Team to hold the countdown at T-1 minute and 40 seconds and the familiar call of ‘Hold Hold Hold’ sounded at T-1:41 when clocks stopped and teams headed into immediate safing operations.

The reason for the hold was apparently that the LOX loading sequence was not finished in time to permit liftoff. This again shows the difficulty encountered when attempting to finish loading 500 metric tons of supercold propellant with only a minute to spare in an effort to squeeze the most possible performance out of the Falcon 9.

SpaceX said the Falcon 9 rocket was in a safe condition after the countdown abort and the launch team headed into de-tanking operations. Although this mission had a launch window of 97 minutes, SpaceX was forced to scrub the launch given the intricacies associated with the chilled propellants. The use of sub-cooled LOX requires the propellants to be unloaded and Falcon 9 to be re-tanked ahead of another attempt – a procedure taking longer than the available window time.

Sources familiar with the operational side of SpaceX pointed out that the benefits of sub-cooled LOX will eventually outweigh the challenges encountered while lessons are being learned to master the highly complex fueling sequence.

This particular mission, putting Falcon’s performance improvements to the test, does not offer much room for error. Missions with lower energies will likely allow for the propellant loading sequence to be decompressed or to insert hold times into the countdown as propellant temperatures (densities) will not be as constrained due to larger margins in launch vehicle performance.

SpaceX did not provide a new launch date for the SES-9 immediately after Thursday’s scrub. Since Thursday had already been the backup opportunity for this mission, SpaceX will have to work with the Eastern Range to align a new schedule based on operational constraints at Cape Canaveral Air Force Station.

Knock-on effects on the already delayed in-service schedule for SES-9 remain to be seen as the insertion orbit, a direct function of energy delivered by the launcher, is a significant driver for the satellite’s travel duration to Geostationary Orbit and again depends on SpaceX launching the Falcon 9 with the proper propellant mass in its tanks.