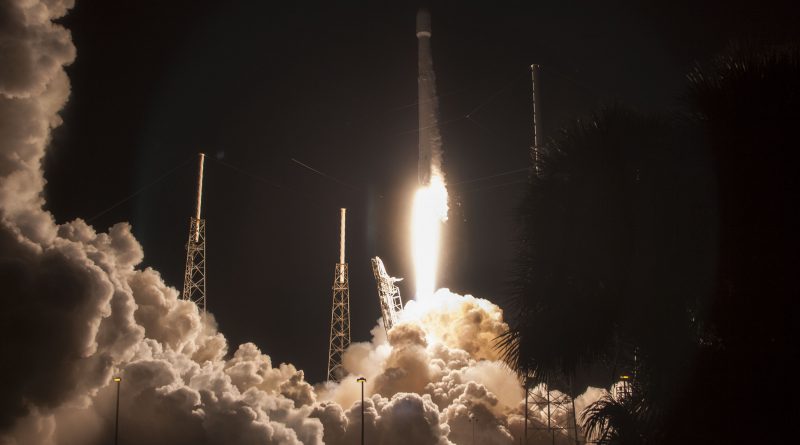 SpaceX earned double check marks Saturday night, successfully launching its Falcon 9 rocket to deliver the JCSat-16 communications satellite to a high-energy orbit and managing a perfect landing of the rocket’s first stage on the Autonomous Spaceport Drone Ship in the Atlantic Ocean to be ferried back to shore for continued re-use testing.

Falcon 9 lifted off from Cape Canaveral at 5:26 UTC on Sunday, 1:26 a.m. local time after an uneventful countdown and ascended into partly cloudy skies to head south-east on the standard route to Geostationary Transfer Orbit in a mission that is part of SpaceX’s bread-and-butter business. Weighing in at 4,600-Kilograms, the delivery of JCSat-16 left the rocket only the bare essentials in terms of surplus Kerosene and Liquid Oxygen propellant on the first stage to accomplish a sea-based landing.


The first stage fired its nine Merlin 1D engines for two minutes and 33 seconds to support the night’s primary mission, lifting the second stage to an altitude of 64 Kilometers and accelerating the stack to 2.3 Kilometers per second or about a third of the speed required to reach a Parking Orbit.

While the second stage fired up its MVac engine to power the satellite into a preliminary orbit around Earth, the first stage flipped around and continued on a ballistic arc – not completing a braking maneuver ahead of hitting the atmosphere.

A camera on the booster showed it deploying its four actuated grid fins for steering during atmospheric flight and three engines re-ignited five and a half minutes after liftoff to fire for 22 seconds in order to slow the stage to around two Kilometers per second and lower the thermal loads encountered by the vehicle during entry. SpaceX also developed new techniques to protect the engines during re-entry using onboard resources in order to preserve the engines for re-flight and prevent fluids from heating excessively to ensure a controlled re-start for landing.

Out in the Atlantic, over 600 Kilometers from the Cape Canaveral launch site, the Autonomous Spaceport Drone Ship ‘Of Course I Still Love You’ was waiting for the first stage that announced its nighttime arrival with a sonic boom. This mission had enough propellant reserves to use a single-engine landing burn which is less fuel efficient than a maneuver with three engines but affords the vehicle more time to make corrections during the final descent upon the floating platform for landing just under nine minutes after launch.

A camera mounted on the Drone Ship showed signs of the first stage’s engine plume before the video feed cut out for a brief period. When the video returned, the 47-meter tall first stage was standing right in the bullseye of the large SpaceX logo painted on the ship’s deck. Some small fires at the base of the rocket self-extinguished after a while and landing operators went into safing of the first stage.

This marked SpaceX’s sixth successful landing of a first stage after an operational mission, the fourth successful drone ship attempt and the third recovered booster after a Geostationary Transfer Orbit mission.

Just before the first stage’s journey came to a successful conclusion, Stage 2 arrived in a slightly elliptical parking orbit for a coast phase of 17 minutes to set up for the critical second burn. Traveling across the Atlantic, the stage went through a gap in telemetry communications before being picked up by a tracking station in Gabon, Africa to cover the re-start of the second stage.

MVac fired up again 26 and a half minutes after launch and went through a 4.6G throttling segment toward the end of the minute-long burn that aimed to raise the apogee to Geostationary Altitude and provide a slight reduction in inclination.

After the burn, the second stage re-oriented and damped body rates to set up for the separation of the JCSat-16 satellite into an elliptical orbit peaking around 36,000 Kilometers in altitude. The spacecraft was sent on its way at T+32 minutes with onboard video showing the satellite cleanly separating from the upper stage to mark the successful completion of the primary mission of the night.

JCSat-16 was the second satellite launched by the SpaceX Falcon 9 for satellite operator Sky Perfect JSAT this year after May’s successful launch and landing success with JCSat-14. After climbing into Geostationary Orbit to cover the Japanese territory, JCSat-16 will enter a backup role within JSAT’s satellite fleet to ensure service continuity and provide flexibility when responding to growing market demands. The SS/L-built satellite hosts a Ku/Ka-Band communications payload to deliver video and data distribution services.

The spacecraft has been built to be multi-mission capable and can operate from different orbital positions as part of JSAT’s constellation.

First up for JCSat-16 will be a temporary assignment at 162 degrees East in Geostationary Orbit where it will replace the Superbird B2 satellite that is at the end of its operational life. Originally, this satellite was supposed to be replaced by Superbird 8 after being launched on an Ariane 5 but the spacecraft encountered damage when being shipped from its manufacturer Mitsubishi Electric. The satellite will be repaired for liftoff in 2017 which will free up JCSat-16 to take another position in Geostationary Orbit.

For SpaceX, the focus is now on getting the first stage back to Port Canaveral to complete a very detailed inspection of the booster to compare it to the JCSat-14 and Thaicom 8 boosters that endured similar re-entry environments but did not yet have the capability of protecting their engines in flight.

SpaceX has exceeded their own expectations for the number of successful landings this early in the program and is now proceeding to shift from learning how to land their rocket to the question of how to land and relaunch.

The company hopes to continue tweaking the return sequence of the boosters to optimize the condition they are in when arriving back on shore for minimal refurbishment between flights.

Earlier this month, SpaceX demonstrated three static fire tests on the JCSat-14 booster in a period of just three days to repurpose the vehicle as a benchmark to evaluate the wear and tear the stage and all components experience after each round of testing. These ground tests on hardware that experienced the worst possible flight environment will clear boosters that returned in better condition to be re-flown.

For SpaceX’s re-use business model to work, almost all land-based landings have to succeed while more challenging barge landings are successful at least half the time.

Whether the JCSat-16 vehicle will be the first that can re-fly after a GTO mission remains to be assessed via post flight inspections performed after the booster returns to shore in the coming days.

For SpaceX, the pace of launches will pick up toward the end of the year with missions lined up from both operational launch sites. Next on the Cape schedule is the launch of the AMOS-6 communications satellite that will once again require an ocean-based first stage landing. The SpaceX launch site at Vandenberg on the West Coast will return to service in September after January’s Jason-3 launch that marked the last flight of the Falcon 9 v1.1 version.

Lined up on the Vandenberg manifest is the first of seven Falcon 9 launches with ten Iridium NEXT satellites into a 780-Kilometer orbit to establish a 70-satellite constellation by the end of 2017. The first launch is currently expected on September 20 and is likely to feature the first attempt to return a Falcon 9 booster to its West Coast landing pad, provided construction at Vandenberg’s SLC-4W has been completed.

The first re-flight of a Falcon 9 first stage remains planned for the autumn time frame, though no customer for that mission has been officially announced yet. Satellite operator SES said publicly that the company was interested in becoming the first to fly on a used Falcon 9 and two SES satellites are currently on SpaceX’s 2016 manifest. SES-10 is on the books for a mid-October launch and SES-11 is expected to follow suit within a month or two.