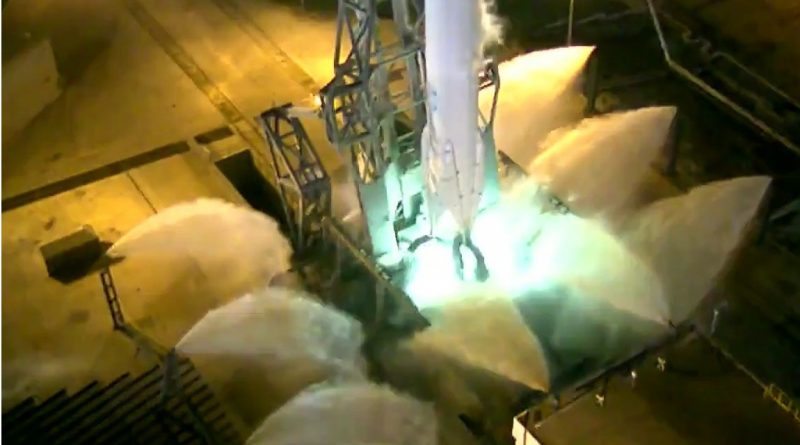 SpaceX completed the Static Fire Test on the company’s Falcon 9 rocket ahead of its next commercial satellite launch set for the early hours on Sunday. The brief firing of the nine Merlin 1D engines of the rocket’s first stage occurred Wednesday night and serves as a final critical test to clear the path for launch day.

Falcon 9 is carrying the JCSat-16 satellite for Japanese satellite operator Sky Perfect JSAT, marking the rocket’s fifth trip to Geostationary Transfer Orbit this year and the second with a JCSat payload after the successful launch with the JCSat-14 satellite in May that also was the first mission to achieve a first stage landing after a high-energy delivery.

Liftoff is set for Sunday during a two-hour window opening at 5:26 UTC, 1:26 a.m. local time at Florida’s Space Coast. The mission, taking Falcon 9 south east across the Atlantic, will require just over half an hour from liftoff to the separation of JCSat-16 into a highly elliptical orbit from where it will be up to the satellite to make its way into Geostationary Orbit.


Sunday’s mission marks SpaceX’s seventh launch of the year and the company is hoping to complete rapid launch turnarounds at its Cape Canaveral launch site as well as the West Coast pad at Vandenberg to fly out the 2016 manifest that could include as many as ten Falcon 9 missions still to come.

Sunday’s planned mission comes less than one month after SpaceX’s last flight with the Dragon SpX-9 spacecraft currently in the midst of its stay at the International Space Station. Setting up for for the next mission, SpaceX was seen moving the first stage for this mission from Hawthorne, California where it was built to the McGregor Test Site in Texas for an acceptance test performed with every brand new stage after leaving the factory. After satisfactory testing in mid-July, the booster was packed up and shipped to Cape Canaveral within one week of the Dragon launch.

The departure of the booster from Texas vacated the test stand for the F9-0024 first stage that lifted JCSat-14 in May and returned to a Drone Ship landing. This stage was placed on the stand and completed three consecutive full-duration test firings in the space of only three days in SpaceX’s ongoing efforts to test and certify their flight hardware for upcoming re-flights of first stages.

Joined by the second stage in the hangar at Space Launch Complex 40, Falcon 9 completed assembly which entails the attachment of the first to the second stage as well as the installation of the grid fins and landing legs on the 47-meter long booster.

The JCSat-16 satellite started its final processing campaign at the Cape around one month ahead of its planned launch date, being shipped across the country by satellite manufacturer Space Systems Loral, based in Palo Alto, California. Arriving at the launch site, the satellite completed a final testing campaign and was fueled for flight before being installed atop its payload adapter and the encapsulation in the protective payload fairing.

JCSat-16 is set to join the satellite fleet operated by Sky Perfect JSAT in a backup role to ensure fleet redundancy and to add flexibility in times of peak communications demands. The satellite, weighing in at around 4,600 Kilograms, is outfitted with a multi-mission Ku/Ka-Band payload that can serve the Japanese market from multiple orbital locations to deliver video distribution data transfer services.

2016 marks a busy year for Sky Perfect JSAT, having already launched the JCSat-14 satellite on the SpaceX Falcon 9, now looking ahead at the launch of JCSat-16 and also gearing up for the delivery of JCSat-15 – another SS/L satellite – currently expected to lift off toward the end of the year on an Ariane 5.

Gearing up for Sunday’s mission, SpaceX performed a dress rehearsal at Space Launch Complex 40 last weekend and Falcon 9 returned to the pad in the afternoon on Wednesday for the Static Fire Test – a milestone that has been part of every SpaceX launch flow since the Falcon 1 days.

The test – comprised of a full propellant loading sequence and brief firing of the first stage – serves as a final verification of the integrity of the propellant systems on both stages, their pressurization systems, avionics and the ground support systems in operation during the countdown. Soaring up to a maximum sea level thrust of 694 metric-ton-force, the nine Merlin 1D engines were closely monitored and performance data was gathered to allow for a thorough assessment of engine performance.

It is also understood that the Static Fire was used to evaluate new techniques for launch window management which had become a challenge when Falcon 9 FT was introduced, given the strong desire to avoid the sub-cooled Liquid Oxygen to warm up during holds in the count.

A brief window for holding exists in the final countdown minutes prior to engine chilldown, but SpaceX was aiming to expand this capability to take advantage of longer windows such as JCSat’s two-hour launch slot.

With the Static Fire complete, the team conducted a brief review to ensure the engines fired for the full duration and the expected data was captured. Falcon 9 was then cleared for de-tanking to be returned to the hangar where it will meet its JCSat-16 payload ahead of returning to the pad on Saturday to head into an overnight countdown.

The Launch Readiness Review will be conducted on the basis of Static Fire Data at the end of the week to clear the vehicle to proceed into final launch preparations.

As another shot to Geostationary Transfer Orbit with a relatively heavy satellite, this mission will again require the Drone Ship to be placed in the Atlantic for the experimental landing of the first stage. No surplus propellant is available for a boost-back maneuver and Falcon 9 will be looking at another high-energy re-entry similar to that on the JCSat-14 mission that left the booster with what was characterized as ‘maximum damage.’

However, SpaceX is hopeful to recover future GTO boosters in better shape using newly developed techniques to protect the first stage engines in flight. Due to the vehicle’s orientation, the engines face the most challenging environment during entry explaining why SpaceX was looking into procedures using onboard resources to protect the engines. Activities such as flowing Kerosene through the engines can assist in easing the thermal environment of the engines and a) ensure they can ignite for landing and b) preserve their condition for re-flight.

Completing a brief re-entry burn followed by a landing burn starting with three engines before throttling down to only the center engine, the booster will hopefully come to rest atop the Autonomous Spaceport Drone Ship eight and a half minutes after liftoff, but the maneuver remains experimental and may not succeed given the high stresses encountered by the booster – as seen in the Eutelsat/ABS mission in June that ended a streak of three successful landings.

The ASDS ‘Of Course I Still Love You’ and its support vessels left Port Canaveral on Tuesday to begin a trek to a position over 600 Kilometers from Cape Canaveral to await the arrival of the first stage for another nighttime landing attempt.

Weather for Sunday’s launch is looking very promising with a 90% chance of favorable conditions during the two-hour window. Cumulus clouds and coastal showers are the primary concerns from a weather standpoint and the backup launch slot is also looking good although weather is expected to worsen slightly into next week.