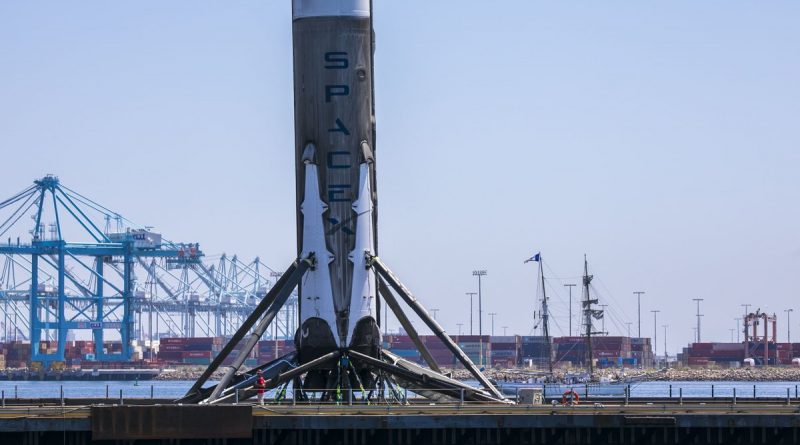 The booster, identified by serial number #1036, is a prime candidate for re-use given it experienced a fairly gentle re-entry environment. The previous booster coming back from an Iridium delivery (#1029) already checked off its first re-use mission on Friday with BulgariaSat-1 out of Florida and is currently inbound to Port Canaveral after also managing a successful landing.

Falcon 9 blasted off on the Iridium-2 mission at 20:25:18 UTC on Sunday, leaving Space Launch Complex 4E at Vandenberg Air Force Base to the south in order to reach the desired high-inclination orbit, targeting Plane 3 of the six-plane Iridium constellation. Rising out of a bank of fog under the power of its nine Merlin 1D engines, Falcon 9 was headed uphill with a total thrust of nearly 700 metric ton force.


The first stage – having accelerated the rocket to some 1.9 Kilometers per second – separated just before the T+2.5-minute mark, sending the second stage on its way toward orbit and wasting no time to begin homing in on the JRTI Drone Ship, holding position around 300 Kilometers from the launch site. JRTI was around 70km closer than for the last Iridium mission, mainly due to a faster initial turnaround and boostback that allows the booster to reduce overall travel distance.

Sunday’s landing was complicated by weather conditions in the downrange landing area, actually requiring the drone ship to be relocated shortly before launch into calmer waters to preserve as least some chance of a safe recovery. With the new coordinates of the ship programmed into its flight computer, the first stage swung around to an engines-first position immediately after staging and fired up its center engine at T+2:43 followed six seconds later by two outer Merlins for a boostback of around 27 seconds, controlling the vehicle’s forward velocity to adjust the downrange travel distance.

The new titanium grid fins deployed while Falcon 9 was beginning to fall back toward the atmosphere, making their debut on a Block 3 core, set to become a standard feature for all Block 4 and 5 vehicles. Around 16% longer than the previously used aluminum grid fins, the new system provides greater control authority – a requirement for Falcon Heavy but also beneficial for Falcon 9 when facing tough wind conditions for landing. Switching from aluminum fins with a protective coating to the more durable titanium fins will eliminate post-flight refurbishment as the titanium system will be able to fly virtually indefinitely without needing any touch-ups.


The booster re-started its engines – again in a staggered fashion with the center leading the way at T+5 minutes and 53 seconds for a 19-second re-entry burn to slow down by around 550 meters per second prior to encountering the peak heating portion of re-entry. Effects of the unsettled weather became evident through fairly strong vibration on the way down as well as plenty of steering action by the grid fins to keep Falcon 9 on course toward the Drone Ship.

Live camera views from the JRTI Drone Ship showed the sea swells were quite significant and the Drone Ship’s deck was far from being a stable landing surface. Descending through dense clouds, the booster fired up its center engine on what was going to be a 32-second landing burn to arrest its vertical velocity, employing a radar-guided system in the final moments of the descent.

The 47-meter tall booster unfolded its four landing legs and came to a gentle descent toward the Drone Ship, however, likely due to downward motion of the ship, the stage shut down its engine some distance above the deck, free falling for a very brief moment before making contact with its four landing legs. Remaining upright, the booster came to rest in a fairly centered position on the Drone Ship, marking SpaceX’s second successful Pacific-based recovery.

All in all, SpaceX is now 13/18 for first stage recoveries and 8/13 for Drone Ship Landings with Sunday’s recovery being the ninth consecutive recovery success.

Following the successful touchdown, Falcon 9 was safed remotely before workers could access the Drone Ship to secure the booster on deck for its journey back to the Port of Los Angeles. Pulled by Kelly C and accompanied by NRC Quest, JRTI was set for a three-day trip back to shore, arriving in port around noon local time on Wednesday.


Per the standard post-landing procedure, Falcon 9 was to be lifted off the barge and placed on a stand on the ground followed by draining remaining Kerosene and igniter fluid from the vehicle, removing the landing legs and placing the vehicle on a transporter for the ride back to the Hawthorne manufacturing facility, around 20 Kilometers north of the port as the crow flies.

Booster #1036 is a good candidate to undergo refurbishment for re-flight as early as later this year, provided SpaceX can find a customer willing to make the switch from a new rocket. Iridium Communications purchased all-new Falcon 9 rockets for its eight missions, however, the company recently indicated it was willing to look into flying on a previously used vehicle if it brings a schedule advantage.

SpaceX is currently offering only a 10% discount to operators willing to fly on a flight-proven rocket as the company recoups some $1 billion in investments for the development of the reusable first stage and ground infrastructure like Drone Ships and Landing Pads.

Eventually, that discount will climb to around 30%+, but for now, the major advantage of choosing a used first stage comes in a schedule advantage as production of new first stages has been a particular bottleneck in establishing a rapid launch cadence. Having an inventory of recovered boosters could help SpaceX deal with a crowded manifest and insurance providers may be put at ease after a series of re-flight missions.

The ten Iridium-NEXT satellites placed in orbit on Sunday have all been reported in good condition by their operator, now entering a testing and commissioning phase that will end with five satellites spiraling up from their initial 625-Kilometer orbit into the operational Iridium constellation at 780 Kilometers while the other five are drifted from Plane 3 into the two adjacent planes – a process taking several months.

Photos: Second Batch of Iridium-NEXT Satellites gets ready for Liftoff

June 20, 2017 Patrick Blau Comments Off on Photos: Second Batch of Iridium-NEXT Satellites gets ready for Liftoff