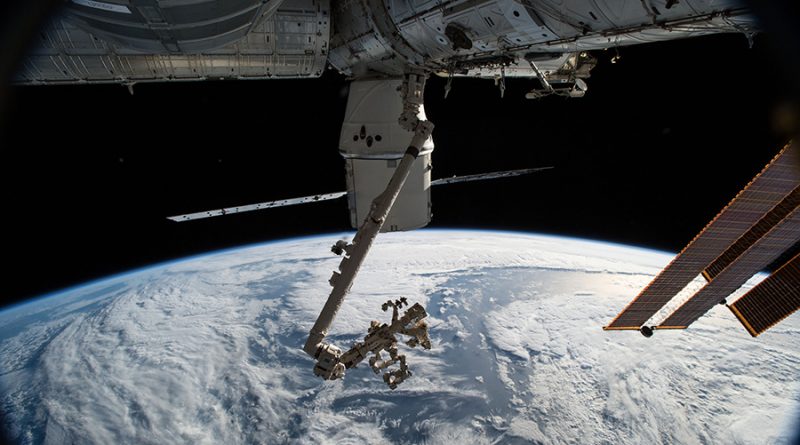 SpaceX and NASA are working towards a Saturday ISS departure and splashdown landing of the Dragon SpX-13 spacecraft after a month-long stay at the International Space Station highlighted by a busy science schedule for the crew in orbit and the addition of two new external payloads dedicated to climate science and studies of the space debris environment.

Loaded with final return cargo over the course of the week, Dragon will be detached from the Space Station’s Harmony module late on Friday by the Station’s Canadarm2 that will position the spacecraft for a ground-controlled release at 10:00 UTC on Saturday to mark the beginning of a five-and-a-half-hour home-bound journey for the twice-flown Dragon.

The spacecraft will fire up its Draco thrusters for a rocket-powered braking maneuver before dropping its trunk section and re-entering the atmosphere toward a parachute-assisted splashdown in the Pacific Ocean at 15:36 UTC around 600 Kilometers west of Baja California where SpaceX recovery personnel will be standing by to recover the spacecraft and nearly two metric tons of return cargo.


SpaceX’s 13th operational cargo mission was the first to employ a previously-flown Falcon 9 first stage and a flight-proven Dragon spacecraft as the company continues its drive to make re-use routine. Lifting off from Cape Canaveral on December 15th, Dragon C108 received a smooth ride into orbit, returning to space after spending 37 days in orbit as part of the SpX-6 mission back in 2015. Dragon arrived on the Station’s doorstep on December 17 and was successfully captured by ISS crew members Mark Vande Hei and Joe Acaba followed by ground-controlled robotics to berth the spacecraft to the Earth-facing port of the Station’s Harmony module.

Dragon’s four-week stay had a busy schedule – inside and outside the Station. The crew was tasked with moving 1,560 Kilograms of pressurized cargo to the Station side, perform a number of experiments that rode on the Dragon and then re-pack the spacecraft with some 1,860 Kilograms of return cargo.


On the outside, the Station’s robotic duo – the 18-meter long Canadarm2 and two-armed Dextre robot – had the task of moving two external payloads (645kg) to their new home on ISS and replacing them inside Dragon’s trunk with a disposal payload.

First to be pulled out of Dragon’s trunk was TSIS – the Total and Spectral Irradiance Sensor – with extraction occurring on December 29 before the payload spent a night on the EOTP (Enhanced ORU Temporary Platform) to receive heater power while the arm was re-positioned for installation of TSIS on Express Logistics Carrier 3 Site 5 from where the instrument will point toward the sun to measure its energy input to Earth.

TSIS was reported installed in the late hours of December 30 and activation of the instrument occurred at 1:41 UTC on December 31st followed by launch lock release and deployment of the optical bench,

TSIS hosts two instruments: the Total Irradiance Monitor – powered up and checked on January 2nd – and the Spectral Irradiance Monitor that went through its checks January 3-5. Working together, the two instruments will measure the total energy input from the sun to extend a vital climate record of what is considered one of the most critical climate variables that has been continuously tracked since 1978. Additional commissioning in January should see the instrument become fully operational.

Next up for the Dextre Robot was the Space Debris Sensor (SDS), one of the largest of its kind to be deployed to Low Earth Orbit to study the population of micro-debris which can not be measured remotely and requires instruments to be deployed for direct data collection. SDS was pulled out of the Trunk on January 1st and, unlike TSIS, only had to cover a few meters on the robotic arm to reach its installation location on the Columbus External Facility where the sensor will be facing the ram-direction that offers the highest probability of debris strikes.

SDS, characterized by a large active area, will be active for at least two years, employing a combination of detection methods to collect information on the size and energy distribution of micro-debris in Low Earth Orbit. A continuous sampling capability is considered critical when attempting to understand the dynamic evolution of the LEO debris environment and SDS, through at least two years of continuous operation, is expected to shed significant light on the population of debris 50 to 500 micrometers in size.

RapidScat, the ISS Rapid Scatterometer, was removed from Columbus and its two components – the Instrument Assembly and Nadir Adapter – were installed on two FRAMs in the Dragon Trunk to be disposed of via destructive re-entry. The RapidScat instrument was delivered to ISS by the Dragon CRS-4 mission and its spinning antenna had become a familiar sight for those regularly watching the Space Station’s live video feeds as the instrument collected wind speed measurements by bouncing microwave pulses off the Earth’s oceans.

RapidScat, in many ways, paved the way for ISS to become an Earth-observation platform as it was the first instrument specifically designed to operate on the Space Station – taking advantage of the Station’s power, data and pointing systems. It encountered a power failure in August 2016, just one month shy of reaching its design life of two years, and was declared failed for good that November, beginning a process of scheduling its disposal from ISS that is now realized via the Dragon spacecraft.

While the Station’s robots were in action outside, the four USOS crew members aboard the Station worked a busy schedule of experiments since many of the studies traveling up on the Dragon were also expected to ride back to Earth on the same spacecraft to be analyzed by their operators. Notable studies of the SpX-13 mission come from various fields of science and technology, looking into the production of ultra-high-quality optical fibers in the absence of gravity, studying a synthetic bone material that could accelerate bone repair, and looking at the assembly of three-dimensional structures suspended in fluid without the presence of gravity which is relevant for the production of advanced optical materials and electronic components.

The Dragon also ferries the Rodent Research 6 experiment, the seventh deployment of the Rodent Habitat to the International Space Station – involving a group of 40 “Mousetronauts” participating in a study exploring a novel drug that promises to slow and/or reverse muscle atrophy suffered by astronauts on long-duration missions and Earth-bound patients with muscle-wasting diseases. Saturday’s landing will mark the homecoming of 30 mice to study their re-adaptation to gravity while the other group gets to enjoy space for another four weeks, but is not lucky to have a return ticket.

In charge of Saturday’s Dragon release are NASA Astronauts Joe Acaba and Scott Tingle, but if all goes as planned their role will be only in a monitoring capacity as the Dragon CRS-13 mission aims to become the first visiting vehicle release performed by ground controllers.

Previously, dynamic operations like capturing and releasing vehicles, were only performed by ISS crew members given their better situational awareness through the out-the-window view offered by the ISS Cupola. But as the Station’s robots expand their operational repertoire, taking as many tasks off the crew’s timeline can free up valuable time for research and therefore it is desired to use ground-controlled robotics for as many tasks as possible.

Letting go of the Dragon, the robotic arm will maneuver to a safe distance to Dragon in preparation for the craft’s first departure maneuver. With the crew standing by in case of issues, they could easily switch over to the Cupola Robotics Workstation and complete release in manual mode should anything be amiss with the new ground-controlled procedure that has been in the works for five months.

Recovering from Free Drift, the Dragon will make an initial departure burn three minutes after release to move away from ISS along the R-Bar or radial vector. Another short pulse of the Draco thrusters comes 90 seconds after the first maneuver to accelerate Dragon’s departure along the R-Bar.

Once outside the Keep Out Sphere, Dragon will make its third and largest departure maneuver to depart the Approach Ellipsoid, pulling out in front of ISS to enter a five-hour free flight toward a rocket-powered braking maneuver to drop out of orbit. One of the critical events of the Free Flight is the closure of the GNC Bay Door to protect the navigation sensors inside from the harsh re-entry environment. Firing the Draco thrusters for around ten minutes, Dragon will be slowed by around 100 meters per second, placing it on a path toward the dense atmosphere for a fiery re-entry.

Splashdown is expected 625 Kilometers south-west of the Californian Coast where recovery forces will be awaiting the arrival of the vehicle. In previous cases, Dragon’s landing was very close to the bulls-eye target, allowing teams on the recovery ships to track a large portion of the vehicle’s descent under its three main parachutes.