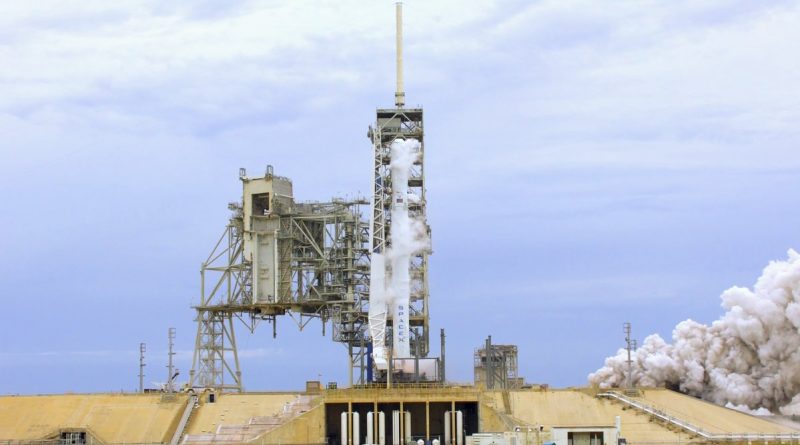 SpaceX checked off a Static Fire Test on the Falcon 9 rocket slated for launch on Monday with the Dragon SpX-12 cargo vehicle to the International Space Station to deliver science cargo and provisions for the Station’s six-person crew plus a state-of-the-art particle detector to measure ultra-high energy particles from the distant universe.

The third Dragon mission of the year is targeting a liftoff time at 16:31 UTC, marking the start of a ten-minute ascent into Low Earth Orbit and an eight-minute round trip for the rocket’s first stage that is aiming for a propulsive return to Landing Zone 1 a few Kilometers south from the Launch Complex 39A launch pad.

Monday’s launch will be the first SpaceX mission in over a month following a busy opening of 2017 with a fairly steady launch cadence of one flight every two weeks, in part supported by superb performance by the former Saturn V and Space Shuttle launch complex. The month-long pause was primarily due to maintenance tasks on the Eastern Range in progress through much of July after SpaceX completed a four-mission streak in a period of just over a month.


The semi-annual interruption of Eastern Range operations was used for a variety of maintenance and enhancement tasks that would have been difficult to conduct between missions in an active range. These operations included maintenance on the various range communication assets, replacement of power system components and moving the online services of the 45th Weather Squadron to new servers.

While Cape Canaveral was not in a posture to support rocket launches, SpaceX kept busy by continuing dismantling the former Space Shuttle Rotating Service Structure at LC-39A and working on the pad’s ground computer system that was implicated in the back-to-back countdown aborts on the Intelsat 35e mission in July.

The first mission off the ground after the range maintenance period was expected to be the Atlas V rocket carrying NASA’s TDRS-M communications satellite which had been targeting an August 3 liftoff until a mishap during final close outs caused damage to the satellite’s omni S-Band forward antenna – requiring several days for replacement and re-testing of the component. NASA initially decided to keep priority on TDRS-M and worked with SpaceX to delay the SpX-12 launch from August 10 to the 14th. However, when it became clear that TDRS-M would not be ready for launch until August 18, NASA reshuffled missions and SpX-12 was advanced a day to an August 13 launch target.


The initial Static Fire date of August 8 was moved to the 9th and a minor issue on the launch vehicle side pushed the test another day to Thursday, also causing a launch slip back to the previous target of August 14. The Falcon 9 rocket – still missing the Dragon payload – emerged from its Horizontal Integration Facility Wednesday afternoon, rolling up the ramp to the LC-39A pad and taking its vertical launch position to be in a position to enter countdown operations early on Thursday.

The Static Fire Test – in use by SpaceX since the Falcon 1 days – represents a final end-to-end test of all launch vehicle systems as well as an exercise of ground support equipment to rule out any surprises on launch day. After initial checks, the Falcon 9 rocket headed into its accelerated hour-long propellant loading sequence to receive over 500 metric tons of sub-cooled Liquid Oxygen at -207°C and chilled Rocket Propellant 1 at -7°C. The second stage – although a passive bystander in the hot-fire test of the first stage – also completed a full fueling & pressurization cycle to validate the integrity of its systems.

Ignition of the nine Merlin 1D engines on the first stage was marked at 13:10 UTC on Thursday, 9:10 a.m. local time and the firing appeared to achieve its planned 3.5-second duration. Quick data reviews by engineers verified the firing met its planned duration and all performance parameters were captured before clearing Falcon 9 for de-tanking for eventual return to the HIF to meet the Dragon spacecraft. The test also exercised the revamped ground computer system that had caused repeated trouble on Falcon’s most recent launch from Florida.

F9/CRS12: Here’s a shot of the hot fire test from the roof of the CBS News bureau at KSC pic.twitter.com/pbBBrD4xuy

The fueled-Dragon made its trip to LC-39A in the overnight hours to Friday in preparation for integration on the Falcon 9 Friday and Saturday to be ready for rollout on Sunday to facilitate the late cargo loading procedure completed inside 24 hours to launch via a mobile white room rolled up to the Dragon while Falcon 9 is in a horizontal position.

The rocket is expected to be moved to vertical in the early hours on Monday to set up for a lengthy period of launch vehicle testing and range preparations ahead of the propellant loading operation to set up for an instantaneous launch opportunity.

Thundering off with a thrust of nearly 700 metric ton-force, Falcon 9 will depart Cape Canaveral to the north-east, firing its first stage for under two and a half minutes to send the MVac-powered second stage on its way to dispatch Dragon into orbit via a burn of close to seven minutes while keeping sufficient propellant reserves for the booster’s return to shore. The 47-meter tall first stage will return via the proven scheme comprising a boost back maneuver immediately after separation to accelerate back toward Cape Canaveral, a propulsive maneuver at re-entry to begin hitting the brakes and a final half-minute landing burn using only the center engine to set the booster down on its four fold-out landing legs.


For Dragon, the mission will begin with separation from the rocket one minute after engine shutdown, to be followed by priming of Dragon’s thrusters and the deployment of the two power-generating solar arrays. Dragon will complete a series of orbit-raising maneuvers to arrive at the Station’s doorstep two days after launch, approaching from directly below to set up for a robotic capture to mark the start of a month-long docked mission.

The Dragon SpX-12 mission is the last newly-built Dragon 1 spacecraft to launch with SpX-13 through 20 planned to be flown by refurbished spacecraft that made previous visits to ISS. This allows SpaceX to focus resources on the production of Dragon 2 that will fly in a crew and cargo configuration to support ISS crew rotations through the end of the program and make at least six cargo deliveries under NASA’s Commercial Resupply Services 2 program.

The sole trunk payload on this mission is CREAM, the Cosmic Ray Energetics and Mass Instrument, that will take up residence on the Station’s porch, the Exposed Facility of the Kibo Module to measure ultra-high energy particles to further knowledge in high-energy astrophysics, hoped to answer long-standing questions on peculiarities of the cosmic spectrum.

The internal cargo is comprised of 916 Kilograms of science investigations, 339kg of maintenance hardware, 220kg of crew supplies and 83kg of computer supplies & EVA equipment. Hitching a ride aboard the Dragon are two groups of mice, one group flying on the U.S. Rodent Habitat as the sixth Rodent Research flight and the other is hosted by the JAXA Mouse Habitat Unit – both experiments are looking into the effects the space environment has on various bodily systems, using the mice as a model organism for humans. Both groups will live aboard ISS for a month before returning to Earth alive for post-flight studies.