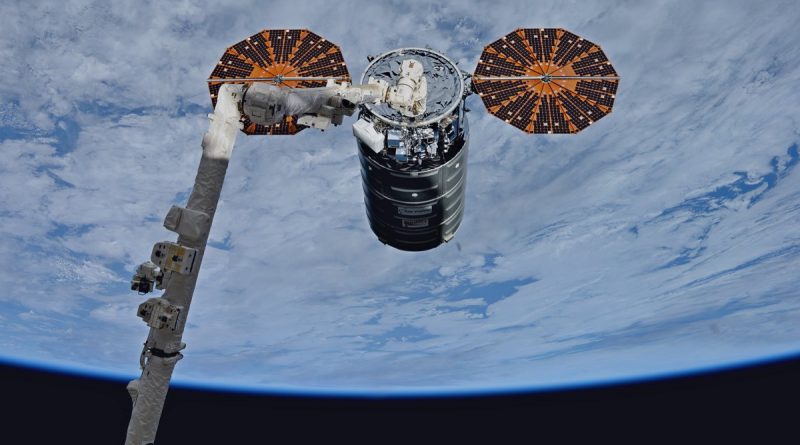 
The 6,200-Kilogram Cygnus spacecraft started out in an orbit of 300 by 331 Kilometers at the expected inclination of 51.63 degrees. Solar array deployment occurred after the vehicle made its first lap around the planet and Mission Controllers in Dulles, Virginia were able to give Cygnus a clean bill of health after initial checkouts in orbit. Within a few hours of launch, Cygnus completed its first large orbit-raising maneuver with its BT-4 main engine, lifting the apogee to 360 Kilometers.


Joint operations between Dulles and NASA’s Mission Control Center in Houston began before Cygnus was given clearance for its first Approach Delta-V Burn and a coelliptic maneuver that positioned the craft 1.5 Kilometers below ISS. Next was the Approach Initiation Maneuver that put the spacecraft on a path to intercept the Station’s R-Bar to arrive at a position around 350 meters straight below ISS.


The crew then handed robotics off to controllers on the ground for the berthing operation which has become close to routine by this point. Moving swiftly through their procedures, ROBO controllers maneuvered Cygnus into its pre-berthing position on the Earth-facing Common Berthing Mechanism of the Unity Module. With the help of the Centerline Berthing Camera System, Cygnus was positioned with millimeter accuracy before capture latches were closed to establish first stage capture.