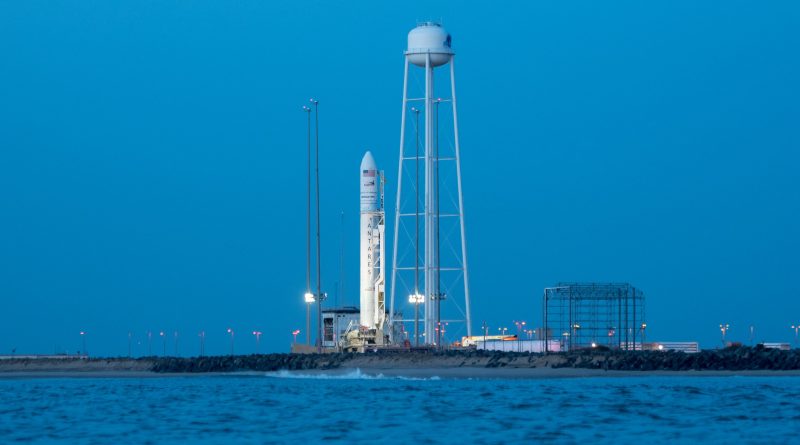 Orbital ATK is gearing up for the company’s second Cygnus mission of the year, targeting liftoff atop an upgraded Antares 200-series rocket Saturday morning from the Wallops Flight Facility. Cygnus OA-8, christened the S.S. Gene Cernan after the late Moonwalker, is loaded with 3,338 Kilograms of supplies for the International Space Station plus 14 CubeSats that are to be deployed into a higher orbit after Cygnus departs the Space Station after a planned three-week stay.

Cygnus OA-8 is the fifth U.S. resupply mission to the International Space Station this year coming after three successful SpaceX Dragon missions and the OA-7 mission that launched on an Atlas V rocket back in April. Orbital ATK, in coordination with NASA, opted to put the OA-7 spacecraft on an Atlas V, as had been done with the OA-4 and 6 missions that flew while the Antares rocket stood down following the October 2014 launch failure on the Orb-3 mission that sent the rocket back to the drawing board to be fitted with new engines.


Antares 230, sporting imported RD-181 engines from Russian manufacturer NPO Energomash, flew for the first time on the OA-5 mission in October 2016. However, the decision to switch the OA-7 mission was made to ensure the flight could depart on time and take pressure off Orbital ATK’s Antares team that had worked long hours on the path toward the critical return to flight mission.

Orbital ATK informed NASA they would be ready to support a launch of OA-8 in the summer and the flight was scheduled for a mid-September liftoff for some time before NASA requested the mission to be pushed two months to wait for more cargo to be ready.

Liftoff from Virginia’s Eastern Shore is set for a five-minute window opening at 12:37:25 UTC on Saturday with weather odds showing a 95% chance of favorable conditions despite freezing temperatures expected through the night. Temperatures at liftoff will be on the low end but still within allowable limits for the Antares launcher that is supplied conditioned purge flow to keep the Cygnus spacecraft, avionics bay and engine section at the appropriate temperatures with the primary temperature-related concern being an extended cold soak on the second stage’s solid rocket motor.


The 42.5-meter tall Antares rocket took its vertical launch position atop Pad 0A at the Mid-Atlantic Regional Spaceport on Thursday following a pre-dawn rollout from its Horizontal Integration Facility.

The Cygnus OA-8 spacecraft is loaded with 3,229 Kilograms of pressurized cargo, packed into a cargo carrier built in Italy that resides atop a Service Module built by Orbital ATK and holding the power-generating solar arrays, maneuvering thrusters and proximity navigation systems for the craft’s link-up with the International Space Station. Cargo packed into the spacecraft consists of 740 Kilograms of science investigations, 1,240kg of crew supplies, 851kg of vehicle hardware and 166kg of spacewalk equipment and computer resources.

The Cygnus OA-8 spacecraft has the highest cargo upmass of all Cygnus spacecraft launched by Antares rockets, in part enabled by stellar performance of the upgraded Antares rocket demonstrated on the OA-5 launch in 2016.

On that mission, conservative design margins were employed to ensure a safe delivery of Cygnus into its planned orbit, though post-flight analysis showed that the first stage still had considerable propellant reserves when it reached its velocity target and shut down the engines.

To that end, Saturday’s first stage burn will be extended by five seconds compared to OA-5, raising the overall ascent performance and allowing Cygnus to take on more cargo. Future refinements of Antares’ performance capabilities and minor upgrades are expected to add another 200kg of possible upmass which would allow Cygnus to be packed to its maximum capacity of 3,500kg.


In addition to pressurized cargo, Cygnus is carrying 109kg of unpressurized cargo, holding fourteen CubeSats that will be deployed into an orbit around 100 Kilometers above ISS after Cygnus completes its supply delivery. Among the CubeSats of the OA-8 mission are several commercial satellites as well as technology demonstration and research missions flown by NASA to study the behavior of antibiotic-resistant E. coli bacteria in space and test out a new type of communications antenna that could boost CubeSat data rates by a factor of 100.

Countdown operations will kick off eight hours ahead of the opening of the brief launch window on Saturday. Controllers will report to console to open the Launch Checklist, beginning with a Call to Stations ahead of activation of the Antares launcher for a multi-hour checkout campaign involving the avionics and communication systems while, in parallel, range assets at Wallops are readied for the launch and teams finish close outs of the rocket and launch complex.

The launch vehicle is activated at L-5 hours to begin a Combined Systems Test with the Cygnus spacecraft that verifies that all systems on the vehicles can communicate and function as advertised. Testing includes C- and S-Band communication checks, telemetry verifications, Cygnus systems checks, a final Mission Simulation Test and Flight Termination System checks.

After activation of the Propellant Loading Sequencer, pad systems will enter conditioning for propellant loading – being pressurized and chilled down before the first stage of the two-stage rocket will head into oxidizer tank chilldown. Starting at L-1 hour and 55 minutes, the Yuzhmash-built first stage will be loaded with over 170 metric tons of liquid oxygen and nearly 65 tons of Rocket Propellant-1.

Only the 27.6-meter long first stage of the Antares rocket has to be loaded during the countdown – the second stage is a 26-metric-ton Castor 30XL Solid Rocket Motor that will be tasked with giving Cygnus the final push into orbit.

At T-5 Minutes, the Flight Termination System and Antares Launcher are switched to internal power. Starting at T-3 minutes and 30 seconds, the countdown will enter its automated phase that is controlled by the Auto Sequencer and involves final reconfigurations of Antares to put it in its launch configuration, notably the pressurization of tanks, the handover of control, transfer to internal power & arming of the termination system.

The twin RD-181 engines will rumble to life by injecting liquid oxygen and ignition fluid into the gas generators and combustion chambers to begin driving the turbopumps and reach a liftoff thrust of 392 metric-ton force, creating an initial thrust to weight ratio of 1.3 compared to 1.16 for the previous iteration of the Antares rocket.

Immediately after lifting off, the two engines will gimbal to move the tail end of the rocket away from the Transporter-Erector-Launcher that will retract at the moment of launch. Completing a pitch and roll maneuver, Antares will swing to the south-east to intercept the orbital plane of the International Space Station.

Antares will pass the speed of sound around one minute into the flight followed a few seconds later by Maximum Dynamic Pressure, flying a pre-programmed attitude profile on the first stage optimized for load relief in the dense atmosphere.

Because of the higher performance and flow rates of the new engines, Antares will have a shorter first stage burn time compared to the 100 Series, shutting down around three minutes and 34 seconds into the flight. The 3.9-meter diameter core stage is jettisoned six seconds after shutdown, marking the start of a passive coast phase to allow the vehicle to climb uphill so that the second stage burn can raise the perigee to orbital altitude.

Just before ignition of the Castor 30XL, Cygnus will be revealed when the two ten-meter long fairing halves will be split open and drop away as aerodynamic forces are no longer a factor outside Earth’s dense atmospheric layers. The 1-2 Interstage Adapter is also jettisoned while the vehicle is in coast flight to shed unnecessary weight ahead of the upper stage burn.

Ignition of the Castor 30XL occurs at approximately T+4 minutes and 23 seconds, 150 Kilometers in altitude to give Cygnus the final push to reach orbit. Castor 30XL provides an average thrust of over 300 Kilonewtons over the course of its 2-minute 38-second burn with a peak thrust level at 396kN. The second stage uses energy management to precisely inject the payload into its desired orbit and correct any errors that occurred during first stage flight.

Previous Cygnus missions targeted a 210 by 290-Kilometer insertion orbit inclined 51.6 degrees from where the spacecraft will use its BT-4 main engine to link up with the Space Station in its nearly circular orbit just over 400 Kilometers in altitude.

Following burnout of the second stage seven minutes and six seconds into flight, the vehicle will again coast in order to allow residual thrust to tail off on the solid rocket motor to ensure a clean spacecraft separation. A cold gas thruster system provides attitude control during the passive flight phase and orients the stack for the separation of the payload.

Sent on its way nine minutes and three seconds after liftoff, Cygnus will establish a stable three-axis orientation and initiate communications through the Tracking and Data Relay Satellite System. The critical deployment of the spacecraft’s two circular UltraFlex solar arrays is expected to commence 90 minutes into the flight and will take around 15 minutes before teams will be able to confirm they have a power-positive spacecraft ready for the climb to the Space Station.

The spacecraft will start maneuvering later on Saturday to begin raising its orbit while also closing the gap toward the Space Station to set up for proximity operations Monday morning with Cygnus approaching from behind and below before reaching a point directly under ISS where a straight-up approach to the capture point will commence.

Coming to a halt within reach of the Station’s robotic arm, Cygnus will hold perfectly still to be captured by ESA Astronaut Paolo Nespoli who will be at the control of Canadarm2, backed up by ISS Expedition 53 commander Randy Bresnik. Upon berthing to the Unity module of ISS, Cygnus will be opened for business for a fairly short docked stay that is currently expected to end on December 4, in time before the next Dragon spacecraft arrives at the Station as the last U.S. resupply vehicle of the year.