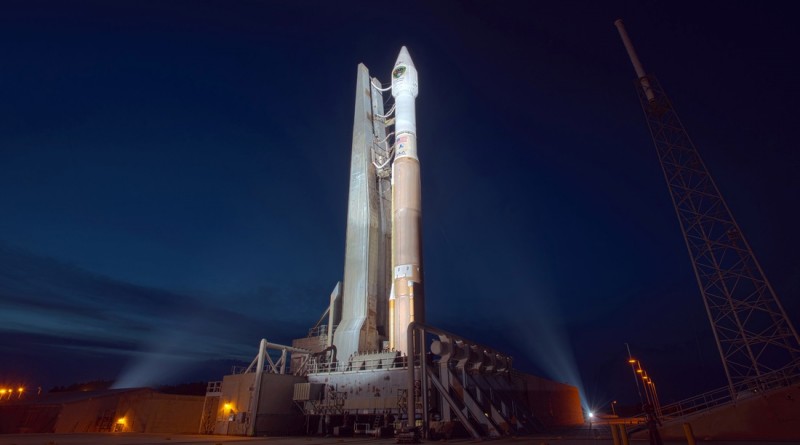 A United Launch Alliance Atlas V rocket is at the launch pad at Cape Canaveral Air Force Station for a Friday morning liftoff with the GPS IIF12 satellite to complete the deployment of a dozen GPS Block IIF satellites in the continued replenishment and modernization of the GPS satellite constellation that currently hosts 30 active spacecraft. Liftoff from Space Launch Complex 41 is planned for a 19-minute window opening at 13:38 UTC and Atlas V will be tasked with a three-hour and 23-minute mission to an orbit over 20,000 Kilometers in altitude.

This launch opens a very busy year for United Launch Alliance with as many as 15 launches on the books for 2016 for a wide customer base ranging from NASA, the U.S. military and the National Reconnaissance Office to commercial satellite operators. ULA’s 2016 manifest includes launches of the Atlas V and Delta IV launch vehicle families from both coasts of the United States, aiming to continue a trend of a steadily increasing launch rate.

GPS IIF12 is the final of the twelve Boeing-built GPS Block IIF satellites to enter orbit, marking the conclusion of one of the most aggressive deployment schedules with eight GPS IIF satellite launches in a period of two years. The Block IIF satellites introduce additional navigation signals, a higher accuracy, longer operational in-orbit lives and improved security. Each of the satellites has a mass of 1,630 Kilograms and equipped with two high-stability Rubidium clocks and a single Caesium atomic clock to provide accurate navigation signals. The first IIF satellite went into orbit back in 2010.

GPS IIF-12 was delivered to Florida’s Space Coast back in October to begin its final processing campaign filled with testing of the satellite, propellant loading and eventually the installation atop the payload adapter and inside the fairing. The Atlas V rocket was stacked in the first half of January as the RD-180-powered Common Core Booster took its place atop the Mobile Launch Platform and had its Centaur Upper Stage installed to mark the start of testing activities. GPS IIF12 was installed atop its ride to space on Saturday.

GPS IIF12 was the final satellite to be processed for launch at Cape Canaveral’s Navstar Processing Facility where, for 27 years, a total of 61 satellites were readied for launch. With the inauguration of GPS IIIA next year, processing is shifted to the off-site Astrotech facility in Titusville where most satellites launching from Florida pass through on their way to the pad. Area 59 at CCAFS does not currently have a future user and evaluations of options are currently underway to work out what is to be done with the facility.

The launch of GPS IIF12 was delayed two days last week as additional time was needed for checks of electrical connectors on the launch vehicle. Wednesday’s Launch Readiness Review cleared the rocket for liftoff as no problems were found on the launch vehicle, the satellite and ground support systems.

The 58-meter tall Atlas V workhorse emerged from the Vehicle Integration Facility in the early morning on Thursday, sitting atop its Mobile Launch Platform for a 30-minute ride to the pad. Carefully centered on the pad, the MLP will be connected to ground systems for the delivery of propellants, power, gas supply and data connectivity during the final preparations for the countdown. The trackmobiles used to move the MLP will be pulled free later on and teams will begin closing out the rocket and ground systems for countdown operations, starting seven hours prior to the expected T-0 time.

Weather for Friday’s launch attempt holds the potential of coming into the way of an on-time liftoff of the Atlas V rocket. Odds of acceptable weather during the 19-minute launch window are only 40% with primary concerns being high ground winds and violations of the thick cloud rule. Cape Canaveral is currently under the influence of a cold front bringing showers and thunderstorms along with winds gusting to 28KT. Winds are expected to trend down throughout the day on Friday and meteorologists have issued an 80% chance of good weather for the backup slot on Saturday with Cumulus Clouds being the primary concern.

At T+4:20, the RL-10C engine of the Centaur Upper Stage will ignite on its first of two burns. This 12-minute and 44-second burn delivers the stack into an elliptical Parking Orbit around Earth for a coast phase. The orbit is targeting an apogee at GPS altitude so that the long coast will allow the stack to climb up to apogee for the second burn to act as circularization maneuver and inject the payload in the GPS orbit. The long coast is planned to be just over three hours in duration.

The Centaur Upper Stage will begin its second burn at T+3 hours 17 minutes and 4 seconds. The RL-10 engine will burn for one minute and 27 seconds to raise the perigee and achieve a circular orbit at 20,459 Kilometers in altitude and an inclination of 55 degrees. Following Centaur engine cutoff, the stack will maneuver to the correct attitude to send GPS-IIF12 on its way at T+3:23:16. The Centaur upper stage completes a Collision and Contamination Avoidance maneuver and undergoes passivation to conclude its mission.