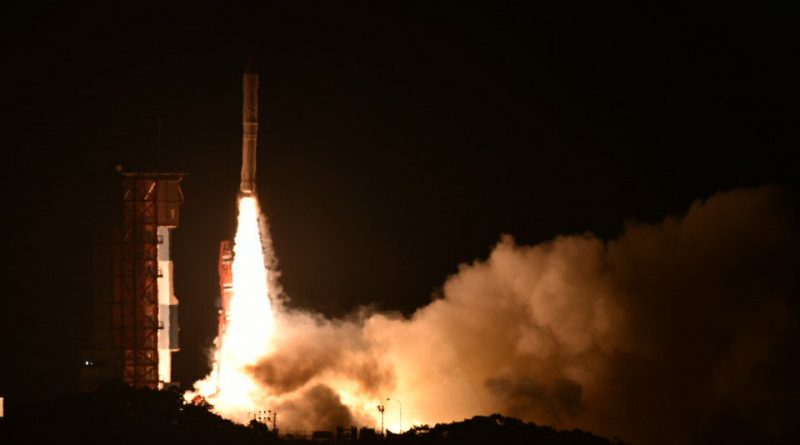 Liftoff from the Uchinoura Space Center occurred at 6:06 a.m. local time, 21:06 UTC on Wednesday and Epsilon’s three solid-fueled stages lifted the vehicle into orbit in less than ten minutes before the rocket’s Post Boost Stage took over for a pair of engine burns to set up the proper orbit at an altitude of 500 Kilometers above the planet. Separation of the 570-Kilogram radar satellite occurred 43 minutes after liftoff after a seemingly flawless ascent mission by the Epsilon rocket.


The ASNARO Program (Advanced Satellite with New system Architecture for Observation) finds its roots in 2008 as a government-funded initiative for the development of a high-capability small satellite platform with an open architecture to reduce manufacturing cost and implementing state-of-the-art technology for robustness & performance. The result was the NEXTAR line of satellite platforms developed by NEC Corp. for different applications for Earth-observation missions and other operational payloads. NEXTAR has shown excellent flight performance on the first ASNARO mission launched in 2014 and the ERG geospace mission that launched on Epsilon in 2016.

The ASNARO program has been outlined to demonstrate the versatility of NEXTAR by employing the platform for three different instrument payloads: ASNARO-1 carries a high-resolution optical imaging system reaching a ground resolution better than 0.5 meters, ASNARO-2 – launched on Wednesday – hosts a high-performance Synthetic Aperture Radar and the ASNARO-3 mission will carry a specialized hyperspectral sensor.


ASNARO-2 hosts a 220-Kilogram X-Band Synthetic Aperture Radar package set for a demonstration of a small-sized SAR payload complying with the restrictions imposed by a small satellite platform (i.e. volume, data downlink volume & electrical power) while matching the performance of a large SAR satellite. The XSAR instrument comprises a three-segment antenna with a transmit power of up to 1.5 Kilowatts and a new type of gridded-pulse Traveling Wave Tube Amplifier in its front end electronics.

ASNARO-2 can achieve a ground resolution exceeding one meter when operating in high-resolution mode, covering a ten-Kilometer ground frame. Utilizing the satellite’s agile attitude control system, ASNARO-2 can operate in ScanSAR mode and scan adjacent ground strips to cover a swath width of over 50 Kilometers at a moderate resolution of around 16 meters.

Radar can be used for all-weather, day-and-night imaging delivering data relevant for Earth observation applications in a variety of areas such as environmental monitoring and disaster management as well as operational use in ship and sea-ice tracking. Given the different imaging modes supported by ASNARO-2, the satellite represents a powerful tool for all-weather imaging and may build the foundation of future small satellite SAR missions.

ASNARO-2 targets an operational orbit of 504 Kilometers at an inclination of 97.4 degrees with a Local Time of Descending Node at 6:00 hours – a typical dawn-dusk orbit that is the desired orbital destination for radar satellites as it allows the satellite to be illuminated for its entire orbit to aid power generation which is one of the biggest factors for a radar mission with high transmit power. Operating at the same altitude but in different planes, ASNARO-1 and 2 will be available for multi-time observations in high-resolution optical and very sharp radar vision.


Wednesday’s launch marked the third mission of Japan’s Epsilon rocket, designed as a low-cost launch vehicle for scientific and operational missions in the 500-Kilogram class. Epsilon, flying in its baseline configuration, debuted in 2013 with the Sprint-A (Hisaki) space observatory and the Enhanced Epsilon – offering a performance increase of 30% – flew for the first time in 2016 to launch the ERG mission studying energetic particles in Near-Earth Space.

The design of the Enhanced Epsilon was largely driven by the performance requirements of ERG and the ASNARO missions, requiring the rocket’s Sun Synchronous Orbit capacity to be improved from 450 to 590 Kilograms. Improvements focused on stripping the rocket of dry mass, beefing up the second stage to hold more solid propellant, and eliminating complex deployable nozzle designs from the second and third stage in favor of rigid, vacuum optimized nozzles to enhance the overall robustness of the vehicle.

The rocket’s four-stage configuration (Epsilon CLPS) flew for the first time on Wednesday, also implementing a performance boost on the hypergolic-fueled Post Boost Module that now has a greater propellant capacity, allowing it to burn three minutes longer than the baseline version.

Epsilon has been designed as replacement for the M-V rocket that was retired in 2006 due to its excessive launch cost of up to $90 million per flight – quite high for a medium-lift, all-solid launch vehicle. The goal for Epsilon is coming in at half that price with future reduction as the vehicle matures and incorporates increasing amounts of autonomy to reduce personnel.

Epsilon, from the start, was designed with cost reduction in mind – using proven components from Japan’s other lines of rockets and employing a high-degree of automation during countdown and flight operations.

The Enhanced Epsilon stands 26 meters tall, measures 2.6 meters in diameter and weighs 95,600 Kilograms when flying in its four-stage version – comprising three solid-fueled stages that do the bulk of the lifting needed to send a satellite into orbit while the Post Boost Module corrects dispersions and completes the final injection.

All of the solid stages have been inherited from other Japanese launch vehicles: the first stage is a modified SRB-A3 booster from the H-II rocket family, M-35 is based on the second stage from the M-V using a different propellant formulation and the KM-V2c third stage also flew on the M-V.

Epsilon entered countdown operations three hours prior to the opening of the day’s 24-minute launch window when the launch table was rotated out of the Service Structure to position the rocket for liftoff. Power-up on the vehicle came at T-2 hours 40 minutes for a series of automated checkouts, all in the control of ROSE – the Responsive Operation Support Equipment, in charge of all countdown events to T-1 second.

With a clean vehicle, clear range and acceptable weather, teams allowed Epsilon to press into a 70-second terminal countdown phase. The rocket switched to battery power at T-55 seconds, armed its pyrotechnics, switched to flight mode and completed the irreversible step of powering up the thermal battery driving the thrust vector control system on the first stage and igniting a solid-fueled side jet for roll control during flight.

Epsilon jumped off its launch pad at precisely 21:06:11 UTC when firing up its first stage and shooting skyward with a thrust of 240 metric-ton-force, making for a very fast initial climb with a thrust to weight ratio of 2.5. Lighting up the night skies over Uchinoura, Epsilon burned through 600 Kilograms of propellant every second of powered flight – entering an initial flight path to the south-south-east to clear the Philippines and frequented fishing areas before making a right-hand turn later in flight to reach the desired orbital inclination.

Thrust on the first stage tailed off 108 seconds into the mission after accelerating Epsilon to a speed of 2.3 Kilometers per second for a brief ascending coast phase of less than one minute. As Epsilon coasted through 123 Kilometers in altitude, it split open and dropped the 9.2-meter payload fairing halves to shed no-longer-needed weight before ignition of the second stage.

The 11.7-meter long first stage dropped away at T+2 minutes and 41 seconds to clear the way for ignition of the M-35 second stage four seconds later to continue the push toward orbit with a thrust of 45 metric-ton-force over a 129-second burn. Taking advantage of a propellant load of 15 metric tons realized by widening its diameter, the second stage burned 27 seconds longer than its predecessor and raised the vehicle’s speed by 2.8 Kilometers per second.

After thrust on the M-35 tailed off, Epsilon entered its second coast phase just over a minute and a half in duration to continue climbing from 210 to 242 Kilometers. M-35, before departing the stack, fired a set of spin-up thrusters for stabilization during the third stage burn. Separation occurred six minutes and 30 seconds into the mission and KM-V2c fired up after a four-second delay to increase the vehicle’s speed by 3.2km/s and inject it into a preliminary orbit.

Generating ten metric-ton-force of thrust, the third stage fired until T+8 minutes and 2 seconds and then used a reaction nozzle to spin down. It departed the stack just shy of T+10 minutes, handing off to the Post Boost Stage tasked first with stabilizing its orientation before completing two engine burns to lift ASNARO-2 into its target orbit and correct errors by the three lower stages.

The Post Boost Stage fired up its 0.4-Kilonewton Hydrazine thrusters fourteen and a half minutes after liftoff on a planned burn of five minutes and 16 seconds to transition the stack from a preliminary orbit into an elliptical Parking Orbit peaking around 515 Kilometers in altitude. Real time telemetry indicated the burn went as planned and the mission transitioned into a 23-minute coast phase to climb to the high point of the orbit where the circularization maneuver was to occur.

PBS re-started its engines 43 minutes into the flight on a burn of just over seven minutes, tasked with injecting ASNARO-2 into its target orbit of 494 by 509 Kilometers from where the satellite will maneuver into its operational orbit as part of commissioning activities.

The successful separation of the satellite was confirmed 52.5 minutes into the flight. While all flight events appeared nominal, a formal confirmation of launch success will be provided by JAXA after reviews of data from the satellite to confirm its health.