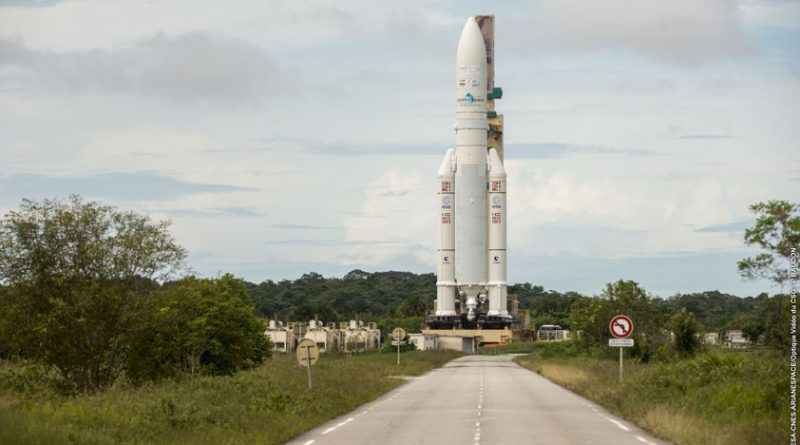 Europe’s Ariane 5 rocket stands ready for liftoff from South America on Wednesday on another heavy haul into Geostationary Transfer Orbit with a pair of satellites for India and commercial operators Inmarsat and Hellas Sat. Launch from the ELA-3 pad at the Guiana Space Center is targeting a 77-minute window opening at 20:59 UTC and it will take Ariane 5 a little over 40 minutes to send its two passengers into a highly elliptical orbit.

Wednesday’s launch will be the fourth flight of the heavy-lift workhorse in 2017 and the seventh for launch services provider Arianespace this year, putting the company back on its original schedule laid out for 2017 after having to catch up with three missions that were affected by a month-long stand still at the space port due to a social movement in March and April.


Inmarsat-S / HellasSat-3 is a shared spacecraft between London-based Inmarsat and Hellas Sat, a division of ArabSat providing services in Europe and Africa. The project was born out of the EuropaSat concept put forward by Inmarsat in 2008 to create a powerful mobile communications satellite which was ultimately abandoned in 2009 until its revival five years later as a joint satellite project with the two companies sharing the cost of the satellite platform and the launch while paying the entirety of their respective payloads hosted by the spacecraft.

The 5,780-Kilogram satellite – based on Thales Alenia’s Spacebus-4000C4 – carries a powerful S-Band payload operated by Inmarsat and a high-power Ku/Ka-Band package for operation by HellasSat.


Inmarsat, a leading mobile telecommunications provider, will use the S-Band payload as part of the European Aviation Network, providing three large spot beams over the 2x15MHz spectrum covering the entire European Union for aviation passenger connectivity as well as safety services for Public Protection and Disaster Relief across Europe. Three of the satellite’s six antennas are used by the Inmarsat payload, creating spot beams over the Iberian Peninsula, a Central Europe Beam and an Eastern European Beam.

The HellasSat-3 section of the condosat comprises 47 Ku-Band and one Ka-Band transponder that will be used to deliver Direct-to-Home Television in standard, high and ultra-high definition as well as other telecommunications services to Hellas Sat’s existing customers and allow the company to tap into new markets in the Middle East and Southern Africa. The multi-beam Ka-band payload is commissioned to provide capacity for broadband and business networks.

The 5.2-meter tall Inmarsat-S/HellasSat-3 rides in the upper payload slot of the Ariane 5 rocket, joined beneath the Sylda adapter by GSAT-17, a multi-band communications satellite built by the Indian Space Research Organization for operation by central telecommunications provider Insat. The 3,477-Kilogram satellite is the 21st ISRO spacecraft orbited by Arianespace and carries a hybrid Fixed and Mobile Satellite Services payload.

The VA238 launch campaign has been another smooth one as part of a streamlined operations flow at the Guiana Space Center, typically with two Ariane 5 campaigns in work at any given time plus operations related to Soyuz and Vega which also fly several times per year.

Operations kicked off with the delivery of the Ariane 5 launcher in mid-May followed by stacking of the vehicle that included the installation of the EPC Core Stage on one of two operational Launch Tables followed by the attachment of the twin Solid Rocket Boosters that will deliver the majority of the rocket’s thrust on Wednesday and the installation of the ESC-A second stage which is tasked with the final push to orbit for the two passengers.

Both payloads entered their final launch flow at the space base by the end of May with a last set of checkouts before both were fueled for flight and found their way to the Final Assembly Building where the Ariane 5 rocket was waiting to receive its payloads – GSAT-17 taking the lower slot directly above the second stage followed by the installation of the Sylda with Inmarsat/HellasSat already sitting atop. The 55-meter tall rocket moved to the Launch Pad on Tuesday and entered a lengthy countdown operation at 9:36 UTC on Wednesday – setting up for a late afternoon liftoff.


Initial countdown operations include final close outs of the launch facility and power-up of the Ariane 5 rocket for several hours of detailed checks of the various subsystems to ensure the control system of the vehicle is operating to specification.

Propellant loading is initiated five hours prior to T-0 with the chilldown of transfer lines and propellant tanks before supercold Liquid Oxygen stored at -183°C and Liquid Hydrogen at -253°C are pumped into the two stages of the rocket. The 30.5-meter tall first stage will enter propellant loading first at T-4 hours and 38 minutes followed 40 minutes later by the second stage. Loading of the rocket with 184 metric tons of propellant will take approximately two hours and tanks will be kept at flight level throughout the rest of the countdown.

The twin boosters will separate from the still-firing core stage at T+2 minutes and 19 seconds, using a pyrotechnic separation system to drop away from the rocket, headed toward a crash landing in the Ocean. With the boosters gone, it will be up to the Vulcain 2 engine to continue pushing Ariane 5 towards orbit with a vacuum thrust of 136 metric ton-force.

The protective payload fairing will be jettisoned three minutes and 17 seconds into the flight when Ariane 5 will have departed the discernible atmosphere. Shutdown of the core is expected at T+8 minutes and 52 seconds with separation of the spent rocket stage six seconds later to clear the way for the critical second stage burn. Ignition of the HM-7B engine will come four seconds after staging on a burn of 16 minutes and two seconds to push the stack into a highly elliptical orbit with a thrust of over six metric tons.

The VA238 mission is targeting an orbit of 250 by 35,786 Kilometers, inclined 3.0 degrees as Ariane 5 is not carrying its maximum mass into orbit, enabling some reduction of inclination. Powered flight will end at T+25 minutes and four seconds, marking the start of the complex ballistic phase to prepare for the separation of the satellites.

Inmarsat-S/HellasSat-3 will be up first, departing the Sylda adapter 28 minutes and 17 seconds into the flight, heading off on its own mission that starts with orbital circularization to take a position at 39 degrees East from where it can deliver services to Europe, the Middle East and Africa. Riding shotgun, GSAT-17 will be revealed when the Sylda separates at the T+30-minute mark followed by another ten minutes of coasting ahead of separation of the Indian satellite that is aiming for a slot at 93.5° East for its operational mission.