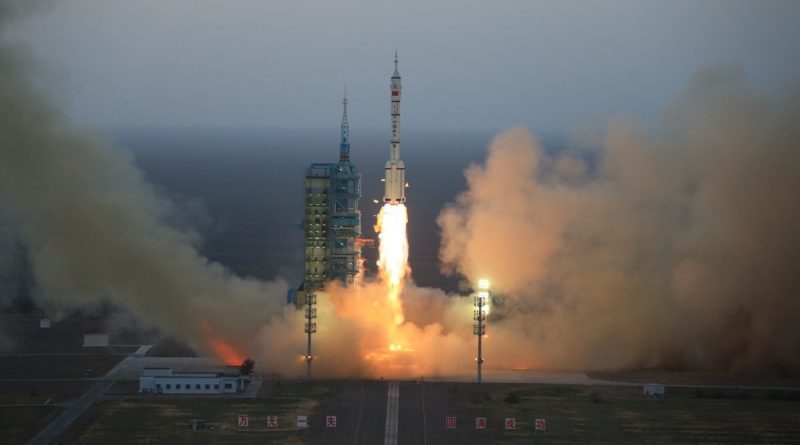 A Chinese Astronaut duo started their work week by strapping in aboard their Shenzhou 11 spacecraft and blasting off atop a Long March 2F rocket to embark on China’s most ambitious crewed space mission to date.

The crew’s two-day commute to the Tiangong-2 space laboratory will be followed by a month-long stay for extensive science operations in a flight that will more than double China’s previous endurance record of two weeks.

Shenzhou-11 made an on-time liftoff at dawn on the trusted CZ-2F rocket at 23:30 UTC on Sunday, 7:30 a.m. local time on Monday, embarking on a ten-minute ride into Low Earth Orbit.


Thundering off from the Jiuquan Satellite Launch Center in the Gobi Desert with a launch thrust of 604 metric tons, the 58-meter tall Long March 2F rocket quickly swung to the south east to fly across the Chinese mainland before heading out over the Pacific Ocean to begin the pursuit of the Tiangong-2 space lab.

Long March 2F dropped its four liquid-fueled boosters two and a half minutes into the flight followed seconds later by the hypergolic first stage, handing off to the second stage to operate for seven minutes and provide the final push into a Low Earth Orbit. Receiving a smooth ride, the two crew members seated in the Entry Module of the spacecraft, closely watched over data as their Shenzhou spacecraft separated nine minutes and 36 seconds after liftoff and completed the critical deployment of its power-generating solar arrays.

The crewmen are set for a two-day link-up with Tiangong-2 that awaits the arrival of its first visitor 385 Kilometers above the Earth – requiring Shenzhou-11 to raise its orbit in a methodical fashion before arriving in Tiangong’s vicinity on Tuesday for what is expected to be an automated docking around 19:40 UTC.

Shenzhou-11 is the first crewed space mission conducted by the Chinese in over three years, building upon a pair of visits to Tiangong-1, China’s first miniature space station lifted into orbit in 2011 to act as docking target and offer resources for a pair of two-week missions. Shenzhou-8, an unmanned mission, demonstrated autonomous dockings with the space lab before the SZ-9 and 10 missions assessed the habitability of the small module and performed a number of scientific studies.

After the success of Tiangong-1, the launch of the second ‘Heavenly Palace’ was pushed by two and a half years to enable it to be redesigned based on lessons learned from Tiangong-1 and permit a more advanced mission to be carried out. As such, Tiangong-2 marks the final stepping stone on a path to a large modular Space Station China plans to deploy before the end of the decade.

Tiangong-2 will satisfy three major objectives: a) the demonstration of a medium-duration mission with a crew performing regular science experiments aboard the laboratory, b) the validation of technology for cargo delivery and in-space propellant transfer, and c) the use of Tiangong-2 as a long-duration testbed featuring Earth and Space science payloads.

Arriving aboard Tiangong-2 on Tuesday, Jing and Chen will be the first Chinese Astronauts to enter a work routine in space with a 30-day stay aboard the space station module. They will be required to work eight-hour days, six days a week plus daily training sessions on a treadmill and bicycle ergometer.

While appearing identical to the Tiangong-1 lab – 10.4 meters in length, 3.35m in diameter and comprised of a Service and Orbital Module, Tiangong-2 features a number of changes under the hood to improve the overall performance of the 8,600-Kilogram miniature space station.

Lessons learned from the Tiangong-1 mission were implemented to make the crew environment more comfortable including considerations for easier crew movements inside the cabin as well as a sound and light system that can be tuned to the crew’s sleep-wake-cycle.

Tiangong-2 also hosts a new wideband communications system that allows for multiple channels of video and voice to connect the crew to Mission Control, their families and entertainment products that can be uplinked from the ground. A Bluetooth-based system allows the crew to work with wireless communications terminals throughout the Tiangong-Shenzhou complex that will measure 19 meters in length once joined.

Tiangong-2 combines external and internal payloads to allow the craft to be useful even when no crew is on board. Autonomous payloads on the space lab include the POLAR gamma-ray detector that studies gamma-ray bursts from deep space, a fountain atomic clock that is more accurate that current space-based systems, and an Earth-science payload comprising a microwave altimeter for Earth surface and ocean monitoring, a wide-field imager for ocean and land surveys as well as a multispectral spectrometer for atmospheric science.

Also pointed at Earth is a Quantum Communications System, further cementing China’s commitment to the exploration of this novel communications technology that offers the prospects of ultra-secure communications on Earth and in space.

Tiangong-2 also hosts a small satellite, Banxing-2, weighing in at 40 Kilograms and outfitted with a series of high-resolution and wide-angle cameras plus an ammonia propulsion system that will enable the small craft to remain at constant distance to Tiangong-2 and document the arrival of the Shenzhou-11 spacecraft on Tuesday.

The countdown for Sunday night’s launch started three days beforehand with final acceptance testing of the Shenzhou-11 capsule and Long March 2F rocket to ensure all was ready for the flight. Propellant loading began at 18:30 UTC on Saturday to fill the boosters, core stage and second stage with a total of 411 metric tons of toxic Unsymmetrical Dimethylhydrazine and Nitrogen Tetroxide.

For the crew members who were revealed to the public just a day before launch, the final countdown started at midnight, local time. They headed into suit-up operations five hours ahead of launch before participating in a send-off ceremony, also reporting to military leadership at the Jiuquan launch site.

The crew chosen for Shenzhou-11 consists of a veteran commander and rookie Flight Engineer.

Jing Haipeng, 50, is making his third mission to space after flying on Shenzhou-7 in 2008 – a mission that saw China’s first walk in space – and Shenzhou-9 in 2012 that accomplished China’s first crewed docking. Chen Dong, 38, is a former military pilot – as are all his male astronaut colleagues – and was selected in 2010. He is the first of the five male crew members selected in 2010 to take flight and is trained to back up Jing in all phases of the mission.

The crew duo waved good bye and boarded their bus just inside T-3 hours, being transported over to the Pad 921 complex in a pompous ceremony with hundreds of spectators lining the streets and a cinematography reminiscent of a high-profile parade, covering the entire 20-minute trip to the launch pad.

After the glamorous ceremonies and send-offs, the crew quickly shifted focus upon arriving at the pad’s Service Structure to deal with the mission at hand, boarding the elevator to the white room from where they boarded their Shenzhou. Resembling the three-module design of the Russian Soyuz, Shenzhou is slightly larger and features a number of modified systems but retains the basic mission scheme.

Chen Dong first ingressed the spacecraft and completed a quick inventory of equipment in the Entry Module before the mission’s commander Jing Haipeng climbed into the Orbital Module and down into the center seat of the Entry Module. After closing the Entry Module hatch, the astronauts strapped themselves in, completed a leak check on their suits and headed into a 90-minute launch checklist to assist the Beijing Mission Control Center with testing and reconfiguration activities.

Teams closed out the Orbital Module above the crew and sealed the spacecraft for a leak check before also buttoning up the protective payload fairing and setting up to depart the launch pad. The Long March 2F was revealed at T-45 minutes when the retraction of the Service Platforms started.

Shenzhou-11 powered up its launch abort system at T-30 minutes and the terminal phase of the countdown kicked in at T-15 minutes to put the spacecraft through the transition to internal power. A final status check at T-4 minutes revealed all Stations were GO for Launch, permitting Long March 2F to also switch to internal power and pressurize its tanks before being handed full control of the last steps of the countdown.

Preparing for their Monday morning commute to orbit, the crew closed their helmets and saluted their teams on the ground while the last seconds were counted down in Chinese.

When clocks hit zero, Long March 2F fired up its boosters and core stage, accompanied by the typical cloud of toxic propellant gas. Liftoff was confirmed at precisely 23:30:31.409 UTC and Long March 2F rose from its launch pad for a short vertical ascent before pitching and rolling onto a south-easterly flight path.

Burning 1,750 Kilograms of hypergolics per second, Long March 2F accelerated beyond the speed of sound 62 seconds into the flight followed by Maximum Dynamic Pressure at T+75 seconds. Commentary from the Chinese Mission Control Center in Beijing continued reporting good radar tracking of the vehicle and the crew reported everything was in order aboard the spacecraft.

The Launch Escape Tower was jettisoned at T+2 minutes and one second, firing dedicated separation motors to pull away from the ascending rocket that then switched to mid-altitude abort mode.

The four boosters, each 15.3 meters long and 2.25m in diameter, shut down their 740kN YF-20B engines two and a half minutes into the flight after burning nearly 38 metric tons of propellants.

Separation of the boosters occurred as planned at T+2:35 and the core stage made a quick stabilization maneuver before shutting down its four-engine cluster after burning over 170 metric tons of propellant.

Handing off to the second stage at T+2 minutes and 41 seconds, the 28.5-meter long core made a clean separation, enabling the upper stage to ignite its YF-22B main engine and YF-23 steering vernier to lift the 8,100-Kilogram Shenzhou spacecraft into orbit with a total thrust of 80 metric ton force.

Payload fairing jettison came three minutes and 30 seconds after liftoff when the spacecraft had ascended to an altitude over 100 Kilometers where aerodynamic forces are no longer a concern. Splitting open the two ten-meter fairing halves, Long March 2F shed no longer needed weight and gave Chen Dong his first view of Earth and its thin atmosphere out of the small Entry Module window.

The second stage shut down its main engine after a burn of exactly five minutes while the four-chamber vernier continued to fire for another 114 seconds to finish the orbital insertion with high precision, delivering a lower thrust of 4,800 Kilogram-force. Shenzhou-11 was aiming for an insertion orbit of 200 by 330 Kilometers, inclined 42.8 degrees and Long March 2F hosts an improved navigation system to realize very accurate injections as required by rendezvous missions.

Three minutes after separation, Shenzhou-11 unlocked and deployed its two power-generating solar arrays, marking the completion of a seemingly successful launch. Flying out over the Pacific Ocean, the crew was given a GO to open their helmets and configure their spacecraft for orbital flight – a task that will take up their first flight day.

The astronaut duo will oversee a pair of orbital maneuvers on Monday to begin the spacecraft’s link-up with Tiangong-2 that was last tracked in an orbit of 379 by 389 Kilometers. Shenzhou-11 will arrive at its destination in space around 19:40 UTC on Tuesday to advance China’s human spaceflight record and build the path to a large orbital station opening for business in the coming years.