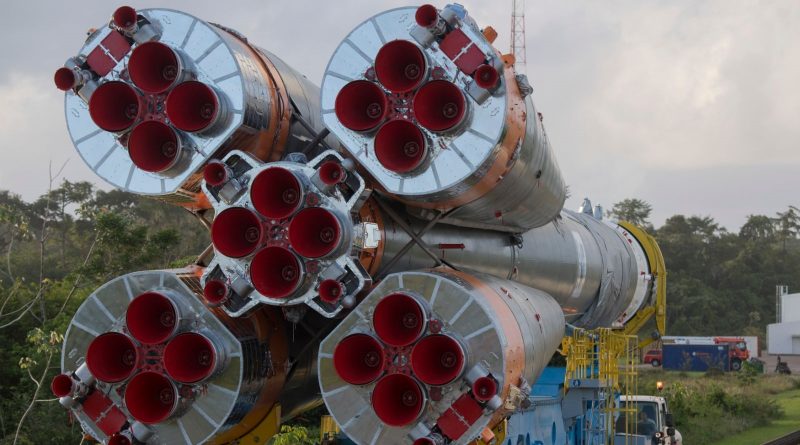 A Russian-built Soyuz rocket is counting down to liftoff from its equatorial launch pad at the Guiana Space Center Friday night on the rocket’s first-ever Geostationary Transfer Orbit mission from French Guiana. Maxing out the rocket’s payload capacity is the Hispasat 36W-1 communications satellite that moved to the Russian workhorse launcher in late 2016 to avoid a long wait for a slot on the Ariane 5.

Friday night’s liftoff is planned at the precise time of 1:03:34 UTC, kicking off a half-hour climb into a highly elliptical orbit. The three lower stages of the Soyuz will be in action for nine and a half minutes before the Fregat upper stage takes over for an exceptionally long burn to lift the satellite to its target orbit, peaking at 35,700 Kilometers in altitude.

The mission is widely watched across the Space Industry as it marks the first flight of a Russian-built rocket after revelations of widespread, systemic problems in Russia’s space sector with engine manufacturer VMZ coming under fire for delivering failure-prone engines after switching to cheaper metal alloys.


VMZ, manufacturer of the Soyuz upper stage engine and Proton’s 2nd & 3rd stage engines, is facing a major recall of engine units after persistent problems were uncovered during ground testing of the engines and the December 1st failure of a Soyuz rocket lifting the Progress MS-04 cargo spacecraft.

Press reports claim VMZ made an unauthorized switch of metal alloys on engines used by the Proton rocket, employing cheaper and less heat-resistant metals for the engines. Manufacturing issues were also identified as a potential cause of the failure of the RD-0110 engine on the Soyuz rocket carrying Progress MS-04.

Friday night’s mission employs a Soyuz ST-B rocket that uses an upgraded Block I third stage with RD-0124 engine which is a very distant relative to the older RD-0110 and has been cleared for flight. It is hoped that the mission will begin the process of re-building confidence in Russia’s launch vehicles as corrective measures are going into motion to rectify manufacturing and quality control issues.

Friday’s launch is the year-opening mission for Arianespace with a busy manifest lined up for 2017 using the company’s three launchers, the light-weight Vega, Ariane 5 as the heavy lifter and Russia’s Soyuz workhorse. Soyuz is set for its 16th launch from French Guiana, the first to head to a Geostationary Transfer Orbit after all previous missions either aimed for Sun Synchronous & Medium Earth Orbits or escape trajectories.

Enshrouded in the protective payload fairing of the rocket is the 3,220-Kilogram Hispasat 36W-1 satellite, debuting a new all-European satellite platform known as SmallGEO that was developed by OHB Systems with financial support from ESA to gain a foothold on the commercial market for small geostationary satellite platforms.

Employing a highly modular design, the platform is baselined for communications payloads but can be adapted to facilitate Earth Observation instruments as will be the case for the third generation of Europe’s Meteosat weather satellites that will employ the SmallGEO EO modification.

Spanish telecommunications provider Hispasat signed on to the program in 2008 to purchase the first SmallGEO spacecraft to become part of the company’s satellite fleet that currently carries over 1,250 TV and radio channels and delivers broadband and media services in Latin America and Europe. Hispasat 36W-1 is equipped with 20 Ku-Band transponders and three Ka-Band transponders deliver additional performance to be used to provide cellular backhaul, media distribution and broadband networking across the Iberian Peninsula, the Canary Islands and South America.

Additionally, Hispasat 36W-1 hosts an innovative payload known as RedSAT, pairing an Electronically Steerable Antenna with a state-of-the-art processor to enable a more agile and efficient use of power and increase the transmission capacity via active reconfiguration of communication beams. RedSAT will be used for highly flexible multimedia and broadband Internet to support Hispasat’s core services.

Hispasat 36W-1 was moved to Soyuz from a slot on Arianespace’s larger Ariane 5 rocket in late 2016 to avoid a long delay in finding a flight opportunity atop the Ariane 5 which typically pairs one satellite in the 6-metric ton weight class with a 3-ton satellite that rides in the rocket’s lower payload berth. Another geostationary communications satellite, SES 15, was also placed on a Soyuz mission, targeting launch in April to decompress Ariane’s flight manifest.

Named VS16 in Arianespace’s numbering system, Friday’s mission will require a total payload performance of 3,343 Kilograms (Hispasat 36W-1 & associated payload adapter equipment). VS16 is on the very upper edge of the achievable GTO performance by the upgraded Soyuz ST-B and Fregat-MT upper stage, taking into account the performance advantage of launching close to the equator.

Heading into an eight-hour countdown sequence, Soyuz will go through a series of pre-launch checkouts and engineers will put in place batteries and remove protective covers from the rocket to get ready for tanking. A go-ahead from the Russian State Commission is expected around five hours ahead of the day’s T-0 time with propellant loading operations starting at the L-4 hour mark to load the four boosters, core stage and third stage with 272 metric tons of Liquid Oxygen and Kerosene. In addition, the Soyuz receives Nitrogen and Helium to act as tank pressurization gas while the boosters & core also receive highly reactive Hydrogen Peroxide to drive the engine turbopumps.

Standing fully-fueled, the 46-meter tall Soyuz will be revealed atop is launch pad with one hour to go in the countdown when the Service Gantry will be moved to its launch position. Hispasat will move to internal power around 20 minutes before launch and a final check at L-10 minutes will give clearance for the Automated Countdown Sequence.

Liftoff is set for precisely 1:03:34 UTC on Saturday with a second instantaneous T-0 target available at 01:36:34 UTC should the first target be missed for whatever reason.

Thundering off with a total thrust of 422 metric ton-force, Soyuz will ascend vertically for only a few seconds before pitching and rolling onto a due easterly departure – similar to that taken by Ariane 5 on its GTO deployments, allowing the same ground stations to be activated for Friday night’s mission.

Burning 1,600 Kilograms of propellant per second, Soyuz will quickly pass the speed of sound and encounter Maximum Dynamic Pressure as it makes its way out of the atmosphere. The four boosters will shut down their RD-107A engines at T+118 seconds after each burned 39,200kg of propellant to help Soyuz accelerate to a speed close to two Kilometers per second. Swinging outward, the 19.6-meter long boosters will drop away from the core stage that will continue firing its RD-108A engines at full throttle, pushing Soyuz into space with a thrust of 102 metric ton-force.

Three minutes and 33 seconds into the mission, Soyuz will split open and separate its fairing halves, revealing the Hispasat spacecraft for the rest of its high-speed journey. After burning 91 metric tons of propellant, RD-108A will shut down four minutes and 45 seconds into the mission followed two seconds later by the ignition of the Block I upper stage and the pyrotechnic separation of the 27.8-meter core stage.

Soaring to a thrust of 30 metric ton-force, the RD-0124 engine will be in action for four and a half minutes, in the process burning 25,400 Kilograms of Oxygen and Kerosene. RD-0124 is an upgrade to the RD-0110 used on the upper stage of the Soyuz 2-1A and the older variants, switching from an open to a closed cycle to increase the engine’s performance in terms of specific impulse.

The 9.5-minute propulsive phase of the lower Soyuz stages is aiming for a sub-orbital arc with a high point at 201 Kilometers. Fregat will separate from the Block I third stage at T+9:23 and coast for one minute during which the upper stage rotates to the correct orientation and conditions its propellants for a clean engine ignition.

Fregat-MT is 3.35 meters in diameter and 1.5 meters long capable of holding 7,100 Kilograms of Unsymmetrical Dímethylhydrazine fuel and Nitrogen Tetroxide oxidizer. Fregat is an autonomous Upper Stage that is equipped with its own power, propulsion and control system to perform flights of up to 48 hours and multiple engine firings.

Friday’s primary mission will be realized with a single burn of the Fregat, igniting the 2,000 Kilogram-force S5.92 engine at T+10 minutes and 23 seconds and firing for 17 minutes and 37 seconds to directly lift the satellite into Geostationary Transfer Orbit.

The mission is aiming for an orbit of 250 by 35,736 Kilometers, inclined 5.44 degrees with payload separation planned at T+32 minutes and 10 seconds. From its highly elliptical transfer orbit, Hispasat 36W-1 will take several days to boost itself into Geostationary Orbit, taking a slot at 36 degrees West over the Atlantic Ocean.

For Fregat, the mission will end with a brief retrograde burn, performed while ascending toward its first apogee in order to maneuver the stage into a sub-GTO orbit of 190 x 35,600 Kilometers where it does not interfere with satellites in the GEO Belt and descends toward atmospheric entry relatively fast given the lowered perigee altitude.