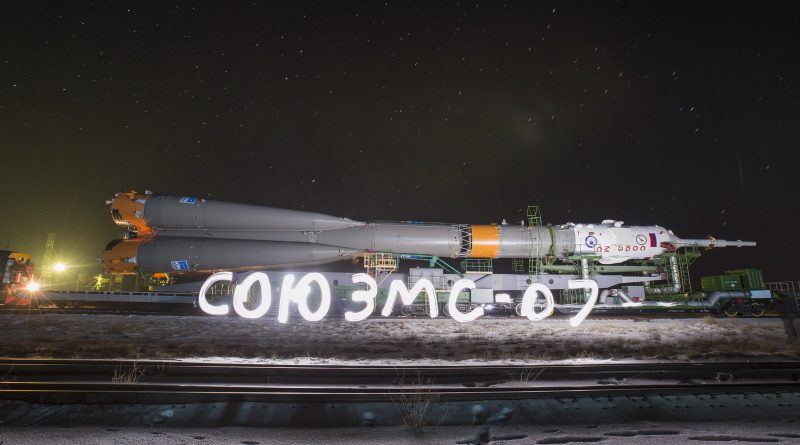 Russia’s Soyuz FG rocket was welcomed by freezing temperatures and a star-filled sky Friday morning when emerging from its MIK assembly building for the rollout to Site 1/5 at the Baikonur Cosmodrome for liftoff on Sunday with three crewmen from Russia, Japan and the U.S. The 49.5-meter long rocket began its rollout at the traditional early morning hour, dating back to the rollout of Yuri Gagarin’s launch vehicle back in 1961.

After a slow train ride, Soyuz FG took its vertical launch position atop the Site 1/5 pad, the very same pad used by Gagarin. Over the next day, Soyuz will undergo detailed checkouts before pressing into countdown operations. Friday’s rollout was attended by Soyuz MS-07 backup crew members Sergei Prokopyev, Alexander Gerst and Jeanette Epps; the three prime crew members did not attend the rollout but had a chance to visit with their Soyuz FG rocket earlier in the week as part of their final inspection of the Soyuz MS-07 spacecraft.

Preparations are continuing on track toward liftoff at 7:21:00 UTC on Sunday when Soyuz will begin its nine-minute climb to send the 7,200-Kilogram spacecraft into Low Earth Orbit. Third-time Soyuz Commander Anton Shkaplerov, physician-astronaut Norishige Kanai and former navy test pilot Scott Tingle will stick to the longer, two-day flight profile – inbound for an automated docking on Tuesday at 8:43 UTC.

All Photos below: NASA / Joel Kowsky

All Photos below: Roscosmos / Tsenki