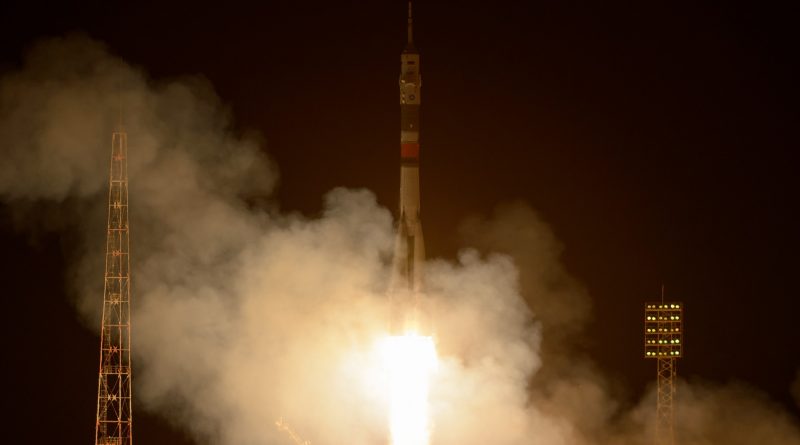 Three crew members from Russia, France, and the U.S. departed Earth Thursday night to head off on a half-year mission living and working aboard the International Space Station to participate in world-class science and outfitting of the Station for continued operations into the next decade.

Veteran Soyuz Commander Oleg Novitskiy, NASA’s most experienced female astronaut Peggy Whitson and ESA’s Thomas Pesquet took their seats atop 274 metric tons of highly energetic propellants in anticipation of a nighttime liftoff from Baikonur’s historic Site 1/5. The trusted Soyuz came to life when the four boosters and large core stage spun up their pumps and ignited their engines to achieve a collective liftoff thrust of 422 metric tons to lift the 49.5-meter tall rocket from its pad.

Lighting up the night skies over a cold Baikonur Cosmodrome, Soyuz lifted off at 20:20:13 UTC, 2.20 in the morning local time, and pitched to the north-east to drop the 7,200 Kilogram Soyuz MS-03 spacecraft off in the orbital plane of the International Space Station for a two-day chase.

The the two veterans and single space rookie strapped into the cozy Entry Module of the the segmented spacecraft were able to enjoy a smooth nine-minute ride as Soyuz FG checked off its 58th successful mission.


Soyuz MS-03 – the third in the new MS series with improved systems – is taking the scenic route to the Space Station, sticking to the conventional 34-orbit rendezvous profile. The trio will oversee a pair of engine burns Thursday night ahead of a quiet day on Friday with only a single small orbit adjustment to set the stage for Saturday’s rendezvous. Soyuz is set for a fully automated docking at 22:01 UTC to mark the start of a 178-day stay until May.

Aboard the International Space Station, the three crew members will join the resident crew of Shane Kimbrough, Sergei Ryzhikov and Andrei Borisenko for what is shaping up to be a very busy mission. Before the end of the year, Expedition 50 will welcome two cargo vehicles launching from Kazakhstan and Japan and then press into preparations for at least two spacewalks for the replacement of the Space Station’s batteries out on the truss structure.

The majority of the crew’s time will be dedicated to scientific experiments with over 200 studies in progress during their tenure. For many of them, the crew members themselves will act as test subjects to learn about the effects of the space environment on different bodily systems – knowledge that is required to achieve longer and longer mission durations through the implementation of improved countermeasures preventing the negative effects of space radiation and microgravity-induced bone & muscle loss.

Thursday night’s launch comes in a busy period at the Baikonur Cosmodrome with just four weeks between the previous and this crewed mission as the result of the delay to the MS-02 mission that slipped from September to October 19. However, human spaceflight operations at the storied launch base are a well oiled machine after over five decades of launching crews into space aboard the R7-derived launch vehicle fleet.

Soyuz MS-03 – flying under the call sign Kazbek named after the Caucasus mountain – is commanded by Oleg Novitskiy, a second-time Soyuz spacecraft commander. He comes from a military background, serving in the Russian Air Force before being selected for the Cosmonaut program in 2006 and heading up the crew of Soyuz TMA-06M that launched to the Station in 2012. On his first flight, Novitskiy logged 143 days in space,

The Soyuz ‘left-seater’ – considered the co-pilot position – is Thomas Pesquet, a European Space Agency Astronaut of French nationality who is the last of the 2009 ESA astronaut crew to fly to space. He is a trained aerospace engineer and also worked as an airline pilot before being selected for the program.

The most experienced crew member aboard Soyuz is Peggy Whitson who can look back at a two-decade career as part of NASA’s Astronaut Corps. Selected in 1996, Whitson flew to the Space Station in 2002 when the complex was still in its infancy and again in 2007/08 when ISS had grown quite considerably but was still far from being complete. On these two flights, Whitson used the Space Shuttle and Soyuz as crew ferry and logged 376 days in orbit, also performing six spacewalks for a total of nearly 40 hours.

The crew’s long launch day started around nine hours ahead of liftoff with a typical routine of, showering, having breakfast at the Cosmonaut Hotel and receiving the traditional pre-flight blessing before departing the hotel. At Site 254 of the Cosmodrome, the three crew members put on their Sokol Launch and Entry Suits and also had a final face-to-face conversation with friends and family before departing for the launch pad at Site 1/5, the very same pad Yuri Gagarin blasted off from in 1961.

Out at the pad, Soyuz FG entered its countdown at T-8 hours with several hours of testing and fueling preparations. The green light for propellant loading was given by the Russian State Commission after a final review of launch vehicle status and teams put in motion the lengthy tanking procedure at the T-5-hour point. Over the course of the next two hours, Soyuz FG received 274 metric tons of Liquid Oxygen and Kerosene propellants plus Liquid Nitrogen tank pressurant while teams also loaded the boosters and core stage with Hydrogen Peroxide to drive the engine pumps.

Arriving at the pad at T-2.5 hours, the three crew members marveled at their Soyuz rocket, standing tall in sub-zero temperatures before waving good-bye and boarding the Soyuz capsule, taking their seats to put the spacecraft through final checkouts and reconfigurations. Soyuz was revealed 40 minutes ahead of liftoff when the Service Structure halves opened up and retracted to their launch position, clearing the way for the 305-metric ton rocket.

Soyuz MS-03 was placed on battery power and the final roll-call by all by all launch team members gave the GO for the Automated Countdown Sequence, picking up six minutes prior to the planned launch time. As relic of the ICBM heritage of Soyuz, the launch key was inserted to authorize the firing of the rocket after completing its final setup steps, notably the pressurization of tanks, the transition to onboard control and the purge of the engines to ensure a clean ignition.

With one minute to go, Soyuz switched to battery power and was handed control over all countdown events. The Block I Upper Stage Umbilical popped off and its mast retracted followed by the launch command at T-20 seconds that initiated the spin-up of turbopumps and ignition of the RD-107A and RD-108A four-chamber engines on the boosters and core.

Flames erupted from the base of the rocket as the engines soared to a collective liftoff thrust of 422 metric-ton force, blasting off when overcoming counterweights.

Soyuz left the ground at the precise time of 20:20:13:099 UTC, rising vertically into the dark skies over the historic site at the Cosmodrome that has seen over 500 launches.

With over 1,800 missions under its belt over a career of five decades, Soyuz is unmatched in the world of rocketry both in terms of flight heritage and reliability, flying more missions over a year than any other rocket type. Built on the R7 design envisioned by Sergei Korolev, Soyuz can support crewed missions, cargo flights and satellite launches to all types of orbits.

Quickly ascending into a clear night, Soyuz pitched over to start heading north-east toward the Russian border – the standard departure route for crews lifting off from Baikonur. Consuming 1,600 kg of propellant every second of powered flight, Soyuz pushed through the sound barrier and encountered Maximum Dynamic Pressure one minute after liftoff.

The jettisoning of the Launch Escape Tower at T+1 minute and 54 seconds into the flight was quickly followed by the separation of the four boosters after they helped accelerate the Soyuz to a speed of 1.5 Kilometers per second. Swinging outward and away from the still-firing core stage, the four 19.6-meter long boosters showed what is known as the Korolev Cross – only visible for a split second in a clear night when spent boosters rotate away from the rocket.

With the boosters headed for impact 350 Kilometers from the launch pad, Soyuz continued speeding towards orbit under the power of its core stage, generating a vacuum thrust of 102 metric ton force. Two minutes and 36 seconds into the mission, Soyuz separated the launch shroud to shed no-longer-needed weight as the vehicle had been over 80 Kilometers in altitude by that point where aerodynamic forces can no longer damage the Soyuz spacecraft.

Flying toward their first sunrise in space, the three crew members quickly felt the raw force of rocket power as the core continued to fire at full thrust as it got lighter and lighter, peaking at a force of nearly 4Gs just before cutoff. Onboard cameras showed the crew members being thrown forward when the acceleration from the core stage stopped four minutes and 45 seconds into the flight – one of the most dynamic ascent events for the crew.

Split seconds later, the RD-0110 engine of the third stage was commanded to fire and cutting charges separated the 27.8-meter long core that had done its job – sending Soyuz to an altitude of 140 Kilometers, going 3.7 Kilometers per second at staging.

Block I and its four-chamber engine were tasked with the final push to send the Soyuz into orbit, accelerating the stack by another four Kilometers per second to reach orbital velocity.

The Launch Bunker continued to give nominal calls throughout the burn of the 30,400 Kilogram-force engine and onboard views of the Soyuz again showed the familiar jolt at T+8 minutes and 45 seconds when the acceleration of launch suddenly faded into the sensation of Zero-Gravity for the crew and their Zero-G mascot – a three-faced puppet representing each of the MS-03 crew members.

Separation of the Soyuz spacecraft was confirmed three seconds after engine cutoff and only a few seconds later, the spacecraft executed time-tagged commands and deployed its solar arrays and navigation antennas. With this major step out the way, the crew was quick in commanding the Flight Control System through a test sequence because the ground station pass after injection was shorter than normal for this mission due to tracking station availability.

Heading off on their first orbit of Earth, the crew was to open their helmets and complete a series of checkouts before regaining communications with Mission Control either through the Luch Data Relay Satellites or the next ground station pass.

A pair of engine burns is planned for the third and fourth orbit of the mission to lift the Soyuz from the initial orbit of 200 by 245 Kilometers into an orbit of 310 by 337 Kilometers to set up for the initiation of the rendezvous on Saturday.

The MS-03 mission has to stick to the longer two-day profile because the ground segment is not yet ready to support an expedited six-hour rendezvous which will require a ground station compatible with the Unified Command and Control System of the Soyuz MS to deliver updated flight parameters right after orbital insertion. This ground station, located near the Vostochny Cosmodrome in Russia’s far east, will be tested on this flight to ensure data can be exchanged through the S-Band link before counting on the data connection for the next mission that is currently expected to use the fast four-orbit profile.

Settling in aboard their Soyuz and going to sleep on their sixth lap around ISS, the trio can look forward to a quiet day on Friday dedicated to a manual attitude control test using a subset of the spacecraft’s thrusters as well as a small orbital correction. Soyuz is expected on the Station’s doorstep in the evening hours on Saturday, making an automated approach to dock with the Rassvet module at 22:01 UTC to top up the Expedition 50 crew.