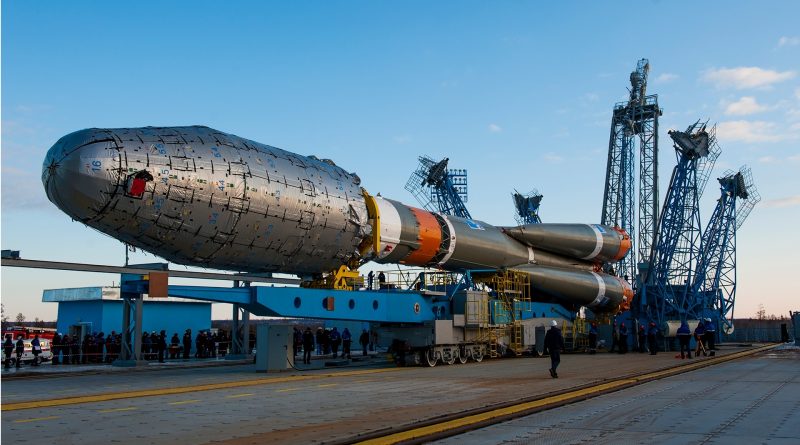 Russia’s Soyuz launch vehicle rolled out to its launch pad at the new Vostochny Cosmodrome for the first time last week to begin the process of checking the new facility that is set to support Soyuz missions as early as April.

As its name suggests, Vostochny, meaning ‘Eastern’ in Russian, is located in the Russian Far East, in the Armur region near the Chinese border. Vostochny was announced as Russia’s future launch site in 2007 and construction at the site started in 2011 and includes the establishment of support facilities for workers, access roads and railway lines, and launch pads for the Soyuz and Angara rockets. The rationale behind establishing the Cosmodrome was to reduce Russia’s dependency on the Baikonur Cosmodrome in Kazakhstan.

The new Cosmodrome, to be under civilian operation, is located 600 to 800 Kilometers from the Pacific Ocean, depending on the ascent trajectory. Vostochny’s location was chosen for its sparsely populated surroundings, connections to major transportation networks and safe rocket stage drop zones on land and further downrange in the Pacific Ocean. The location at 51 degrees north also ensures that the payload capability of Russia’s rockets would not change significantly when compared with launches from the Baikonur Cosmodrome – under lease to Russia from Kazakhstan at an annual cost of around $115 million.


The goal is to slowly shift missions from Baikonur to Vostochny over a period of years, however, Russia will continue to use Baikonur for at least another decade until the heavy-lift Proton rocket is retired and crewed missions can be transferred to Vostochny when the Federation spacecraft, currently in development, becomes operational for launch on the Angara A5P.

Over the course of construction at Vostochny, efforts were plagued by delays, unpaid wages for workers and alleged cases of corruption. An important political goal set early in the construction process was to complete the first launch from the new Cosmodrome by the end of 2015 and the race was underway to complete the work to establish the Soyuz launch pad, assembly facilities, propellant support facilities, ground support systems, management buildings, and other support buildings ahead of a detailed testing campaign. In October, the launch – initially promised for December 25, 2015 – was pushed into 2016.

The last concrete at the Soyuz launch pad was poured in November and outfitting of the pad with the various launch support systems made good progress towards the end of the year. Vostochny’s Soyuz pad makes use of a similar architecture as the Soyuz facility at the Guiana Space Center and lessons learned from the equatorial launch site were applied during the construction. Unlike the Soyuz pads in Plesetsk and Baikonur, Vostochny’s launch complex features a large moving Service Gantry that can roll over the launch vehicle to provide access platforms and retreat to a safe distance some time before liftoff.

The first Soyuz rocket, a 2-1A version with some modifications for the debut Vostochny launch, arrived on a 13-car train on September 24, 2015 and was moved to the shiny new assembly facility on October 9, but remained inside the shipping containers until early 2016 because the finishing touches had still to be made to the facility.

Assembly of the Soyuz rocket started on January 19 with the typical steps of attaching the four liquid-fueled boosters to the large Core Stage before the Block I third stage and payload stack are integrated. While Soyuz underwent assembly, a final set of autonomous tests of the launch pad and propellant systems was started to prepare for the first rollout of the Soyuz.

The satellites set to ride into orbit atop the Soyuz rocket were delivered to Vostochny in the second half of January. The mission will carry into orbit the Mikhailo Lomonosov satellite, named after the 18th century scientist and writer, weighing in at 450kg and outfitted with a number of instruments to measure gamma-rays, high-energy particles, and high-energy cosmic rays and Extensive Air Showers caused in Earth’s atmosphere.

AIST-2, riding next to Mikhailo Lomonosov, weighs 531 Kilograms and hosts a hyperspectral camera for Earth observations and a P-Band radar capable of studying underground structures. A third payload, SamSat-218/D, is a 3U CubeSat to study an aerodynamic stabilization system.

The Soyuz 2-1A rocket was wheeled from its processing facility to the launch pad on March 21 and lifted into its launch position. Later that day, the Mobile Service Tower rolled onto the pad to enclose the rocket with access platforms being put in place for fit checks. On March 22, the Soyuz rocket completed a series of telemetry checks and the fit of the umbilical arms to the individual stages was checked. Fueling tests commenced on the 23rd to practice Soyuz tanking operations and launch abort simulations were run the day after.

On Friday, the 46-meter tall Soyuz rocket was returned to the Processing Facility for final prelaunch checks and the integration of the three satellites atop the Volga upper stage. Roscosmos issued a press release declaring all tests were completed with nominal results.

The first launch from Vostochny could occur as early as April 25 if preparations proceed as planned.