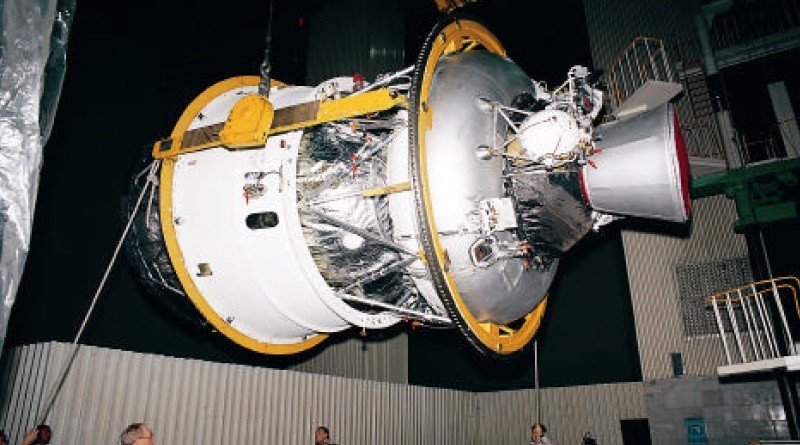 A Russian rocket motor suffered an explosive break-up on Wednesday, shedding at least 20 pieces of debris in a highly elliptical orbit around Earth. According the Joint Space Operations Center, the breakup of the Block DM-2 Ullage Motor launched back in December 2008 occurred around 9:20 to 9:30 UTC on Wednesday.

The Joint Space Operations Center issued a notification identifying the Block DM-2 Aux Motor #33473 as the parent object from which the debris originated. 20 pieces were tracked by 16 UTC on Wednesday and have been added to conjunction screenings for other satellites. “There is no indication this breakup was caused by a collision,” the JSpOC concludes in its statement.

The Block DM-2 Ullage Motor was last tracked in an orbit of 700 by 18,800 Kilometers at an inclination of 65.3 degrees. This data set was issued late on Tuesday, no post-event tracking data was available on Wednesday and Thursday.

The Block DM-2 upper stage was part of a Proton-M rocket launch on December 25, 2008 lifting a trio of Glonass-M navigation satellites into an orbit of 19,100 Kilometers.


After the three-stage Proton Rocket lifted the orbital unit into a Low Earth Parking Orbit, the Block DM-2 upper stage was tasked with firing twice – first to lift the stack into an elliptical parking orbit followed by a circularization maneuver at the working altitude of the Glonass constellation.

A pair of SOZ Ullage Motors were installed on the upper stage, delivering stabilization and propellant settling functions. Each SOZ assembly, with a dry mass of 56 Kilograms, was outfitted with five engines, two with a 22-Newton thrust for pitch and roll control, a pair of 44N yaw control thrusters and two 11N ullage thrusters. This design enabled the SOZ units to provide attitude control functions during coast phases in addition to their propellant settling function.

As part of a typical flight profile, the two SOZ units would remain attached to the Block-DM upper stage until after the final ignition of the main engine – separating when the main engine reached full thrust to eliminate no-longer needed mass.

In case of the 2008 launch, the SOZ modules were jettisoned after the RD-58M main engine re-started on its second burn to lift the stack from a 180 by 19,100 Kilometer transfer orbit into a circular orbit.

Typically, each SOZ still contained up to 40 Kilograms of Nitrogen Tetroxide and Unsymmetrical Dimethylhydrazine propellants when separating. These hypergolic propellants are corrosive and will eventually corrode tanks and propellant lines. If coming in contact, the propellant components ignite, making separated SOZ modules susceptible for spontaneously exploding after an extended period spent in orbit.

This was the 45th SOZ motor to explode.

The first SOZ motor exploded back in 1984 and an increasing number of such events led to a revision of the SOZ design to decrease the risk of explosion, though the date of when these changes were implemented is not known. The new Block DM-03 upper stage used on Proton and the Angara family does not employ detachable attitude control thruster units.

Typically, SOZ explosions generated upwards of 50 trackable debris with a significant spread in perigee and apogee altitudes given their high-energy departure from the parent object.

The other SOZ motor of the 2008-067 launch exploded on March 26, 2016 indicating that the two had similar lifetimes until component corrosion allowed their propellant components to mix.

With 20 fragments already detected within a period of hours, it appears likely that the SOZ breakup left dozens of small pieces in orbit, some too small to be tracked from the ground.