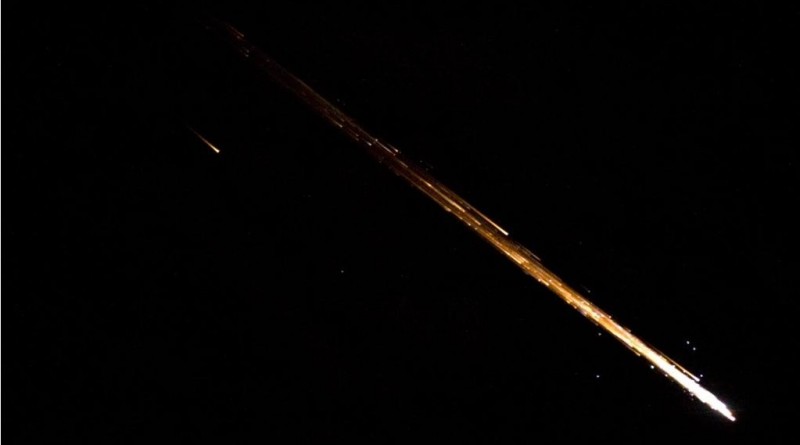 A very rare breed of unidentified space object in a suicidal orbit is approaching its fiery demise in two weeks when it will re-enter Earth’s atmosphere over the Indian Ocean. Designated WT1190F, the mystery object was tracked over the past three years in a highly elliptical orbit around Earth but could not be identified or tied to a past space mission – researchers only know with certainty that it is not an asteroid and it will enter the atmosphere on November 13.

WT1190F was first detected by the Catalina Sky Survey in February of 2013 – a project set up to discover Near Earth Objects, particularly comets and asteroids that could potentially come close to Earth and pose a threat of impact.


Given its highly elliptical orbit that takes the object to nearly twice the distance of the Moon at its farthest point, Earth-based observatories lost track of WT1190F, then known as UDA34A3, after a short period of time. It was again acquired by a Catalina observatory in November 2013, but data was not sufficient for an orbit calculation and WT1190F again drifted into the unknown.

Finally, on October 3, 2015, the object was recovered and its orbit was calculated to have a period of roughly three weeks. Knowing the trajectory of WT1190F, researchers went back to past observations and found it was actually detected in December 2012, but went unnoticed.

ESA’s Near-Earth Object Coordination Center was put on the case to study the object with various observation techniques. Astronomers were able to calculate the object’s density at around 0.1 grams per cubic centimeter and managed to constrain its size to a maximum of three meters. The low density of the object – about 10% of the density of water – obviously rules out the possibility of it being an asteroid and indicates that it most likely is a spent rocket stage – essentially an empty hull once used as propellant tank and an engine section on the aft end.

Because of its low density and the high speed of its re-entry, WT1190F will very likely burn up in its entirety, unless it contains any heavy & dense components for which there currently is no indication.

The mystery object approaches Earth in an orbit of approximately -650 by 601,000 Kilometers, inclined 13 degrees. With the trajectory data collected this month, ESA’s NEO Coordination Center calculated WT1190F will hit Earth’s atmosphere at 6:19 UTC on November 13 around 100 Kilometers off the southern coast of Sri Lanka.

What makes WT1190F a unique cosmic conundrum is the fact that the circumstances of its eventual demise are well known in advance – a rarity for artificial space objects – but its identity remains a mystery. Possible identities for the object range from rockets launched to the Moon in recent years to decades old hardware, possibly even reaching back to the days of Apollo.

There simply is no way of telling where the object originated. Its highly elliptical orbit means WT1190F is only weakly bound to Earth when at a great distance where it spends most of its time. Therefore, factors such as gravitational perturbations in the Earth-Moon system and solar pressure make it impossible to model a trajectory spanning more than a few orbits.

Lunar and planetary exploration conducted in the past decades left dozens of objects lingering in the Earth-Moon system, many of them moving through space unbeknownst to anyone on Earth. Even objects boosted into a solar orbit being recaptured within the Earth-Moon system is not unheard of, broadening the possible origins of WT1190F.

One of the possible candidates for WT1190F is particularly tantalizing to observers and space historians: Could it be Apollo 10’s Snoopy module flown to within 15 Kilometers of the Lunar surface in May of 1969 by Tom Stafford and Gene Cernan?

After having done its job of demonstrating the functionality of the Lunar Module, the descent and ascent stages, Snoopy was jettisoned and its ascent engine was fired for 4 minutes and 9 seconds to burn until the exhaustion of onboard fuel reserves, boosting its velocity by 1.4km/s and placing it in a solar orbit. All other Apollo ascent stages re-entered Earth’s atmosphere or ended up on the lunar surface, either being crashed intentionally or being left in orbit to ultimately impact the Moon due to its uneven gravitational field. The whereabouts of Snoopy have been unknown since it ran out of power in 1969 – a 2011 campaign to search for it never came to fruition.

It is possible that Snoopy was re-captured by the Earth-Moon system at some point and its dimensions of 3.8 by 4.3 by 4.0 meters and density of ~0.03g/cm³ may just fit the measurements of ESA, but there is no way of telling whether WT1190F is the long-lost Snoopy spacecraft. In fact, almost all rocket stages fit within the envelope given by ESA and will be close to the calculated density.

Other possibilities range from Saturn rocket upper stages, rocket bodies from early Lunar programs such as Ranger or Soviet projects, Chinese rockets launched towards the Moon in recent times, or rocket bodies coming back from missions to the L1/L2 Lagrange points.

Scientists are hoping to obtain spectral data of WT1190F to get some idea of its composition which could help in the identification process as seen in 2002 when the S-IVB rocket stage from the Apollo 12 mission was identified through the spectral signature of its paint.

An observation campaign is being coordinated to study the disintegration of the object from ships or airplanes to collect valuable data on re-entry dynamics. Furthermore, WT1190F puts to the test systems and plans in place for the detection of potentially dangerous space objects – a rare opportunity that is happily accepted by those watching out for objects on a collision course with Earth.

Another item of interest is the data presented by WT1190F with respect to modeling the effects of nongravitational forces on low-density objects and their trajectories for the improvement of future orbit modeling.

WT1190F’s fiery demise on November 13 will likely put on a show for observers in the area as the object – whatever it may turn out to be – slams into the dense atmosphere, heats up rapidly and disintegrates before the vast majority of its components are vaporized. Re-entry will transpire quite fast with WT1190F moving more swiftly than a satellite in orbit but slower than a typical meteor. Even though it will be day when WT1190F comes home, its streaking re-entry will be visible for several seconds.