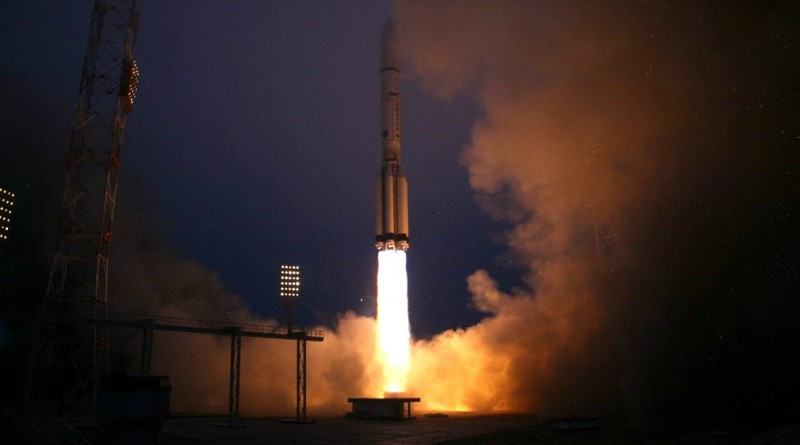 Update: The Russian Ministry of Defence confirmed the success of Sunday’s Proton-M launch with the second Garpun Military Satellite. Named Kosmos 2513, the satellite began communicating with the ground after separating from the carrier rocket.

A Proton-M rocket blasted off from Site 81/24 at the Baikonur Cosmodrome on Sunday at 0:19 UTC embarking on a classified mission to deliver the Garpun No. 2 military communications satellite to Geostationary Orbit in a mission lasting approximately nine hours. Tasked with the relay of data to and from low-orbiting satellites, the Garpun spacecraft will take up station in Geostationary Orbit, 36,000 Kilometers above Earth to enable the real time downlink of images and other data from Russia’s military satellite fleet including low-orbiting reconnaissance craft.

The launch of the heavy-lift Proton rocket was originally scheduled for December 10, but was pushed three days for additional reviews, reportedly associated with the spacecraft separation system following the separation failure of Russia’s Kanopus ST remote sensing / submarine-tracking satellite last week leading to an untimely demise of the satellite in an uncontrolled re-entry. This marked the second separation failure of the year after the botched launch of Progress M-27M in April that also hit trouble at the time of spacecraft separation, therefore it is understandable that teams decided to proceed with caution and conduct additional reviews.


As with the first Garpun launch in September 2011, virtually no information on the preparation for this mission or its satellite payload were published, nor was there a live launch broadcast – illustrating the secretive nature of this mission.

Countdown operations at the Baikonur Cosmodrome picked up in the evening hours, local time, on Saturday with the activation of the Briz-M upper stage 11 hours and 30 minutes ahead of the target T-0 for testing, battery charging and flight software load. Work at the launch pad was in full swing when the Proton-M rocket was powered up for its pre-launch checks and reconfigurations.

Propellant loading picked up around six hours prior to liftoff and over the course of a three-hour operation, the three stages of the 58-meter tall Proton rocket received approximately 622 metric tons of toxic hypergolic propellants.

Standing ready for liftoff, Proton was revealed one hour before launch when the protective Service Structure was moved to its launch position. Heading into the final minutes of the countdown, the satellite was switched to internal power followed a little later by the Briz-M upper stage and Proton-M rocket which also pressurized its tanks and started up its onboard launch sequencer to control the final events leading up to ignition including a series of self-checks of the rocket.

Soaring to a total liftoff thrust of 1,014 metric ton-force, Proton’s six RD-275M engines lifted the rocket off the pad at 0:19 UTC, 6:19 a.m. local time on Sunday. Proton ascended vertically for a few seconds before pitching and rolling onto the usual departure path out of Baikonur, headed to the north east towards a 51.5-degree orbit.

Proton’s first stage, measuring 21.2 meters in length and 7.4 meters in diameter with the characteristic external tanks clustered around the core, consumed 3,600 Kilograms of propellant per second, firing for one minute and 59 seconds. The stage was tasked with a hot-staging sequence that involved the second stage commanding its engines to ignite followed split seconds later by the pyrotechnic separation of the spent booster to fall back to Earth.

14.5 meters in length and 4.15 meters in diameter, the second stage was to fire up its three RD-0210 and one RD-0211 engine to achieve a total thrust of 245 metric ton-force over the course of a burn of three minutes and 28 seconds. The staging sequence between the second and third stage was also expected to use a hot-staging technique, igniting the four-chamber vernier engine of the third stage three seconds ahead of separation so that the stage could pull away from the second stage before commanding its RD-0213 main engine to ignite. Coming to life, Proton’s third stage was to burn four minutes with a total thrust of 60 metric-ton force.

While the third stage was in operation, Proton was to jettison its protective payload fairing. The third stage is 6.5 meters long and uses the four-chamber vernier for steering and to optimize the injection, firing for another ten seconds after main engine shutdown at T+9:31.

Nine minutes and 42 seconds into the flight, Proton was to send the Briz-M upper stage on its way, starting out in a sub-orbital trajectory. From there, the Briz-M stage was to set out on a direct insertion mission to Geostationary Orbit taking nine hours and requiring the stage to conduct four main engine burns, separated by coast phases of varying duration.

Briz-M carries nearly 20,000 Kilograms of hypergolic propellants for consumption by an S5.98 main engine that delivers two metric tons of thrust and can be re-started multiple times to enable the rocket stage to put its payloads into a variety of orbits. The stage also sports attitude control and settling thrusters that control its orientation in space and manage the propellants within the tanks.

The first burn, expected to start around 11 minutes into the flight, aims to boost the stack into a Low Earth Parking Orbit at an altitude around 180 Kilometers for the first coast phase.

Using the conventional mission profile, Briz-M would then coast for a little less than an hour so that its 19-minute second burn centers the ascending node of the orbit, raising the apogee to approximately 5,000 Kilometers, positioned above the equator. Due to its limited performance, Briz-M needs two burns to complete the apogee-raising. Therefore, the third burn again occurs around the perigee of the orbit and lasts around 18 minutes, raising the apogee to geostationary altitude. Following the third burn, Briz-M would separate its Auxiliary Propellant Tank and settle down for a long coast phase, climbing all the way up to apogee.

Reaching the high-point of its elliptical transfer orbit, Briz-M would re-start its S5.98 engine some time around eight and a half hours into the flight, burning the engine out of plane to accomplish the circularization of the orbit while also reducing the inclination to close to zero. Spacecraft separation would occur around the nine-hour mark into the flight followed by a pair of maneuvers by Briz-M to enter a graveyard orbit.

A confirmation of the successful insertion of the satellite, to receive a Kosmos designation, will be coming through Russian media outlets in the pre-noon hours UTC on Sunday. Tracking data for the satellite that will reveal its injection orbit may not be available for a period of days as ground-based sensors typically need some time to detect objects launched into high-altitude orbits.

The Garpun satellites are the replacement for the Potok/Geizer satellites that were inaugurated in 1982 to relay data from optical reconnaissance satellites. The final Potok satellite was launched in 2000 and stopped operating in 2009, creating a gap in relay capability as the Garpun follow-on program was not ready for its originally intended launch target of 2009.