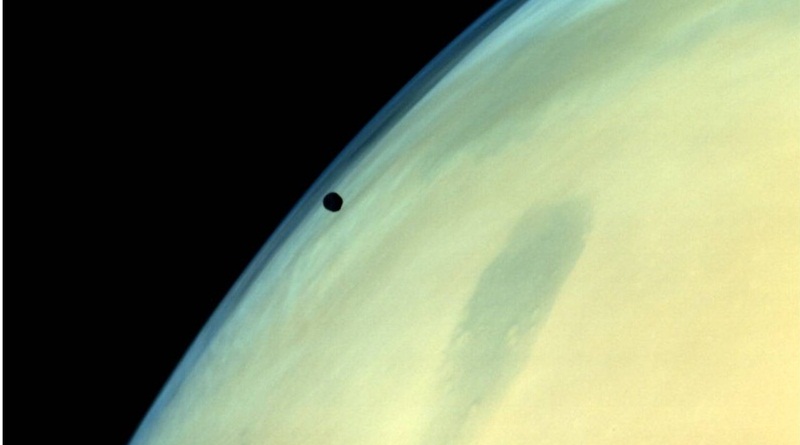 India’s Mars Orbiter Mission recently celebrated the two-year anniversary of its launch after the mission was already able to mark its first anniversary in orbit around the Red Planet. Well in its open-ended extended mission, the Indian flagship mission is looking at challenges that lie ahead such as technical considerations made to keep the spacecraft alive as long as possible, how to survive a long eclipse and how to finish the mission when MOM eventually runs out of fuel.

Launched in November 2013 and arriving at Mars in September 2014, the Mars Orbiter Mission was dedicated to a technical demonstration, providing Indian engineers and scientists with the opportunity of building and operating an interplanetary spacecraft to learn about technical challenges such as navigation in deep space and the autonomy required for missions that have a considerable communications delay as they venture out to distant targets. Because of its nature as a technical demonstration mission, the science involved in the Mars Orbiter Mission was considered a bonus.

According to the Indian Space Research Organization, MOM continues to operate in good health, currently tracked in an orbit of 311 by 71,311 Kilometers around the Red Planet. The spacecraft continues to use its five science instruments including the Mars Color Camera that so far has delivered over 440 photos of Mars, including stunning global shots of the planet that can only be taken by MOM given its highly elliptical orbit that takes it out to a point where its camera can capture the entire disk of Mars in the single frame.

In a report issued by ISRO, it is noted that all instruments of the spacecraft have collected science data that is currently being studied and prepared for publication. Earlier rumors of an announcement regarding methane in the Martian Atmosphere were dismissed by ISRO as more time is needed for the calibration of measurements coming from the Methane Sensor for Mars. MSM so far has contributed to other studies including a published paper in which the dust patterns in the high-altitude regions of Valles Marineris were discussed, based on MSM measurements of the reflectance of the Martian surface and a series of photos acquired several days apart, showing variations in the atmospheric haze layer over the valley that were quantified in atmospheric depth measurements.

MOM’s Mars Exospheric Neutral Composition Analyser (MENCA) conducted mass spectrometry measurements in the tenuous outer layers of the atmosphere and detected a number of species and also studied the variation in exospheric composition with altitude. These findings are currently being prepared for publication and ISRO will work with NASA’s MAVEN mission that is currently entering its own extended mission dedicated to the continued study of the Martian Atmosphere and its evolution.

The Thermal Infrared Spectrometer has also delivered science data that is being used to map the surface composition of Mars, also taking into account data from previous Mars missions of NASA. Its measurements furthermore showed a temperature dip to 10 to 15 degrees in zones of Martian dust storms.

The Lyman Alpha Photometer, designed to measure the deuterium to hydrogen ratio to trace atmospheric loss at Mars, has made 80 measurements to date, allowing the Lyman Alpha intensity to be mapped as a function of altitude. Calibrations are currently in progress to refine the sensitivity of the instrument by making calibration measurements.

In a second scientific paper published by the Mars Orbiter Mission, findings of a rare photo opportunity of the backside of Mars moon Deimos are discussed. The Mars Orbiter is the only craft currently in orbit around Mars capable of seeing the backside of Deimos as the outer of the two Martian moons exhibits tidal-locking with Mars and an observer on the surface of the planet or in a low orbit will only see the same side of it, not dissimilar to Earth’s Moon.

Photos of the backside of Deimos were collected during the early Mariner and Viking missions, but no current Mars orbiter can take this type of photo given Deimos orbits at 20,000 Kilometers in an equatorial orbit and the spacecraft are flying in much lower orbits.

The opportunity for MOM to image Deimos came soon after its arrival at Mars, on December 14, 2014. Four shots were snapped by the Mars Color Camera between 13:05 and 13:06 UTC with 12-second intervals and the use of different exposure settings. The images were taken when MOM was about 4,400 Kilometers from Deimos, about 24,500 Kilometers above the Martian surface. The photos of Deimos reach a resolution of 230 meters, showing it as a body around 11.5 by 11.5 Kilometers in size.

Scientists conclude that the anti-Mars side of Deimos is smoother than the near side without any major craters or surface irregularities. In a calculation of the apparent magnitude of the anti-Mars side of Deimos, scientists found a value slightly higher than the known magnitude of Deimos which could suggest a possible difference in surface characteristics between the near and far side if methodological differences between the studies can be ruled out.

Still continuing to orbit Mars in good health and with plenty of fuel reserves, the Mars Orbiter Mission is hoped to go on for many months to come. Looking at technical challenges that may be ahead, ISRO teams studied maneuver plans and schedules for the appropriate un-loading of the spacecraft’s reaction wheels which has to be completed periodically. Teams also examined future opportunities for the study of Phobos and Deimos as well as the Martian North Pole.

Looking further into the future, the Mission Team will have to prepare the spacecraft for a series of potentially dangerous solar eclipses in February of 2017. These eclipses are unusual because they occur at the apoapsis of the orbit where the MOM spacecraft is traveling at its slowest velocity, relative to Mars which means it spends most time in the high-altitude portion of the orbit. If the Martian shadow is placed so that this orbital path is in shade, MOM has to endure an eclipse exceeding eight hours which will be the case in 2017 for a series of orbits.