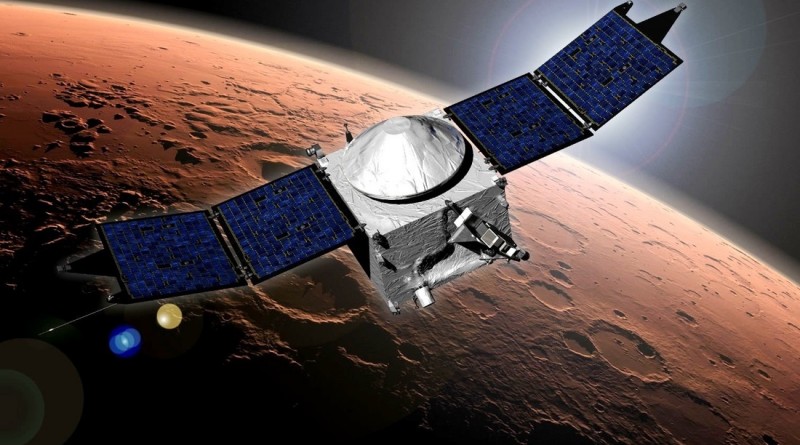 NASA’s MAVEN mission presented in its initial science findings a key factor that played a role in the loss of most of the Martian atmosphere and the transition of Mars from a warm and wet environment capable of supporting life to the cold, deserted world we see today.

Data delivered by MAVEN, now approaching the end of its one-year primary mission, showed that the Martian atmosphere currently is losing gas to space, stripped away by the solar wind. Atmospheric loss driven by solar wind interactions of the upper atmosphere has been a leading theory heading into the MAVEN mission and Thursday’s announcement represents the validation of this hypothesis based on data collected over the course of MAVEN’s first six months in orbit around Mars. The findings of ongoing atmospheric loss at Mars due to solar wind give scientists plenty of work to look into the past and extrapolate how this mechanism of gas loss evolved in the early stages of the Solar System when the sun was much more active and Mars had a much thicker atmosphere.

Scientists used data delivered by MAVEN’s charged particle detectors to measure the inflow of solar wind, consisting of a stream if electrons and protons traveling at extremely high speed. When coming into contact with the Martian atmosphere, the magnetic field carried by the solar wind can generate an electric field in which charged particles can be accelerated to energies high enough to overcome their bond to the planet and escape into deep space.

“Like the theft of a few coins from a cash register every day, the loss becomes significant over time,” said Bruce Jakosky, MAVEN principal. “We’ve seen that the atmospheric erosion increases significantly during solar storms, so we think the loss rate was much higher billions of years ago when the sun was young and more active.”

MAVEN also had the opportunity of measuring changes in loss rate when Mars was hit by solar storms. A higher intensity of particle inflow from the sun led to a loss rate at Mars ten times higher than its average rate.

Orbiting Mars in an elliptical orbit allows MAVEN to study the loss of particles at different locations close to the planet and further out. It was found that atmospheric loss occurs in three different regions, down the tail of the planet where the solar wind flows behind Mars, above the Martian poles where a Polar Plume is formed, and from the very upper reaches of the atmosphere, a cloud of gas extending around the planet. Completing a quantitative analysis, the science team determine that almost 75% of the escaping ions are lost from the tail region while nearly 25% of ion loss occurs in the plume region – gas escape from the extended cloud accounts for only a minor loss rate.

>>The Science behind the MAVEN Mission

Beyond the findings announced on Thursday, the MAVEN science team will attempt to use the models of current atmospheric loss and extrapolate them into the past to see how solar wind interaction acted on a thicker atmosphere. Mars, once a warm, habitable place, began losing most of its atmosphere when it cooled down and lost the protection of its global magnetic field that shielded the planet against the charged particles flowing from the sun.

MAVEN will also provide insights in other possible loss mechanisms such as photochemical reactions in the upper atmosphere, thermal escape or sputtering processes. Scientists also hope to couple MAVEN’s measurements with the Radiation Assessment Detector of the Curiosity rover and the Mars Reconnaissance Orbiter’s Mars Climate Sounder.

The Curiosity rover found that an ancient Mars had an abundance of liquid water on its surface in flowing rivers and stagnant lakes. Flowing water on the surface indicates that the Martian atmosphere was once much thicker, creating the required surface pressure and temperature for liquid water to exist over extended periods of time.

Having delivered its first key results, MAVEN will finish its one-year primary mission next week and head into an extended mission. Over the course of its first year at Mars, MAVEN completed four deep dip campaigns, diving deeper into the Martian atmosphere for a period of days for the study of the composition of the upper atmosphere using its nine science instruments.

At the conclusion of the MAVEN science mission after one year, the spacecraft enters an extended mission that is driven by spacecraft and instrument status as well as operational constraints. The limiting factor for the mission is likely going to be propellant that is used throughout the mission for corridor control, reaction wheel desats and propulsive maneuvers (TCMs, MOI + possible re-start, period reductions, orbit adjustments, Deep Dips).

Without any unexpected events, MAVEN has plenty of fuel margin to perform several years of extended science operations. The current plan is to continue science operations in the low-periapse orbit for 29 months after the completion of the primary mission. After that, the vehicle would raise its periapse to extend its orbital lifetime and slow down orbital decay. In that orbit, MAVEN could operate for up to six additional years performing a combination of science operations and rover communications relay. Extended mission time can be traded for additional deep-dip campaigns during the 29 months of extended science if deemed necessary by scientists.