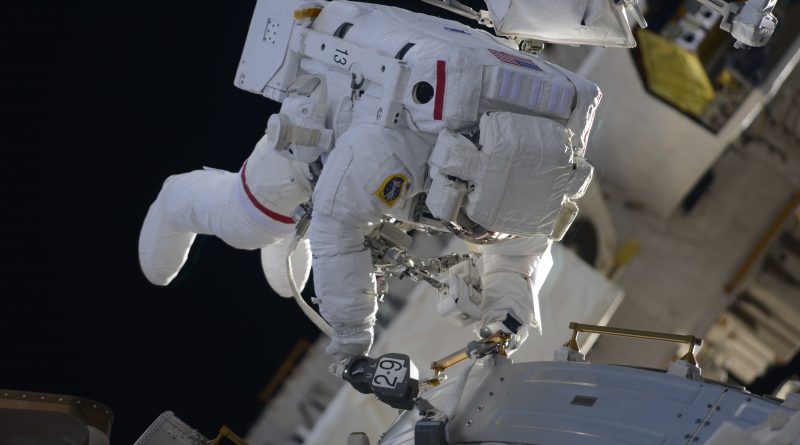 Two experienced NASA astronauts overcame adversity outside the International Space Station on Thursday in a challenging spacewalk that started late and had to be cut short. Faced with technical issues, Drew Feustel and Ricky Arnold were confined to their space suits for over ten hours, of which they spent six hours and ten minutes working outside the orbiting laboratory.

Despite the late start and early end of the EVA, the veteran spacewalkers managed to check all objectives off their EVA task list, notably the installation of external WiFi antennas to expand the Station’s wireless network for an upcoming ecosystem instrument, the removal of a pair of potentially leaky ammonia hoses for further inspection on the ground, and the replacement of a degraded camera group on the Space Station’s truss. The duo also completed some get-ahead work for a pair of upcoming excursions planned around May/June.


The 209th spacewalk in support of ISS Assembly, Maintenance and Upgrades was brought forward from a prospect date in May to take advantage of a brief gap in operations at the end of March – inserting the excursion between the arrival of the Expedition 55/56 crew and the upcoming SpaceX Dragon mission.

With a slight lull in science activities leading up to Dragon’s arrival, ISS managers took the opportunity to advance one of three EVAs planned for May/June to decompress schedules down the road – especially since two experienced spacewalkers were just headed up to ISS and fresh out of ground-based EVA procedures training.

Between them, Feustel and Arnold had nearly 55 hours of EVA experience when embarking on Thursday’s spacewalk, including prior work outside the Space Station.

Drew Feustel, a veteran of Space Shuttle missions STS-125 and 134, accumulated 42 and a half hours of EVA time on three EVAs repairing and upgrading the Hubble Space Telescope in 2009 and three excursions outside ISS in 2014. Educator Astronaut Ricky Arnold completed two spacewalks in 2009 as part of the STS-119 mission that delivered the final Truss Segment and Solar Array Wing to the growing International Space Station.

Gearing up to take a pre-Easter stroll in the vacuum of space, Feustel and Arnold pressed into final EVA preparations after getting up on Thursday, assisted by NASA Astronaut Scott Tingle and JAXA’s Norishige Kanai who helped them in their suits. Ricky Arnold, wearing Extravehicular Mobility Unit #3003, enjoyed nominal suit checks but EMU #3006, worn by Drew Feustel, began acting up via a leak signature during initial checkouts.

After failing three consecutive leak checks, Feustel removed his gloves and helmet to allow their seals to be thoroughly cleaned before the suit was assembled and pressurized again – this time with nominal results and no leak indication.


Down by around one and a half hours on their timeline, the crew resumed the methodical pre-breathe process required before every EVA, then heading into final suit reconfigurations and moving into the Crew Lock Portion of Quest for depressurization. U.S. EVA-49 started at 13:33 UTC when the two spacewalkers switched their suits to battery power and exited the airlock.

Having gone through their mandatory setup of safety tethers, the two EV crew members parted ways as Drew Feustel was headed to the Node 3 end cone where he was to expand the Station’s external WiFi system while Ricky Arnold translated port, retrieved a foot restraint and installed it on the robotic arm to take a ride over to his work site.

The installation of the External Wireless Communications (EWC) antennas on the Node 3 end cone was the primary task of Thursday’s EVA in a bid to expand the reach of the external WiFi network in order to guarantee strong signals are available for instruments installed on the Kibo Exposed Facility – located just forward of the Node 3 end cone.

This capability will be used by the ECOSTRESS ecosystem remote sensing instrument arriving on ISS this summer and Mission Managers wanted to get the installation done as early as possible to allow for testing of the antennas before the high-profile payload arrives.

ECOSTRESS, the “ECOsystem Spaceborne Thermal Radiometer Experiment on Space Station,” is a 465-Kilogram Hyperspectral Infrared Imager developed by NASA’s Jet Propulsion Laboratory, capable of collecting high-resolution images at five thermal infrared wavelengths to measure plant temperature, evapo-transpiration from plant leaves and evaporation from the ground. This unique ability will provide novel data for an assessment of plant response to water stress on a large scale for a comprehensive study of how ecosystems change with climate.

The $30 million ECOSTRESS instrument is booked for launch on the Dragon SpX-15 mission this summer and will take up residence at Exposed Facility Unit 10 on the outboard face of Kibo’s porch.

It will receive power, cooling & low-rate data connectivity for commanding/telemetry transmission through the Kibo Exposed Facility, but the transmission of high-speed science data will occur through the Station’s external WiFi system at a nominal data rate between 2.3 to 4.5 Mbit/s. Installing two External Wireless Communications (EWC) antennas on Node 3 will ensure proper signal strength around the port hemisphere of the U.S. Segment and alleviate any signal strength concerns for external payloads on Kibo.

Drew Feustel made quick work bolting down a pair of In-Orbit Replaceable Hand Rails on the nadir and zenith sides of the end cone, each integrated with one EWC Antenna. He then routed a power/data cable from the zenith to the nadir antenna and a power/data interface in the unoccupied Common Berthing Mechanism on Node 3 Port, underneath the former PMA-3 cover that currently provides long-term protection of the empty CBM.


Taking a position on the free-flying end of the 17.6-meter long Canadarm2, Ricky Arnold was set for a ride over to the Port Heat Rejection System Radiator (HRSR) under the control of Tingle and Kanai who transitioned to the Destiny Robotics Workstation after sending the EV crew outside. His task at the Radiator Beam was the removal of two Ammonia Flex Hose Jumpers running between the radiator and one of six Radiator Beam Valve Modules (RBVMs).

In 2016, ammonia accumulator data from Loop B of the ISS External Thermal Control System indicated a slowly decreasing coolant quantity within the loop – pointing to a small leak somewhere around the port radiator. The Robotic External Leak Locator was deployed in February 2017 and successfully narrowed the source of the leak to the P1-2-0113 RBVM. To get human eyes on the situation, French Astronaut Thomas Pesquet was dispatched to the area in March 2017 and video collected by him helped engineering teams pin-point the most likely source of the leak.

With the flex hose jumpers identified as the likely culprit, Mission Control re-routed ammonia flow and vented the lines. The return of these jumpers is desired to allow for detailed inspections on the ground to reveal the precise leak location and its mechanism. This knowledge will help design future thermal regulation systems for spacecraft heading deeper into space where their maintenance will be a greater challenge than on ISS.

To remove the 1″ and 3/4″ jumpers, Arnold used a pair of EVA scissors to cut lanyards from a pair of electrical connectors before demating the two heater line connectors that used to supply power to the ammonia lines to prevent the coolant from freezing. Next was the release of a pair of clamps holding down the jumpers and demating four fluid Quick Disconnects – all of which cooperated without the often-seen trouble when manipulating this particular type of fluid connection.

While Arnold was busy with the ammonia hoses, Feustel tackled a pair of tasks over at the S0 central truss segment where he inspected a Pump Flow Control Subassembly that will be relocated on EVA-50 coming up in May or June. He then retrieved an unused ammonia jumper that had been stashed inside the S0 truss since 2007 and moved it over to External Stowage Platform 1 to pre-stage it for the upcoming spacewalk.

With the two hoses secured on his tool bag, Arnold was maneuvered over to the zenith-face of the P1 Truss Segment for the EVA’s third major objective: the replacement of a degraded External TV Camera Group (ETVCG) which had lost its ability to pan and tilt.

By this point in the spacewalk, approaching the three-hour mark, Mission Control noted that consumables for the two spacewalkers were limited through their suits’ CO2 scrubbing capability and would only allow the excursion to last five hours and 50 minutes.

Exercising caution since the PET+5:50 mark was considered a hard cutoff, Mission Control revised the CP8 camera replacement task – foregoing the transfer of the HD Camera assembly between the failed Camera, Light, Pan/Tilt Assembly (CLPA) and the spare. Instead, Ricky Arnold removed the camera group as a whole by releasing two secondary and one primary structural bolt followed by sliding the assembly out of its soft-dock.

The removed camera group was handed over to Drew Feustel who then provided Arnold with the spare he had picked up from the airlock. Installation of the CLPA was the reverse process for Arnold – placing it in the magnetic soft-dock and driving the secondary and primary bolts, automatically connecting power/data interfaces in the back of the camera assembly.

In the meantime, Feustel moved the failed CLPA to the airlock as it can only be out in the open for one hour without heater power.

Reaching the four-hour mark into the EVA, Mission Control decided there was enough time after all and instructed Feustel to remove the HD Camera from the failed camera group and head back to Camera Port 8 to hand it off to EV-2.

Installation of the HD Camera was fairly straightforward as it only required Arnold to slide its housing into a receptacle on the standard definition camera, lock up a lever and connect a pair of power lines between the camera light and the HD unit (data from the HD camera is routed inside ISS through the External Wireless system).

Mission Control Houston confirmed to the crew that the activation of the CP8 camera was successful at the PET+5-hour mark, illustrated by sharp HD views of Ricky Arnold as he was backed away from the worksite by the robotic operators. EV-2’s final order of business was the clean-up of the robotic arm – a half-hour task that provided Drew Feustel with a time window for additional get ahead work.

At External Stowage Platform-2, Feustel employed a Pistol Grip Tool to break torque on four Bolts on a spare Ammonia Pump Module – essentially loosening the bolts from their launch torque and driving them to a lower torque setting. This removes the possibility of surprises with stuck bolts on a future Pump Module replacement EVA.

Closing out the EVA in orderly fashion, Feustel and Arnold cleaned up the airlock that had become somewhat cluttered with tool bags over the course of the day’s activities. The end of the spacewalk was marked at 19:43 UTC after an elapsed time of six hours and ten minutes.

Thursday’s excursion brought Drew Feustel’s record to seven career EVAs for a total of 48 hours and 28 minutes, placing him 12th on the all-time list. Ricky Arnold accumulated 18 hours and 44 minutes on three EVAs. Both of them have good chances of adding to their totals via spacewalks coming up in May/June, though NASA has not yet announced who will perform EVA-50/51.