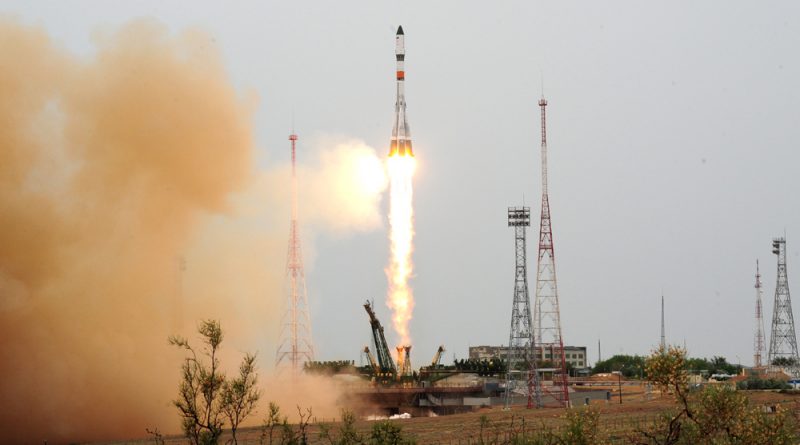 A Russian Soyuz 2-1A rocket arced into overcast skies over the Baikonur Cosmodrome in Kazakhstan on Wednesday, embarking on a nine-minute climb into orbit with the Progress MS-06 cargo spacecraft headed to the International Space Station.

The second Progress mission of the year lifted off from Site 31/6 at precisely 9:20:13 UTC, 3:20 p.m. local time and Soyuz swung to the north east to send the 7,300-Kilogram spacecraft into Low Earth Orbit for a two-day link-up with the orbiting laboratory. Guided by a modernized navigation system, Soyuz 2-1A fired its boosters for the first two minutes of the flight ahead of a rapid sequence of events just before the five-minute mark as the core stage handed to the Block I third stage and the launch shroud dropped away from the Progress craft.

Upon shutdown of the third stage, Progress was pushed off with springs to enter its two-day, 34-orbit rendezvous with ISS, starting with a series of engine burns to climb up into the Station’s orbit for a fully automated rendezvous on Friday with docking to the Zvezda Service Module now set for 11:42 UTC.


The Progress MS-06 mission comes after a busy time on the U.S. Segment of the Space Station, seeing the departure of the Cygnus OA-7 spacecraft on June 4 and the arrival of the Dragon SpX-11 cargo vehicle just one day later, giving the crew plenty of cargo to move and experiments to conduct.

Outside the pressurized modules of ISS, the Station’s robotic duo – Canadarm2 and the Dextre SPDM – were busy unpacking the Multi-User System for Earth Sensing (MUSES) from Dragon’s trunk and installing it on Express Logistics Carrier 4 followed by the Neutron Star Interior Composition Explorer (NICER) that completed final installation on ELC-2 Tuesday night to get into a safe configuration for the Progress arrival.

Packed into the Progress MS-06 spacecraft is a total cargo upmass of 2,500 Kilograms, comprised of the usual mix of crew supplies including food, clothing and hygiene equipment, systems hardware to maintain the Russian Segment of ISS and new experiments for the Russian laboratory modules.


Progress is delivering water for crew consumption and oxygen generation, pressurized gas to top up the Station’s atmosphere and refueling propellant for transfer to the Service Module’s tanks for use in ISS attitude and orbit control.

The MS-06 mission is also carrying four small satellites which, per the current understanding, will be released on an upcoming Russian spacewalk this summer. Packed into the Progress are the 4.8-Kilogram, 3D-printed Radioskaf- RS-6 and 7 satellites that will attempt to demonstrate a self-organization software for future small satellite constellations and measure the density of the tenuous outer atmosphere at different altitudes in Low Earth Orbit. TNS 0-2, weighing in at 4.8kg and measuring 20 by 65 centimeters, will demonstrate small satellite control systems. Finally, Sfera-53-2 is a 13-Kilogram, 53-centimeter diameter sphere for radar calibration measurements and to study atmospheric density by tracking the decay of the sphere, following up on the first Sfera released from ISS back in 2012.

It is the sixth mission of the MS-class of Progress spacecraft featuring upgraded communications and navigation systems, and inaugurating a new Unified Command & Telemetry System replacing the Ukrainian-built Kvant-V radio. GPS and Glonass receivers allow Soyuz and Progress to complete on-board orbit determination and the new KURS-NA radio navigation system reduces the number of antennas on the spacecraft. Other changes include a more robust control system, a new attitude control thruster arrangement and additional debris shielding.


It also marks the first Progress mission in the post-Soyuz-U era after that launcher headed into a well-deserved retirement in February following a four-decade service life. The vast majority of Progress missions launched onboard the Soyuz U booster, with 2-1A beginning to take over in 2014 as part of a soft-transition that initially alternated between the established Soyuz-U/Progress combination and the new launcher-spacecraft pairing.

This turned out to be a wise decision as shown by the failure of the Progress M-27M mission in April 2015 that was caused by an unforeseen oscillatory interaction between the improved Block I third stage of the modernized Soyuz and the Progress spacecraft. With all kinks ironed out over the first several test flights, Soyuz 2-1A is now in charge of all Progress missions.

Soyuz 2-1A enjoyed a very smooth countdown on Wednesday, as has become the norm of the uncontested workhorse of Russia’s Space Program. Entering countdown ops at L-8 hours, Soyuz went through a series of checkouts, battery installations and tanking preparations before the Russian State Commission provided the go-ahead for the propellant loading sequence at L-4 hours.

Over the course of a two-hour sequence, Soyuz was loaded with 274 metric tons of rocket-grade Kerosene and -183°C Liquid Oxygen, with the lower stages also receiving Nitrogen to act as tank pressurization gas in flight and Hydrogen Peroxide to drive the engine turbopumps. The 46-meter tall Soyuz was revealed at T-42 minutes when the two halves of the Service Structure were retracted for launch and Progress MS-06 went to autonomous power 14 minutes prior to the day’s ten-second launch window.

With final readiness calls providing clearance for launch, Soyuz headed into its Automated Countdown Sequence at T-6 minutes, authorized by the insertion of the launch key inside the Launch Bunker near the pad. Soyuz purged its booster and core stage engines with nitrogen to remove any combustible substances and ensure a controlled ignition, next was the pressurization of propellant tanks followed by the handover of control to the Soyuz that also switched to internal power at the T-1-minute mark.

Soyuz came to life at T-20 seconds when the RD-107A engines on the boosters and the RD-108A on the core stage fired up and spun up their pumps to reach a collective launch thrust of over 420 metric ton-force to overcome counterweights and lift the 308-metric-ton Soyuz off the ground.

Soyuz started rising at precisely 9:20:13 UTC under the loud rumble of its engines, balancing in a vertical posture for a little over ten seconds before starting its pitch and roll maneuver. Putting its improved guidance system to use, the Soyuz rolled onto a standard departure path out of Baikonur, flying to the north-east toward the Russian border.

Burning 1,600 Kilograms of propellants each second of powered flight, the Soyuz quickly passed the speed of sound and encountered Maximum Dynamic Pressure as it passed the T+1-minute mark with nominal performance parameters being reported by the launch bunker.

The four liquid-fueled boosters operated for one minute and 58 seconds, each consuming over 39 metric tons of propellants to help accelerate the vehicle to over 1.5 Kilometers per second. Separated by pyrotechnics and pushed outward, the four 19.6-meter long boosters made a clean separation as they swung out and away from the core.

This flight was sticking to the modified Progress ascent profile developed for Soyuz 2-1A to keep the usual drop zones for the Core Stage and other debris. Because Soyuz 2-1A is more powerful than its Soyuz U/FG predecessors, its stages would travel further downrange, requiring its performance to be intentionally decreased to keep the old zones and avoid potential political conflicts. Therefore, Soyuz holds the launch shroud throughout the burn of the core stage to carry some additional weight and allow the core to separate at conditions similar to Progress launches on Soyuz U.

Ten seconds after third stage ignition, the protective payload shroud was separated followed split seconds later by the jettisoning of the third stage aft section covers to fully expose the engine section. Revealed for the rest of its trip into space, Progress MS-06 continued to receive a smooth ride into orbit, as evident by calls made in real time, reporting a normal performance of the third stage and its 30,400 Kilogram-force engine.

Progress MS-06 was aiming for an insertion orbit of 193 by 240 Kilometers, inclined 51.67° with an on-target insertion expected from the Soyuz 2-1A and its modern guidance system. Using the two-day launch-to-docking profile, Progress was launched into an orbit at a 254-degree phase angle to that of ISS instead of the small phase angles of around 30° required for the fast-track rendezvous.

Two seconds after shutdown, at T+8 minutes and 48 seconds, Progress was sent on its way, making a clean separation as indicated by good telemetry being received from Progress in the minutes after separation.

Heading off on a two-day rendezvous with ISS, Progress will be tasked with two initial orbit-raising maneuvers on its third lap around the planet followed by a fine-tuning maneuver on Thursday that will set up for the initiation of the Automated Rendezvous Sequence Friday morning that comprises more maneuvers to enable Progress to reach the Space Station’s 400-Kilometer orbit for an automated docking to the Zvezda Service Module at 11:42 UTC. Progress MS-06 is booked for a stay of nearly six months through early December.