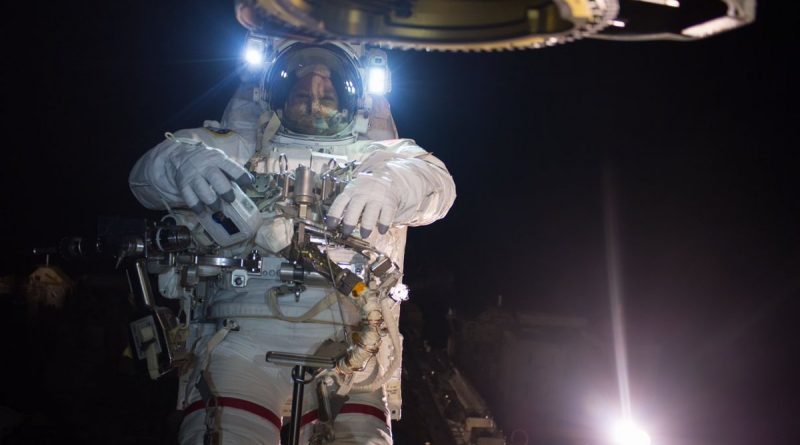 Astronauts Randy Bresnik and Mark Vande Hei are gearing up for their second spacewalk in five days, looking to repeat the success of last Thursday’s excursion that accomplished all primary objectives plus a pair of extra tasks. Venturing outside the International Space Station on Tuesday, the spacewalkers are set for six and a half hours of work on a long task list that ranges from servicing a new end effector on the Station’s robotic arm and removing insulation blankets to putting in place a new set of cameras.

Bresnik and Vande Hei spent six hours and 55 minutes outside the Station on Thursday, replacing one of two Latching End Effectors on Canadarm2 after a motor stall in August left the arm without the ability to form an electrical and data bridge, no longer allowing it to walk off between locations or grasping powered elements. The two made efficient work removing the degraded unit and replacing it with a Latching End Effector formerly used on a temporary payload platform on the Station’s Mobile Base System.


Keeping Canadarm2 in working condition its a major concern for ISS managers since the arm has become a central element for Station operations. Over its 16-year career on Station, Canadarm2 has taken on a number of tasks including the critical role of capturing arriving cargo vehicles and sending them away when their stay at ISS ends. It also assisted in the assembly of the complex by installing large modules and truss segments in the early years of the program and nowadays works in combination with the two-armed Dextre robot to carry out external maintenance and install payloads, tasks that would otherwise require spacewalks.

Thursday’s replacement of the partially failed Latching End Effector A (LEE-A) was the first critical step in returning the arm to full service. Tuesday’s EVA will begin a lengthy lubrication task on the end effector to ensure its moving parts run smoothly for the next several years with additional lubrication expected on the third spacewalk planned this month, to be performed on October 18.


Randy Bresnik, stepping into the void for the fourth time in his career, will reprise the role of lead spacewalker, joined by EV-2 Mark Vande Hei who will be making his second career EVA on Tuesday. They will be supported in orbit by Joe Acaba who serves as the lead IV crew member, assisting the spacewalkers during suit ingress and a multi-hour EVA preparation process. Paolo Nespoli will help during EVA preparation and then serve alongside Acaba as robotics operator as there are a number of robotic elements involved in the EVA.

Designated U.S. EVA-45, the spacewalk is expected to begin around 12 UTC and outlines a fairly long list of tasks for the crew. Unlike Thursday’s EVA that saw the crew work on a main task in a single location, EVA-45 will have them work different tasks including solo work by the spacewalkers.

Exiting the Quest airlock, the two spacewalkers will go through the usual checks of their safety equipment and space suits before heading into their EVA procedure that starts for Randy Bresnik with a very quick task on the outside of the Equipment Lock of Quest where he will reconfigure a latch on a high-pressure nitrogen tank. He will then pick up an Articulating Portable Foot Restraint (APFR) and move to the port side of the Destiny laboratory to set up shop for the rotation of a spare Pump Flow Control Subassembly (PFCS)

Mark Vande Hei will make his way over to familiar ground at the P1 truss where most of the work took place on Thursday. He will stow a tool bag on the port CETA Cart (Crew & Equipment Translation Aid) and pick up an APFR for installation on the new LEE-A of the robotic arm, requiring a socket to be attached to the LEE first. Between EVA-44 and 45, the robotic arm completed two base changes from Node 2 to have LEE-B on the Mobile Base System and LEE-A as the free-flying end of the arm.


The two crew members will meet up at Destiny’s External Stowage Platform 1 for the rotation of the PFCS by 90 degrees – a step necessary for a future ammonia vent on the unit prior to a potential installation on the Station. PFCS is a central component of the Station’s Photovoltaic Thermal Control System, containing all the pumping and routing equipment for flowing ammonia through the cooling loops of the electrical power system components within each of the Station’s eight power channels.

The PFCS spare was delivered along with ESP-1 by Space Shuttle Discovery in March 2001 and uses what is known as a Common Structural Interface CSI – essentially the predecessor of the FRAM (Flight Releasable Attachment Mechanism) used on all but the earliest ISS payloads. Unlike the FRAM that can be manipulated robotically, the CSI can only be operated by spacewalkers via a handle to open and close the latches within a square structural interface grid and the system can not host powered payloads. As the very first Orbital Replacement Unit delivered to ISS, the ESP-1 PFCS uses this piece of “antique” hardware because the FRAM system was not yet operational.

Back at P1, Mark Vande Hei will grab the ORU bag pre-positioned earlier and then ingress the robotic arm for a ride over to Camera Port 9 on the nadir face of the port truss. While the arm maneuvers EV-2 into position, Bresnik will dismantle the foot restraint and bring a camera bag from the airlock to Vande Hei’s location.

A typical ISS Camera Group comprises a stanchion, a CLPA (Camera, Light, Pan & Tilt Assembly) providing standard definition, 4:3 aspect ratio video from the outside of ISS. Some camera groups have been outfitted with an additional high-definition camera assembly over the last year in an effort to bring ISS into the current decade where HD video has become commonplace. Camera Port 9 received its HD Camera on EVA-37 in September 2016, but its standard-definition camera has for some time exhibited signs of degradation and had been earmarked for replacement for some time.

At the worksite, Vande Hei will remove the HD camera by unplugging its electrical connector and sliding it out of its slot on the SD camera enclosure (video from the HD cameras is transmitted wirelessly). Next, he will demate the CLPA connector and release two secondary & a central structural bolt with his Pistol Grip Tool and remove the entire CLPA. Bresnik will hand over the spare and EV-2 will work through the reverse process, soft-docking the CLPA, driving the bolt, connecting the CLPA and re-installing the HD camera.

Once maneuvered back to the forward face of P1, Vande Hei will egress the arm and transition the foot restraint to a Worksite Interface on the truss for the arm lubrication task. Nespoli will bring the new LEE-A within reach of Vande Hei for the lubrication of the Central Rigidizing Ballscrew of the end effector, the easiest accessible component requiring lubrication.

Armed with a grease gun and BLT (Ballscrew Lubrication Tool), Vande Hei will get to work by depositing vacuum grease onto the cradle of the BLT which he can then insert into the end effector to transfer the lubricant onto the screw. Per the EVA plan, only the central screw is to be lubricated on Tuesday with further lubrication on the four latches and their moving parts planned on the October 18th EVA by Bresnik and Acaba.

While Vande Hei is busy with Canadarm2, Bresnik will drop the removed camera off at the airlock and translate over to the Mobile Transporter where he will remove a camera lens that has had a contamination issue for some time. Also, he will demate a socket from the former Latching End Effector A that has been installed on Thursday as POA LEE (Payload/Orbital Replacement Unit Accommodations).

EV-1 will then move his foot restraint back to External Stowage Platform 2 and stow a medium ORU bag at the airlock before venturing around Node 1 and onto Node 3. There, he will be tasked with the removal of two hand rails on the module’s endcone by releasing two bolts on each hand rail with the Pistol Grip Tool. The hand rails are being removed as their ports will be used for the installation of Enhanced Wireless Antennas on a future EVA to improve the Station’s ability to route wireless video from external cameras as well as spacewalk communications/video.

Depending what the EVA clock shows at this point, the crew members will either clean up their work sites or press on with get ahead tasks. Available get aheads include the preparation of an Ammonia Pump module on ESP-2 for future relocation and removal a multilayer insulation blanket/tie down of a skirt on a spare Battery Charge/Discharge Unit to enable the station’s Dextre robot to grasp the unit if a spare is needed in the future. Another get-ahead option would be to keep Mark Vande Hei in position at P1 to complete additional lubrication of LEE-A in order to free up time on the next EVA.

Provided Tuesday’s EVA completes its planned tasks, the October 18 excursion by Randy Bresnik and Joe Acaba will be dedicated to the installation of an HD Camera on Camera Port 3, the replacement of a Camera Group on Port 13, changeout of a fuse on the Dextre robot, lubrication of LEE-A’s latches, and the removal of an MLI cover on a Main Bus Switching Unit spare for future robotic relocation if needed.