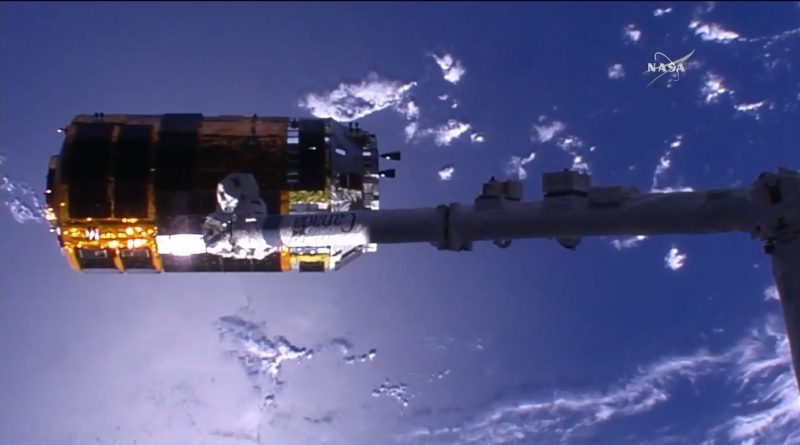 The HTV-5 cargo spacecraft departed the International Space Station on Monday, being released by the Station’s robotic arm and sent on a short free flight of just over a day to set up for the craft’s fiery re-entry that will mark the end of a five-week mission. The release of the craft came one orbit later than originally planned as teams had to recycle the robotics workstation after encountering some minor technical trouble during a first attempt to set the ‘White Stork’ free.

HTV-5 was berthed to the Harmony module of the Station for the past four weeks to facilitate the transfer of six metric tons of cargo delivered to ISS by the vehicle with cargo operations in progress inside the Station and on its exterior as HTV has the unique capability of ferrying external payloads to ISS.

Heading into space in the Unpressurized Logistics Carrier, the Calorimetric Electron Telescope took up residence on the Exposed Facility of the Kibo module for a multi-year science mission, studying energetic particles in the continued search for dark matter signatures. CALET’s position in the external cargo section of HTV was filled with three former ISS payloads, SMILES, the Multi-Mission Consolidated Equipment and the Space Test Program Houston-4 payload that are set for disposal via destructive re-entry.


Delivered aboard the Pressurized Cargo Carrier was a variety of items including two large racks, a new Galley Rack for Node 1 and the second Multi-Purpose Small Payload Rack, 600 liters of water for crew consumption and oxygen generation, plenty of systems maintenance items, consumables for the crew as well as a range of science payloads.

In preparation for HTV’s departure, the crew loaded the craft with plenty of trash and no-longer-needed items. Cargo operations were concluded last week and the team on the ground – HTV Mission Control in Japan and ISS Mission Control Houston provided the formal approval for the craft’s departure – signaling to the crew a GO to close the vehicle out for unberthing, removing air ducts and raiding HTV of fire extinguishers and light fixtures for future use on ISS. On Sunday, the HTV hatch was closed and the crew spent several hours configuring the vestibule – installing the thermal and micrometeoroid cover in the hatchway, putting in place four controller panel assemblies to drive open the bolts holding the HTV in place and removing all but one data and power jumper.

That last power jumper remained in place until Monday morning when HTV-5 was placed on internal power and the crew removed that final jumper to enable them to close the Harmony hatch for the prescribed leak check that confirmed both hatches were air tight. With a good leak check, the stage was set for the unberthing of the ten-meter long vehicle as Canadarm2 had already grappled the vehicle in the days ahead. Driving open four sets of four bolts and releasing four capture latches, the HTV craft was structurally detached from Harmony. Confirmation of unberthing came at 11:12 UTC on Monday and Canadarm2 was in full control of the spacecraft.

ROBO Controllers on the ground then went through a little over an hour of maneuvering to put the arm through a series of motions to position the HTV craft for release. HTV Mission Control completed the necessary reconfigurations for the craft’s departure and, inside the Station, Kimiya Yui and Kjell Lindgren took their places in the Cupola to configure the robotics workstation.

Final polling showed that everything was GO in Houston, Tsukuba and ISS for an on-time departure of HTV planned at 15:20 UTC, set up for the proper lighting conditions to monitor the vehicle’s departure. ISS headed into an attitude hold while Yui and Lindgren released the brakes on the arm and began working through the release sequence.

It was at this point that the robotics workstation delivered an unexpected brake indication, requiring teams to stop and safe the robotic arm to look at the issue at hand. Mission Controllers looked at the unexpected brake command and instructed the crew to cycle between the robotic workstations, moving the Cupola to backup and the Lab to prime and then back again with Cupola in primary mode.

Because of the unexpected nature of the brake indication on the arm and communications constraints, Mission Control decided to push the release to its backup window one orbit later to provide robotics specialists sufficient time to study the problem. The crew aboard ISS had to remain under a no-exercise restriction, but from an operational standpoint there were no concerns with leaving HTV-5 on the arm for another orbit.

Having worked through the issue, controllers ordered the crew back to the Cupola for the opening of the second release window at 16:52 UTC. Mission Control provided the crew with a GO for release and Yui and Lindgren began working through the procedure at their own pace.

Snares within the Latching End Effector of the robotic arm were confirmed to be open at 16:53 UTC, marking the release of the spacecraft. Taking advantage of orbital mechanics, the team waited for HTV to slowly drift to the nadir direction, itself clearing the end effector of the arm without imparting any rates on the spacecraft. When the end effector was clear of the grappling pin, Yui began the retraction of the arm to a safe position, all while ISS and HTV remained in Free Drift.

HTV-5 re-enabled its thrusters two minutes after the release, gently pulsing its engines for two seconds at PET+5 minutes to initiate a small opening rate of just 0.04 meters per second, drifting away along the R-Bar. A second, slightly larger 12-second departure burn, occurred ten minutes later to speed up the craft’s departure of the Keep Out Sphere.

With HTV-5 on its way to depart the Approach Ellipsoid, NASA involvement in the mission ended and Tsukuba was back in full control, responsible for guiding HTV-5 towards its fiery demise. A pair of burns was planned when HTV-5 was at 300 and 5,000 meters to ISS to place the spacecraft into its independent orbit for free flight.

The HTV-5 spacecraft will enter end of mission ops on Tuesday with a set of two orbit-lowering maneuvers ahead of a final targeted deorbit burn that will set up for the craft’s re-entry at 20:31 UTC when HTV will dip deep into the atmosphere and burn up. Any surviving fragments will impact in the Pacific Ocean, far away from inhabited land masses and shipping routes.