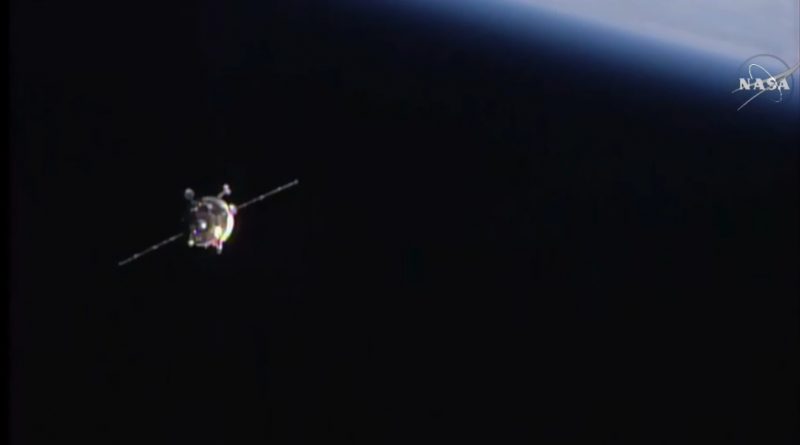 An express cargo delivery took place 400 Kilometers above Earth on Thursday when the Progress M-29M resupply craft made a successful docking to the International Space Station after the first fast-track rendezvous since the Progress M-27M failure in April. Aboard the Russian cargo vehicle are 2,369 Kilograms of food, fuel and supplies for International Space Station and its crew of six, currently in the midst of the 45th Expedition to the orbiting outpost.

Progress M-29M blasted off at 16:49:40 UTC atop a Soyuz U rocket, rising from the historic Site 1/5 at the Baikonur Cosmodrome to begin chasing the Space Station that had passed over the launch site just minutes before liftoff. Burning its core stage and four liquid-fueled boosters, the Soyuz headed uphill on a north-easterly launch trajectory with a total thrust of 422 metric ton-force.

The boosters completed their job just before the T+2-minute mark, shutting down their engines and separating from the rocket that continued powered flight on the core stage alone. Passing 85 Kilometers in altitude two and a half minutes after launch, Progress was revealed when the protective launch shroud was jettisoned, getting a smooth ride into a Low Earth Orbit. Staging occurred 4 minutes and 47 seconds into the flight as the Core Stage finished its burn and the third stage assumed control of the ascent for a main engine firing of just under four minutes.


Progress M-29M was set free at T+8 minutes and 49 seconds, delivered to an orbit of 193.8 by 245.4 Kilometers at an inclination of 51.67° – very close to the target orbit given as 193 by 245 Kilometers. Immediately after separating from the booster, the Progress spacecraft executed pre-programmed commands to deploy its two power-generating solar arrays and the KURS navigation antennas, closely monitored by controllers in Moscow who took control of the mission at the moment of spacecraft separation.

Solar array and KURS deployment was successful and the unified propulsion system of the spacecraft pressurized to become operational for the spacecraft’s high-speed pursuit of the Space Station. Before Progress headed out of communications range for its first lap around Earth, the craft was commanded to go through an initial test of the KURS system to verify its functionality while there was still time to back out of the 4-orbit rendezvous in case of any problems. No problems were detected and Progress moved out over the Pacific for its first orbit.

Getting to ISS in just six hours is a rather complex undertaking requiring a favorable phasing setup between ISS and the Progress, an on-target insertion of the craft and a quick start of orbit-raising maneuvers. To accomplish the last item, Progress was launched with two burns already programmed into its Flight Control System.

These two burns, conducted on the first orbit, are executed regardless of the initial orbit of the spacecraft. Calculations made by ballistics specialists use tracking data collected after launch coupled with the fixed burn parameters to adjust the maneuvers of the second orbit to correct for insertion inaccuracies.

Progress fired its 300 Kilogram-force KTDU-80 propulsion system for the first time at T+46 minutes for a planned 61-second burn to change the vehicle’s velocity by 24.2 meters per second, aiming to raise the perigee and apogee by approximately 30 Kilometers each. Pre-programmed burn #2 was conducted 81 minutes after launch targeting a duration of 51 seconds and a change in speed of 20.3m/s to boost the perigee by 40 and the apogee by 25 Kilometers.

Passing over Russian Ground Stations, the Progress continued checkouts of the Flight Control System and was provided with updated parameters for the second orbit’s burn pair to place the craft in the proper slot for the Automated Rendezvous initiation. The two burns were expected to occur around T+124 and T+153 minutes further boosting the orbit. Progress was tracked in a 308 by 337-Kilometer orbit as it got ready to head into the rendezvous operation.

Entering this orbit, the Progress awaited the initiation of its automated rendezvous at 20:45 UTC – a fully automated sequence including a combination of ground and onboard targeted maneuvers to first move the Soyuz to the vicinity of ISS and then guide its to a precise docking. The ground-targeted DV-5 maneuver was conducted to deliver the Progress to a trajectory taking it within 200 Kilometers to ISS.

The KURS navigation system on Progress and its counterpart on ISS were activated around 21:20 UTC to mark the start of the relative navigation phase of the rendezvous. When KURS was powered up, Progress used its two AKR hemispherical antennas to determine the overall direction of the KURS signal transmitted by ISS so that the vehicle could slew to the proper line-of-sight orientation, pointing the 2AO Kurs antenna to the signal direction. Through 2AO, Progress calculated pitch and line-of-sight angles to help guide the craft closer to ISS.

When reaching a close distance, Progress activated the ASF1 antenna that enabled the vehicle’s computers to calculate the range & range rate in addition to the pitch, heading and line-of-sight angles. KURS performance was verified as part of two tests, one at 80 Kilometers and a shorter verification at 15 Kilometers.

Firing its engine for the DV-6 burn, Progress homed in on its ballistic targeting point – initially aiming for a spot one Kilometer from ISS to keep the option of a passive abort in the event of any problems. Coming in for the close rendezvous, Progress activated its TV system and the Russian crew members aboard the Station reported getting good data through the space-to-space link. Manning the TORU Console was Oleg Kononenko, ready to take over control of the vehicle for a manual approach in case it was needed. He conducted a test of the TORU system by taking control for a short moment to verify Progress was responding to his inputs.

A series of rendezvous impulse burns reduced the initial targeting offset and Progress arrived in the immediate vicinity of ISS – finishing three braking impulses to be ready for the flyaround that was initiated when the vehicle was inside 400 meters and detected that its velocity and angular offset were within operational margins.

Making a slow lap around the Space Station, Progress followed the KURS signals sent from the Zvezda module to get aligned with its docking port. Throughout the flyaround, the Progress maintained a good balance between covering flyaround distance and closing in on ISS to arrive at the planned stationkeeping point.

Arriving at a point 180 meters from Zvezda, Progress initiated a roll to properly position the solar arrays for the docked mission. Coming to a stop with zero relative velocity to ISS, Progress entered Stationkeeping, giving Mission Control a chance to look at the alignment between Progress and Zvezda.

Stationkeeping did not require its full five minutes since alignment was looking very good and Progress was performing as planned, allowing the command for final approach to be issued early. Gently firing its thrusters, Progress began closing in on the Zvezda module of the Station to cover the final 180 meters, starting out at a relative velocity of 0.8m/s that was reduced to 0.1m/s for contact. The Progress continued to use the DPO thrusters to constantly refine its course, keeping the crosshairs aligned with the docking target. With 40 meters to go, Progress retracted the 2AO KURS antenna to clear the docking interface.

Contact & Capture was confirmed at 22:52 UTC when the docking probe of the Progress slid into the drogue on Zvezda’s aft docking port, allowing capture latches to engage to firmly hold the newly arrived spacecraft in place. Docking occurred 400 Kilometers above the Atlantic Ocean, six hours and thee minutes after the vehicle’s liftoff.

When relative motion had dampened out, Progress initiated the retraction of the docking probe and hooks were closed between Zvezda and Progress, firmly joining the docking interfaces to form a pressure tight seal. ISS was switched back to nominal attitude control after entering Free Drift at the moment of docking and in the following minutes, ISS maneuvered back to its duty attitude.

On Friday, the Russian crew members will conduct the standard one-hour leak check to clear the way for the opening of the hatch to gain access to the goods delivered by the Progress.

2,369 Kilograms of cargo are aboard the Progress vehicle comprised of 1,549 Kilograms of Dry Cargo, 350kg of propellant for transfer to the Station’s tanks, 420kg of water and 50 Kilograms of compressed gases.

The Dry Cargo aboard the pressurized compartment of the Progress consists of 430kg of food provisions, 139kg of medical supplies, 267kg of American cargo for the US Segment as well as the Russian crew, 267kg of sanitary and hygiene equipment, and 388kg of maintenance hardware and replaceable elements.

Progress M-29M will remain docked to Zvezda until the first half of December when it will make room for a Soyuz relocation to facilitate the direct handover between the Soyuz TMA-17M and 19M crews just before the holidays.