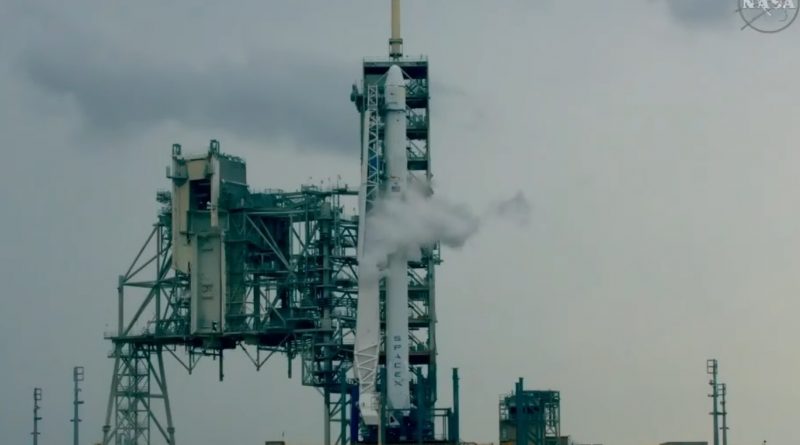 The launch of a SpaceX Falcon 9 rocket with the Dragon SpX-11 spacecraft had to be scrubbed on Thursday due to unfavorable weather conditions at Florida’s Space Coast with two lines of storms just inland from the Kennedy Space Center where the two-stage launch vehicle was being fueled for liftoff.

After the scrub was called following a lightning strike in proximity to Launch Complex 39A, SpaceX announced the mission was moving to its backup date on Saturday with an expected T-0 time of 21:07 UTC. However, the weather situation for the backup slot will look similar as Florida entered its convective season earlier this week with a typical pattern of afternoon thunderstorms.


The launch campaign for the SpX-11 mission was characterized as very smooth heading in to the day’s countdown. Falcon 9, still missing its payload, fired up its engines on Sunday for the typical Static Fire Test and was taken back to its integration facility to meet the Dragon on Monday and Tuesday before returning to the pad at noon on Wednesday. Late cargo load items – including the mice, a fruit fly lab and cold-stowage biology samples – were placed aboard Dragon late on Wednesday with about 24 hours to go until liftoff.

Falcon 9 went vertical at 7:30 a.m. local time on Thursday to press into a ten-hour countdown operation, beginning with the activation of the rocket’s subsystems and final close outs at LC-39A to set up for the fast-paced propellant loading sequence.

At that point weather was still showing a 70% GO forecast with the expectation that afternoon thunderstorms would be directed inland by the Bermuda high-pressure ridge, making for a quick migration of the sea breeze and the thunderstorms it triggers. However, upper level winds were coming from the north-west, bringing some uncertainty as to whether anvil and cumulus clouds could be carried back toward the coast.

Thunderstorms initiated as expected, but their movement showed a trend toward the coast instead of moving inland and satellite imagery showed bands of clouds being driven over the Cape Canaveral area – creating the exact opposite pattern meteorologists had hoped for. Kennedy Space Center was placed under a Lightning Warning as one thunderstorm cell entered the 10-nautical mile radius around the launch complex.

Due to a small chance of storms dissipating prior to T-0, SpaceX decided to proceed into the automated countdown sequence and load the Falcon 9 rocket with propellants. Falcon 9 was in the process of being loaded with over 500 metric tons of Rocket Propellant 1 and Liquid Oxygen when a lighting strike was registered on Merrit Island, within the 10NM area around the launch complex which, per the flight rules, would require a 30-minute wait period without any further strikes before proceeding with the mission.

However, with the countdown already at T-25 minutes and only an instantaneous launch window, the launch team had no choice but to abandon the attempt and set up for the recycle to the backup date on Saturday.

Saturday’s T-0 target will be 21:07:26 UTC with a 60% chance of cooperative weather as the overall pattern remains the same with a slight worsening of the steering direction keeping storms closer to the Space Coast. Primary concerns for the attempt will be violations of the anvil and cumulus cloud rules and flight-through precipitation.

A launch on Saturday would set up for a faster rendezvous of the Dragon with the International Space Station, inbound for a robotic capture at 14 UTC on Monday. With a two-day recycle, Falcon will return to a horizontal position for some change outs of late-load cargo items, in particular scientific payloads like the Rodent Research and Fruit Fly experiments.

The change in Dragon’s launch schedule set in motion a pre-arranged backup plan calling for the departure of the Cygnus OA-7 cargo spacecraft on Sunday for a week-long free flight to support the deployment of CubeSats and the third SAFFIRE in-space fire experiment. Release of the Cygnus spacecraft is planned at 13:10 UTC on Sunday after a six-week stay on ISS.


The Dragon SpX-11 mission marks the first re-flight of a Dragon Spacecraft, involving the sixth production Dragon (C106) that flew a 34-day mission back in 2014 as part of SpaceX’s fourth operational resupply mission to ISS.