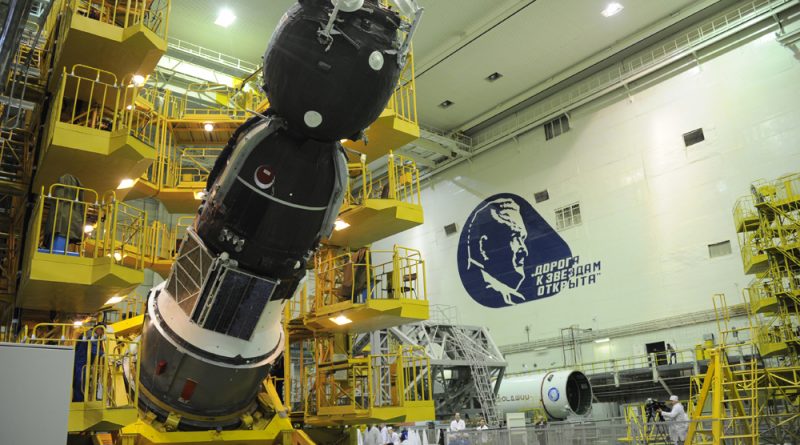 Roscosmos on Monday confirmed earlier reports that the next Soyuz spacecraft to fly to the International Space Station with a crew of two will be replaced by the subsequent vehicle that was at a similar stage in its launch processing campaign.

The Interfax news agency, citing sources at the Baikonur Cosmodrome, reported last Friday that testing conducted on the Soyuz MS-04 spacecraft at the Cosmodrome “revealed a number of problems.” The source also said that the spacecraft would likely need to be replaced by the next in line to keep up the planned launch schedule with liftoff currently penciled in for late March.

The Roscosmos State Corporation issued a brief statement on Monday, confirming that the mission of Soyuz MS-04 would be performed by the spacecraft with serial number 735 instead of number 734. However, Roscosmos noted the switch was not due to a technical issue, but not expressly stated the reason for the late switch.

A report published by TASS cited information that the switch was related to the execution of contracts for delivering crews to ISS. According to the report, Soyuz No. 734 was paid from Russia’s spaceflight budget while No. 735 was financed under a contract with NASA for ISS crew missions.


Due to the need to keep up a steady schedule in Soyuz operations to keep the Space Station crewed, manufacture and processing of the spacecraft is completed so that two vehicles are typically at advanced stages of processing. This is done to have a backup vehicle ready should a spacecraft run into problems during launch processing, allowing it to be replaced with the next one in line without suffering an excessive delay in order to keep the Space Station crewed at all times.

The last time a Soyuz mission switched spacecraft this close to launch was in 2012 when Soyuz No. 704 suffered a breach in the pressure vessel of its Entry Module, rendering the descent vehicle unusable for flight. The Soyuz TMA-04M mission was postponed one and a half months while Soyuz No. 705, originally intended to fly the TMA-05M mission, was readied for liftoff with three ISS crew members.

Soyuz No. 735 was originally planned to fly the MS-05 mission launching in May and will now fly the MS-04 mission with the Expedition 51/52 crew. Liftoff, per the current schedule, is set for March 27 with a two-person crew comprised of veteran Commander Fyodor Yurchikhin and NASA’s Jack Fischer. The third seat inside the spacecraft will be filled with cargo after Russia decided to temporarily reduce its ISS crew contingent to a two-person crew.

The decision to cut the Russian crew by one permanent member was made last year based on a number of factors including cost-cutting measures as well as the delay to the launch of the Multipurpose Laboratory Module MLM that would increase the workload for the Russian Segment crew and justify a complement of three. The story of the Multipurpose Laboratory Module has been long and troubled and remains so until this day. Originally, the MLM – also known as Nauka (Science) – was planned to launch in 2007 but suffered a string of delays with schedules showing the module around 1.5 years from launch at any given time.

Work on re-fitting MLM with a new propulsion system resumed in late 2016 after a political hold-up with launch standing at No-Earlier-Than December 2017, possibly slipping into the first half of 2018.

The current plan is for Soyuz MS-04 and 06 to fly with two ISS Expedition crew members with cargo or short-duration crew members riding in the empty seats. Once MLM is ready for launch, the Russian Segment will go back to a crew of three to deal with the additional work of outfitting the module via a series of spacewalks and internal work. When the new laboratory facility is open for business, workload on the Russian segment will be such to justify a permanent crew of three once again.

The two Soyuz missions with reduced crew size provide an opportunity for a space tourist flight, launching with the Soyuz MS-06 crew of Aleksandr Misurkin & Mark Vande Hei, then spending around a week on the space station before returning aboard Soyuz MS-04 with Yurchikhin and Fischer. Depending on how MLM’s schedule plays out, another tourist flight opportunity could come on the Soyuz MS-08 mission, provided the Cosmonauts trained for MLM operations are not yet needed on ISS.

Eight Space Tourists were flown to the Space Station between 2001 and 2009 at prices of up to $40 million per seat which finances much of the launch cost for a Soyuz mission and is a welcome opportunity for Roscosmos to boost their very limited budget. However, so far no tourist has been named for the MS-06/04 mission which, per the current schedule, would occur in September.