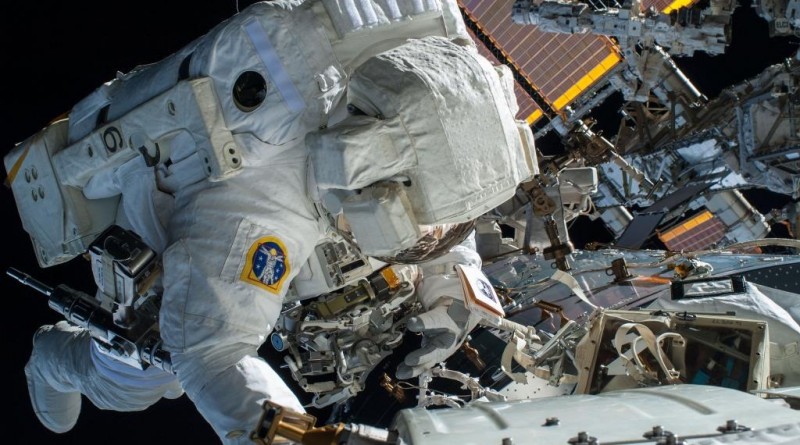 International Space Station managers have given their approval for a contingency spacewalk on Monday to recover the Space Station’s Mobile Transporter that is currently stuck in between work sites – a configuration not considered safe for the upcoming arrival of the Progress MS spacecraft set for liftoff on Monday and inbound for a docking on Wednesday. The EVA – budgeted for a three-hour duration – will be conducted by spacewalk veterans Scott Kelly and Tim Kopra, beginning at 13:10 UTC when the duo will climb out of the Quest Airlock.

The Station’s Mobile Transporter rides on rails along the entire length of the Space Station truss structure, capable of traversing 108 meters to move equipment to various locations on the Station. Delivered by Space Shuttle Mission STS-110 in 2002, the 1,450-Kilogram Mobile Transporter hosts the Mobile Base System with four grappling points for the Space Station’s robotic arm and Dextre robot, providing a mobile base to move the arm wherever it is needed. It also facilitates Payload/Orbital Replacement Unit Accommodations (POA) to be able to transport various payloads between locations on the exterior of the Station.


On either side of the MT is a CETA Cart – ‘crew equipment and translation aid.’ These carts are normally coupled to the Mobile Transporter and simply ride along with it, using the same rail systems. When needed to transport equipment or crew members, the CETA Carts can be detached from the MT and moved along the truss manually. Reaching a top speed of 1.5 meters per minute, the Mobile Transporter can transition between ten work sites along the truss where it can be secured and locked down to provide a stable platform for robotic motion and spacewalk operations.

Wednesday night, the Station’s robotics system was powered up and teams on the ground commanded the Mobile Transporter to move from Work Site 4 where it had been stationed for several weeks over to Work Site 2 for upcoming operations. Very shortly after the MT departed Work Site 4, a fault was experienced by the Translation Drive (TD) Integrated Motor Controller Assembly (IMCA)-A. Repeated attempts to move the transporter in various modes were made by the team on the ground, but without any luck.

Surveys were performed with external cameras and the current thinking at Mission Control is that one of the brake handles on the starboard CETA Cart may have gotten engaged inadvertently, though there are other possible scenarios like the failure one of the four Wheel-Brake Assemblies of the CETA cart.

The brake handles of the CETA Cart were were recently operated by Scott Kelly during U.S. EVA-33 in November. He was tasked with tying down the brake handles in an effort to fix them in position and ensure they would remain clear of any work sites and remain in a disengaged position. Kelly also removed the CETA Cart Coupler and swingarm. According to the publicly available ISS Status Reports, the Mobile Transporter had not been moved since the EVA until Wednesday, suggesting the possibility that the CETA cart brakes were engaged in the process of the spacewalk.

Preparations for Monday’s spacewalk were underway throughout the weekend as Scott Kelly and Tim Kopra prepared their space suits and the Quest Airlock as well as any tools they may need, preparing for all eventualities. Tim Peake, having recently launched with Kopra, will be in charge of crew suit up and airlock operations and assisting the crew in case of a loss of communications with the ground when they are outside.

Scott Kelly, serving as EV-1, will wear a space suit with red stripes as he embarks on his third career EVA after conducting two spacewalks with Kjell Lindgren in October and November for a total of 15 hours and 4 minutes. Tim Kopra will be EV-2 with an all-white suit. He has the advantage of having just launched on his ISS mission, having recently completed EVA training runs. On his previous mission to ISS in 2009, he conducted one EVA of five and a half hours.

Climbing out of the Quest Airlock, the two crew members will go through the typical checks of their tethers and spacesuits before departing for the Mobile Transporter, located on the central truss segment above the Destiny Laboratory.
Arriving at the Starboard CETA Cart, the two crew members will first conduct a visual inspection of the two parking brake, two dynamic brake and the parking brake release handles and report to Mission Control what setting they are in.

Should one of the brake handles indeed be engaged, the job will be easy for the spacewalkers – simply disengaging the handle, releasing the brakes and tying down the handle in a disengaged position. One area concern is stored energy between the Mobile Transporter and the CETA Cart as the MT was pushing it during the repeated attempts to move. Therefore, the crew members will be positioned very carefully, away from the direction of the possible motion of the CETA Cart in case energy is released when the brakes come off.

In case all brake handles are released, the matter will get more complex for the team on the ground and the crew in orbit. Their next step would most likely be a cycling of all handles to exercise the brakes and attempt to release them. If that still will not resolve the situation, the next troubleshooting step would be to open up the CETA Cart Covers to inspect the Wheel-Brake Assemblies in all four corners of the cart for any signs of damage. A replacement of a Wheel-Brake Assembly is possible in the event one of the four systems is failed for good.

As a last resort, the CETA Cart could be detached from the Mobile Transporter and either pulled to the end of the truss segment (if possible) or tied down in the present position – freeing up the Mobile Transporter, but also blocking its way for future moves. The CETA Cart could also be decoupled from the rail and moved to a stowage location which would involve one crew member riding the robotic arm with the CETA Cart in hand, however, this type of complex operation would require more preparation time.

Should the situation resolve quickly, Kelly and Kopra could elect to perform a series of get ahead tasks. One outstanding task is the replacement of the failed Sequential Shunt Unit in the 1B Power Channel of ISS, but this task can not be performed on this EVA for two reasons – a) requirements for the SSU R/R call for a long night pass only possible when ISS in a low beta-angle condition because the electrical box can only be switched out when the solar array is not generating power, and b) the spare SSU is currently inside ISS being readied for testing to verify it is functional before being taken outside.

The get-aheads available for Monday’s EVA include the routing of power and data cables that could not be completed during EVA-32 in October. The leftover task consists of routing a cable from the Destiny laboratory forward to Node 2 Zenith to a stowage location near the Common Berthing Mechanism for future installation on Pressurized Mating Adapter 3 and International Docking Adapter 3. Another get-ahead would be the opening of protective covers on the Station’s Electrical Power System to provide access to the systems for the Dextre robot that could be used in the future for the replacement of modular components. Another leftover task from EVA-32 is the installation of a Non-Propulsive Vent on the Node 3 module.

After a short EVA of three to three and a half hours – barring no surprises – Kelly and Kopra will head back inside to close the airlock hatch and begin repressurization.

Their weekend work preparing their Space Suits was not without issue as one of the originally intended suits needed to be replaced in the continued saga of the now infamous Fan Pump Separator.

Looking back at recent years, ISS had a number of issues with the EMUs starting in 2013 when a serious water leak emerged on Luca Parmitano’s space suit while he was working on the outside of ISS leading to a termination of the spacewalk and Parmitano reaching the safety of ISS just in time with water pooling around his head – covering his eyes, nose and ears when his helmet was taken off by the Station crew.

Through on-orbit testing and troubleshooting, teams traced the problem back to the Fan Pump Separator – a critical component that circulates oxygen through the suit while its pump transports the coolant fluid and the water separator removes water from the ventilation loop to condition the air that is returned to the crew member via the T2 port of the helmet. A detailed study was conducted to trace back the issue and NASA identified a rather complex mechanism that led to the failure of the EMU’s Fan Pump Separator due to a build up of silica contamination that originated within water support system of ISS that is regularly used to flush and replenish the water cooling system of the suits.

However, despite the elimination of what was thought to have been the root cause of the Fan Pump Separator issue, problems with the component and other suit parts continued to take up the crew’s time who often spent entire days inside the airlock performing suit maintenance. The Dragon SpX-3 mission delivered the #3003 suit to ISS and returned EMU #3015 to Earth after it exhibited issues with its sublimator and telemetry systems.

In October 2014, the Fan Pump Separator of EMU #3005 failed to spin up during an EMU Loop Scrub. After the FPS seized up on start, it was removed from the suit and replaced by a spare in December.

In January of this year, EMU #3011 showed a failure when attempting to re-start its Fan Pump Separator and troubleshooting could not recover the system. This required EMUs to be switched for a set of three EVAs that were conducted in February and March by Terry Virts and Barry Wilmore who used EMUs #3003 and #3005. The problematic FPS from the #3011 suit was returned to Earth by Dragon SpX-5 for detailed testing and further study of the ongoing issues with this particular component that had been in use for many years on the current EMU design.

However, during a regular test in late May, EMU #3010 showed insufficient cooling water flow due to an apparent problem with its Fan Pump Separator that had been installed on this suit since May 2014. Given the trouble with the Fan Pump Separators on all space suits on ISS, NASA continues to investigate the potential causes with great interest. The failed FPS was removed from EMU #3010 in early June and returned to Earth aboard the Soyuz TMA-15M spacecraft.

Originally planned for EVA-34 were EMUs #3010 and #3003 – both had been in use for EVAs 32 and 33 and showed no issues. On Saturday, during preparation for Monday’s excursion, the fan of EMU #3003 failed to start up and the suit was replaced by #3011 requiring the crew to switch batteries, MetOx containers as well as the EVA arms and legs from #3003 to #3011 to provide the correct suit size for Tim Kopra. Because #3011 has a fresh Fan-Pump-Separator, it is considered the best option for this spacewalk. Given the late suit switch, Kopra will do an additional fit check when ingressing his suit on Monday to make sure it comfortably.

Although there is no indication of any danger for water intrusions into the space suit from the FPS, the usual precautionary measures will be taken by Kelly and Kopra, notably the snorkel in the space suit that could be used in case water enters the helmet, and the Helmet Absorption Pads that are checked multiple times during the EVA to ensure no water is being absorbed by it.

A newly refurbished suit (#3008) arrived aboard the Cygnus OA-4 mission and is currently in storage aboard ISS, to be readied for future use when needed.