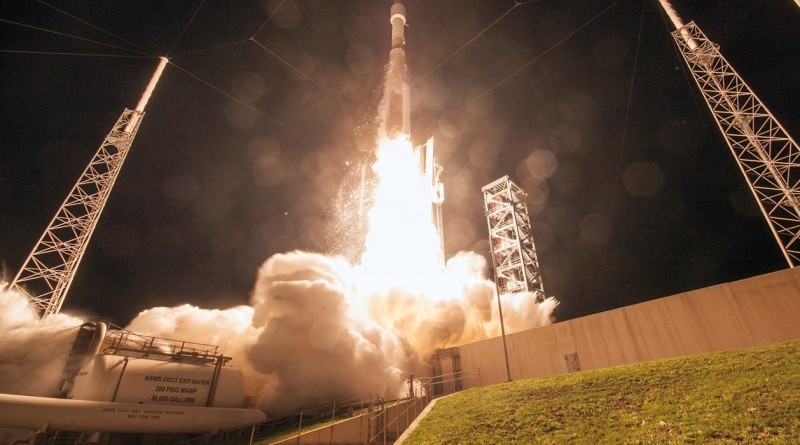 The Atlas V 421 rocket carrying the Mexican communications satellite lifted off from Cape Canaveral at 10:28 UTC on Friday, embarking on a mission with two Centaur upper stage burns to deliver the spacecraft to a Geostationary Orbit with an increased perigee. Firing its boosters for a little over 90 seconds and operating the RD-180-powered first stage for just over four minutes, Atlas V handed propulsion to the upper stage that was tasked with an initial burn of over 13.5 minutes to aim for an elliptical transfer orbit.

The insertion parameters measured by Centaur were given as 4,796 by 35,789 Kilometers at an inclination of 26.99°. Spacecraft separation occurred 2 hours & 52 minutes after launch.

The Joint Space Operations Center provided the following orbital data for the two objects released into orbit by this launch (2015-056):

Object A is the Morelos 3 spacecraft, shown in an orbit very close to the planned orbit parameters with a very slight overperformance on the perigee altitude which will actually come to the benefit of the propellant budget of the spacecraft. Morelos 3 will begin firing its liquid-fueled engine in the coming days to circularize its orbit to achieve a 15-degree Geosynchronous Orbit at 117° West.

Object 056B is the Centaur upper stage that conducted a Collision and Contamination Avoidance Maneuver, lowering its orbit to move out of the way.