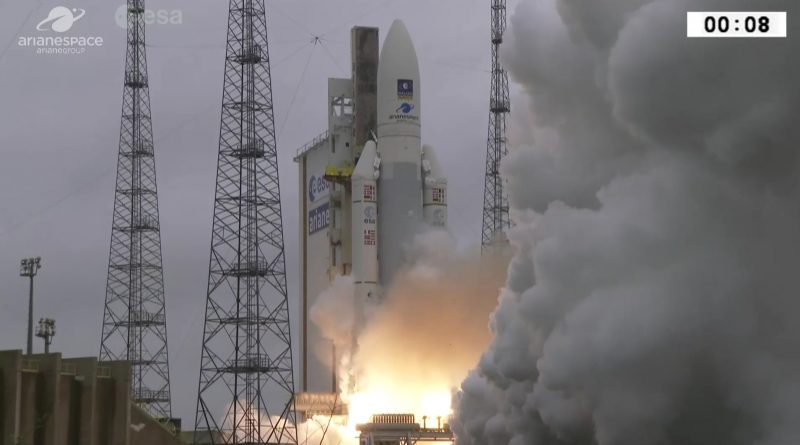 Europe’s Ariane 5 rocket lifted off from the Guiana Space Center on Tuesday on its second mission in support of the Galileo Navigation Satellite System, aiming to add the next four members to the growing constellation that is set to reach operational strength in 2018 to begin offering global navigation services.

Flying in a specially modified version of its Ariane 5 ES configuration, the vehicle leapt off the launch pad at precisely 18:36:07 UTC for a twenty-minute propulsive flight phase to reach a preliminary orbit ahead of a lengthy coast of over three hours to climb to the peak of the transfer orbit. The critical circularization maneuver by the rocket’s second stage dispatched the Galileo FM-15, 16, 17 and 18 satellites into a Medium Earth Orbit nearly 23,000 Kilometers in altitude and all four passengers successfully separated from the launch vehicle over three and a half hours after launch.

Operated by the European Commission, the €7-billion Galileo project has the primary goal of providing Europe with independent access to precise timing and navigation services on a global scale as an integral part of many applications beyond vehicular navigation – explaining the desire to have an independent system that ends reliance on foreign systems like the U.S. Global Positioning System which may not be available in times of crisis.


Galileo, in its architecture, is similar to GPS and the Russian Glonass navigation systems – operating a large number of satellites in multiple orbital planes in Medium Earth Orbit to have at least four satellites in view from any position on Earth to permit position triangulation via three satellites while the fourth acts as timing reference to increase accuracy. For full operational services, Galileo requires 24 active satellites in three orbital planes with an additional two satellites per plane acting as in-orbit spares to ensure services can continue even if operational satellites fail.


The decision to modify the Ariane 5 ES launch vehicle for Galileo launches was made in 2012 to have at least two launchers available for the project to meet the planned 2020 in-service date even if one vehicle becomes unavailable for technical or political reasons. Ariane 5 supported its first Galileo quartet launch in November 2016 when it lifted the FM-7, 12, 13 and 14 satellites.

Although Tuesday’s launch was the first Galileo mission of the year, the project can look back at a very busy 2017, overcoming a potentially serious problem related to the atomic clocks installed on the Galileo fleet and tasked with keeping time at the ultra-high precision needed for sub-meter navigation accuracy. News emerged in January that of the 72 atomic clocks deployed on 18 operational Galileo satellites, ten had encountered failures of which nine were considered failed for good.

Even more worrying, the issues affected both types of clocks deployed on the satellites – the Rubidium Atomic Frequency Standard (RAFS) clocks considered a well-proven and robust spaceborne clock system, and the Passive Hydrogen Maser (PHM) clocks installed on Galileo for their higher accuracy and time stability.

The clock problems prompted a delay to the FM 15-18 launch from mid-year to provide sufficient time for a detailed investigation before committing additional satellites with potential flaws in their clocks to flight.

Two separate failure mechanisms for the two clock types were uncovered by the investigation. On the RAFS clocks, an inexpensive electronics component was implicated that had become susceptible to short circuits due to a particular testing procedure performed on the ground. These findings were corroborated by an investigation into the failure of RAFS clocks on the Indian IRNSS navigation satellites that were procured from the same Swiss manufacturer and suffered the same defects. The failures of the PHM clocks were traced back to the operational parameters at power-on and power-off, requiring procedural changes on how the PHMs are operated.

With corrective action taken by switching out the faulty part on the RAFS clocks and changing the power cycle procedure for the PHMs, Galileo was ready to resume launches and the next four satellites, nicknamed Nicole, Zofia, Alexandre and Irina, arrived in French Guiana in September and October to undergo final testing and propellant loading before taking their places around a purpose-built adapter.


Gearing up for its sixth and final launch of 2017, Ariane 5 entered countdown operations at 6:28 UTC on Tuesday with power-up of the launch vehicle for detailed testing to clear the way for the start of tanking on the first stage at 13:43 UTC to load the vehicle with some 170 metric tons of Liquid Oxygen and Liquid Hydrogen.

The Ariane 5 ES variant, called upon for its seventh mission on Tuesday, was originally developed for the Automated Transfer Vehicle by taking the improved Solid Rocket Boosters and EPC core stage of the Ariane 5 ECA variant and placing the EPS storable propellant second stage of the Ariane 5 GS predecessor on top to allow for re-start capability.

Additional modifications had to be made to the Ariane 5 ES vehicle to make it suitable for Galileo missions that are taking the vehicle to new heights since the five ATV flights only took the vehicle to 260 Kilometers with a launch duration of one hour whereas Galileo requires a flight duration of four hours to reach its orbital destination over 22,900 Kilometers in altitude. This required modifications to the thermal control system and the addition of batteries to support the extended flight duration.

Additionally, to meet the performance requirements for lifting four 715-Kilogram satellites and their 420kg dispenser directly to MEO, weight saving measures were implemented on the EPS second stage and Vehicle Equipment Bay that had originally been designed to support the much heavier ATV that weighed in at up to 21 metric tons.

With the first stage fully loaded with cryogenics and Stage 2 receiving ten metric tons of self-igniting propellants well ahead of launch day, the stage was set for liftoff. Ariane 5 was awarded a clean bill of health after final checkouts, the Galileo quartet switched to battery power and weather was reported GREEN after slight concerns associated with thunderstorms subsided over the course of the countdown.

Soaring to life when clocks hit zero, Ariane 5 fired up its Vulcain 2 main engine for seven seconds of performance monitoring before the point of no return – ignition of the twin EAP boosters that catapulted Ariane 5 off its ELA-3 launch pad at precisely 18:36:07 UTC, the optimized liftoff time to dispatch the satellites into Plane A of the Galileo constellation. Ariane 5 rose with a total thrust of 1,420 metric-ton-force and swung onto an unusual launch azimuth of 35 degrees – a north-easterly departure to reach a 57° orbit instead of the typical equator-hugging Geotransfer missions that have become Ariane’s bread-and-butter business.

Within a minute of launch, the 48-meter tall rocket had passed the speed of sound and was approaching Maximum Dynamic Pressure on its way out of the dense atmosphere. The twin EAPs, each burning 237 metric tons of propellants, dropped away from the rocket at T+2 minutes and 20 seconds and Ariane 5 continued pushing toward orbit with a thrust of 136,000 Kilogram-force, relying on its Vulcain engine alone.

When reaching an altitude of 115 Kilometers three minutes and 44 seconds into the flight, Ariane 5 split open and separated its 14-meter long fairing halves, revealing the Galileo satellites for the test of their ride into orbit. The EPC cryo core fired until T+8 minutes and 55 seconds to accelerate the vehicle to a speed of 8.2 Kilometers per second with separation of the 30.5-meter long stage occurring five seconds later to hand off to the EPS upper stage.

The second stage’s Aestus engine soared to a thrust of 2,800-Kilogram-force for a planned burn of ten minutes and 50 seconds to lift the stack into an elliptical transfer orbit peaking at 22,925 Kilometers in altitude. The initial propulsive flight phase ended 19 minutes and 58 seconds into the mission when Ariane 5 reached its preliminary orbit and entered a lengthy coast phase of three hours and eight minutes to climb all the way to apogee.

EPS ignited on its critical second burn three hours and 28 minutes into the flight, firing for a little over six minutes to deliver the Galileo satellites into a circular orbit 22,922 Kilometers in altitude, at an inclination of 57 degrees – positioned 300 Kilometers below Plane A of the Galileo constellation.

Launching the satellites into an orbit below their operational altitude allows for safe disposal of the EPS upper stage and also keeps the constellation orbit clean in case a satellite can not be activated after deployment. Arriving in its planned orbit, EPS was tasked with two deployment events – sending pairs of Galileo satellites into opposite directions at T+3 hours and 35 minutes and T+3 hours and 55 minutes to ensure all four go their separate ways without risk of re-contact.

The next Galileo mission is currently planned for July 2018 when the next four members of the constellation will ride into orbit atop an Ariane 5, raising the total number of IOV and FOC satellites to 26 in order to bring the constellation to operational strength.