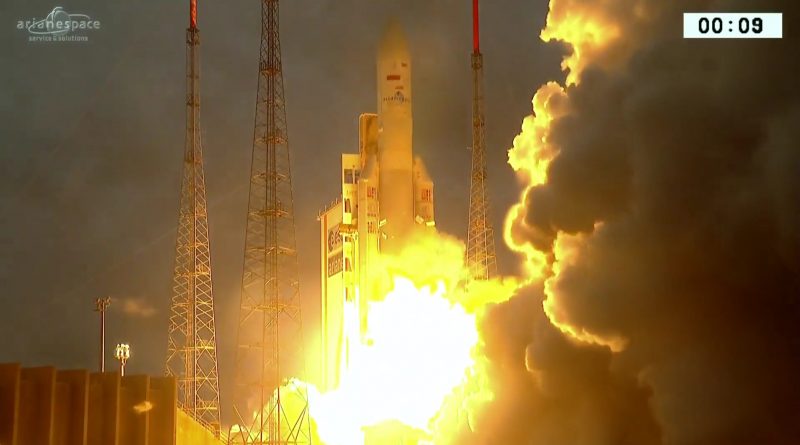 Europe’s Ariane 5 rocket leapt of its launch pad on the edge of the Amazon jungle at sunset on Tuesday, flying into the dark of night to lift a pair of commercial communications satellites into orbit for operators in Latin America and Indonesia. The 55-meter tall rocket thundered off from the French Guiana coast line at 21:39 UTC, just three minutes before the local sunset, embarking on a forty-minute mission to deliver over ten metric tons into a highly elliptical orbit.

Stowed away under the protective payload fairing of the 91st Ariane 5 were the SKY-Brasil-1 and Telkom 3S satellites, set for a 25-minute powered climb into a standard Geostationary Transfer Orbit peaking nearly 36,000 Kilometers above the equator followed by 15 minutes of maneuvering to separate the two payloads. It marked the first of six planned dual-payload delivery missions scheduled for Ariane 5 this year with a seventh mission toward the end of the year lifting a group of four Galileo satellites into Medium Earth Orbit.


Riding in the upper payload berth of the Ariane 5 workhorse was SKY Brasil-1, operated by AT&T subsidiary DirecTV Latin America to beam subscription based TV services to Brazil.

According to the company, the satellite will triple Sky’s current broadcasting capacity, supporting legacy digital television services and expanding coverage for HDTV and 3D video distribution. Up to 20 additional spot beams will carry regional television channels.

Built by Airbus Defence and Space in Europe, the 6,000-Kilogram satellite hosts a powerful Ku-Band payload of 60 transponders plus 21 high-power Ka-Band transponders to be leased to Arabian satellite operator YahSat.

Telecommunications giant Intelsat owns a minority of the satellite, marketed under the Intelsat 32e designation to deliver Internet services to aeronautical and maritime markets in the Atlantic and Caribbean region. Outfitted with a hybrid propulsion system, SKYB-1 is planned to operate for an extended mission of 19 years stationed at 43.1 West longitude in Geostationary Orbit.

Telkom 3S made its way into orbit in the lower payload slot underneath the Sylda adapter that enables Ariane 5 to fly a pair of satellites in a stacked configuration. The 3S satellite is the replacement for Telkom 3 that was stranded in an unusable orbit in 2012 when its Proton/Briz-M launch vehicle suffered an emergency engine shutdown in the midst of a planned multi-burn climb directly into Geostationary Orbit.

The Thales-built satellite weighs in at 3,550 Kilograms and hosts a hybrid communications payload of 24 C-Band, eight extended C-Band and ten Ku-Band transponders with C-Band coverage dedicated to delivering high definition TV distribution across Southeast Asia and Ku-Band services focused on the Indonesian territory for mobile communications and broadband Internet. Set for a 16-year mission from a position at 118 degrees East, Telkom 3S will replace the Telkom 2 satellite that launched back in 2005.

Tuesday’s flight marked Arianespace’s second trip to Geostationary Transfer Orbit this year following-up on a rather unusual Soyuz mission in January that became the first of the Russian workhorse to head into GTO from the equatorial launch base, lifting the HispaSat 36W-1 satellite. Another GTO mission of Soyuz is expected in April with SES-15 – taking pressure off Ariane’s launch manifest by moving lower-berth passengers over to Soyuz.

Tuesday’s sunset liftoff was preceded by a smooth countdown picking up early in the morning, eleven hours and 23 minutes prior to the opening of the day’s 86-minute launch window. Ariane 5 was well behaved during a multi-hour testing campaign leading into the cryogenic tanking procedure that picked up inside four and a half hours to liftoff as 184 metric tons of supercold Liquid Oxygen and Liquid Hydrogen were pumped into the two-stage vehicle. Ariane 5 stood fully fueled while teams checked off the preparatory steps for the seven-minute synchronized sequence that transitioned the rocket to a fully autonomous launch configuration.

Upon the countdown reaching zero, Ariane 5 fired up its Vulcain 2 engine to soar to a liftoff thrust of 96 metric ton-force under careful watch by computers before the point of no return – ignition of the twin EAP boosters at 21:39:07 UTC.

Rumbling away from its equatorial launch base, Ariane 5 balanced in a vertical posture for the first ten seconds of its flight before swinging to the east for a quick flight across the Atlantic, its twin Solid Rocket Boosters and powerful core stage generating the equivalent power to ten Airbus A380 aircraft at full throttle.

Ariane 5 arced into partly cloudy skies over the space base with a total thrust of 1,420 metric ton-force, passing the speed of sound just 49 seconds into the mission. The twin boosters exhausted their 237-metric ton propellant supply at T+2 minutes and 20 seconds, dropping away from the still-firing core stage 65 Kilometers in altitude after helping accelerate Ariane 5 to a speed of two Kilometers per second.

With the boosters gone, Ariane 5 relied on its Vulcain 2 engine alone, guzzling down 300 Kilograms of supercold cryogenic propellants per second to generate 136,000 Kilogram-force of thrust when flying through the rarefied upper atmosphere. As soon as the rocket had left the discernible atmosphere, it separated its 17-meter long payload fairing, revealing the SKY Brasil-1 satellite, the larger of the two passengers, while Telkom 3S remained hidden from view underneath the Sylda adapter.

The first stage shut down its Vulcain 2 engine just shy of T+9 minutes, placing the rocket onto a sub-orbital path peaking just over 160 Kilometers in altitude. The 30.5-meter core stage dropped away four seconds after engine shutdown, clearing the way for ignition of the second stage nine minutes and five seconds into the mission.

Firing up its 6,400 Kilogram-force HM-7B engine, the second stage was set for quite the roller coaster ride, initially focusing on building-speed at the cost of some altitude and then heading up the hill, aiming for a mind-boggling injection speed of 9.4 Kilometers per second. Ariane 5 arrived over Africa after a 20-minute flight across the Atlantic and the propulsive phase of the mission ended just after T+25 minutes when the second stage shut down its engine after sensing it had arrived in the target orbit of 250 by 35,736 Kilometers at an inclination of 4 degrees to either side of the equator.

After a smooth climb into orbit, the mission transitioned from raw rocket power to the precision of the second stage’s cold gas thruster system to precisely position itself for the separation of the payloads. SKY Brasil-1 was released 27.5 minutes into the flight, heading off on a mission of nearly two decades to serve TV customers in Brazil and Latin America.

With the first passenger on its way, the ESC-A second stage swung around to jettison the Sylda adapter at T+29 minutes ahead of ten minutes of maneuvering before Telkom-3S, affixed directly to the second stage, was deployed to set sail on its journey to deliver communication services to Indonesia and surrounding regions.

Both satellites were to check in with their respective ground stations after separating from the booster and are currently in operation by their manufacturers that will guide the spacecraft to their planned locations in GEO and complete testing before turning the satellites over to their operator.

Tuesday’s launch marked the 235th launch of an Ariane rocket in a program that premiered in 1979, it was the 91st flight of the Ariane 5, the 60th using the ECA configuration.

It was the 77th successful Ariane 5 launch in a streak that continues since 2003.