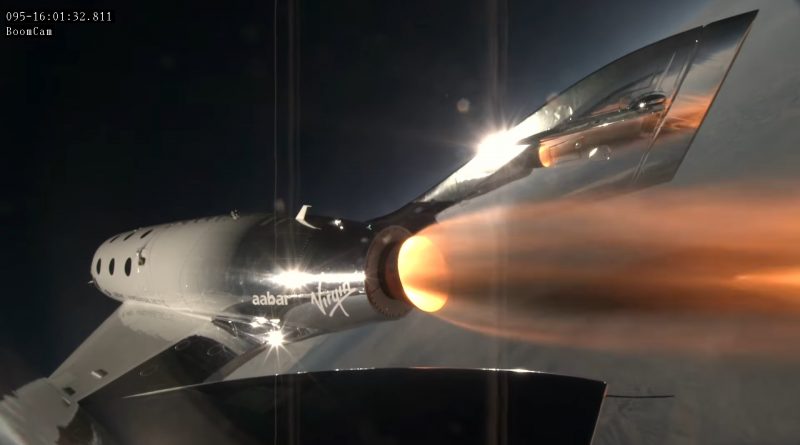 Virgin Galactic’s VSS Unity, the company’s second SpaceShipTwo, flew under rocket power for the first time on Thursday in a major milestone toward turning the winged suborbital spaceship into commercial service for tourist and science flights to the edge of space. Thursday’s powered flight came three and a half years after the first SpaceShipTwo was destroyed in a testing accident that left one of its pilots dead while the other sustained injuries.

“After two years of extensive ground and atmospheric testing, the passing of this milestone marks the start of the final portion of Unity’s flight test program,” Virgin Galactic said in a statement. “Today’s flight saw an envelope expansion for the program as a whole in terms of rocket burn duration, speed and altitude achieved.”


VSS Unity took flight suspended under the WhiteKnightTwo carrier aircraft, VMS Eve, at 8:02 a.m. at Mojave Air and Spaceport, California. Controlled by pilots Mark Stucky and Dave Mackay, Unity was released at an altitude of 14.2 Kilometers over the Sierra Nevada mountains and fired its hybrid motor for thirty seconds of rocket power, putting the vehicle into an 80-degree climb and reaching a peak speed of Mach 1.87 at shutdown of the Nitrous Oxide/HTPB-powered motor – blazing uphill at nearly twice the speed of sound.

Enjoying its first taste of supersonic flight, Unity reached a peak altitude of 25.7 Kilometers (84,271 ft) before entering its feathered configuration with its tail booms moving up to a 60-degree angle relative to the main fuselage. The tail booms lowered as the vehicle passed through 50,000 ft and Unity dumped residual oxidizer as it glided to a smooth runway landing at Mojave a little over ten minutes after release.

“The flight has generated valuable data on flight, motor and vehicle performance which our engineers will be reviewing,” the company said after the test. “It also marks a key moment for the test flight program, entering now the exciting phase of powered flight and the expansion to full duration rocket burns.”

Thursday’s flight was the first powered test for VSS Unity as Virgin Galactic now enters new territory of its test program to fully qualify the SpaceShipTwo design for commercial operations. The flight featured a longer burn, and thus higher top speed and peak altitude, than prior powered tests by the VSS Enterprise that completed three successful powered flight tests in 2013 and 2014, reaching a peak speed of M1.4 and an altitude of 22 Kilometers.


On the fourth powered test flight in October 2014, VSS Enterprise broke apart mere second into its powered flight phase, killing co-pilot Michael Alsbury while pilot Peter Siebold got liberated from the falling wreck and was able to parachute to the ground despite his injuries. The National Transportation Safety Board concluded the structural break-up of the winged spaceplane was caused by a premature unlocking of the craft’s feather mechanism during the dynamic transsonic flight regime which induced the feathers to extend.

Featuring changes including a mechanical inhibit that would prevent unlocking of the feathers during transsonic flight, VSS Unity rolled out in February 2016 to re-start testing operations at Virgin Galactic. VSS Unity was built by The Spaceship Company, originally a joint venture between Virgin and Scaled Composites that developed the SpaceShipOne & Two vehicles, but now wholly-owned by Virgin and responsible for VSS Unity in its entirety, including the hybrid rocket motor.

VSS Unity took flight in September 2016 for a series of four Captive Carry Tests to study the craft’s aerodynamic properties and exercise its aerosurfaces before graduating to free flight tests in December 2016. The test program covering areas already explored by VSS Enterprise did not follow a firm schedule and was rather lined out as a data-driven endeavor, allowing engineers to conduct as many tests as they needed to gain full confidence in the vehicle’s readiness for the resumption of powered flight testing. A total of seven glide tests were performed through January of this year.

In the wake of the 2014 accident, Virgin Galactic and The Spaceship Company also changed the SpaceShipTwo rocket motor design that had switched from a rubber-based fuel to a thermoplastic polyamide propellant before the ill-fated flight. Although the rear-mounted rocket motor was not a factor in the accident, it was switched back to the HTPB-based compound.

The use of a solid fuel and liquid oxidizer allows the engine to be shut down by cutting oxidizer flow as opposed to pure solid rocket motors that can not be stopped once ignited. This feature enables testing to gradually step up to full duration burns and will enable flights to be aborted in case any problems arise during the powered flight phase.

Thursday’s powered test was the first in a series of such flights that will gradually expand the vehicle’s performance envelope and eventually see full-duration rocket burns and sub-orbital round-trips. The company did not say how many powered tests are expected as they continue to stress they will take the time needed to go through full data reviews between flights and adjust test objectives accordingly.

“Virgin Galactic is back on track,” company founder & chairman Richard Branson Tweeted after Thursday’s successful test. “Data review to come, then on to the next flight. Space feels tantalizingly close now.” Virgin currently has two more SpaceShipTwo vehicles under construction to build the company’s operational fleet that is envisioned to fly on a weekly basis, operating out of Spaceport America in New Mexico.

Virgin Galactic is in competition with Blue Origin to be the first commercial suborbital launch provider for space tourism and research. Blue Origin’s re-usable New Shepard launch vehicle and Crew Capsule have completed a number of test flights in recent years including demonstrations of the craft’s ascent abort capability.

Virgin Galactic lined up hundreds of customers that are ready to pay up to $250,000 for a flight to the edge of space to witness the sight of the curvature of Earth and its thin atmosphere in a flight lasting about two and a half hours from takeoff to landing – of which only a few minutes would be spent in microgravity.