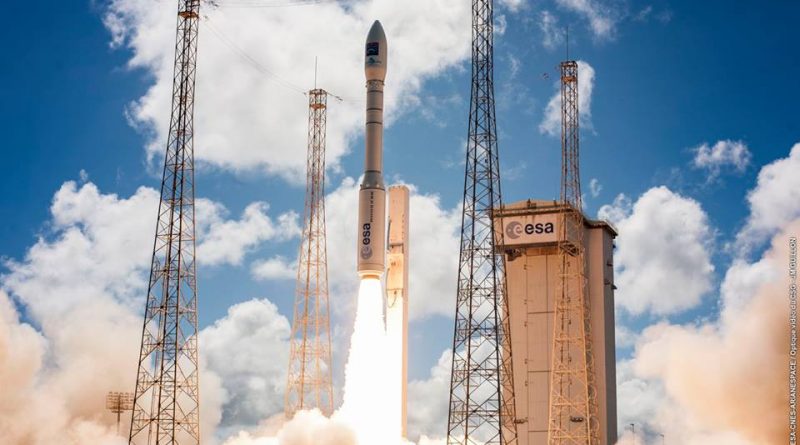 Vega – the smallest member of Arianespace’s rocket fleet – lifted off from Europe’s spaceport in French Guiana on Monday, carrying into orbit a high-resolution imaging satellite for operation by the Turkish Ministry of Defence.

Vega fired up its powerful solid-fueled first stage at 13:51:44 UTC and quickly catapulted itself off the ZLV launch pad, rising into mostly clear skies on a northerly departure path to deliver the 1,060-Kilogram Göktürk-1A satellite into a Sun Synchronous Orbit. The also solid-fueled second and third stage fired in close succession before powered flight was handed off to the AVUM upper stage to fire its engine twice to home in on a 700-Kilometer orbit.


Göktürk-1A was sent on its way just under one hour after liftoff to become Turkey’s sharpest eye in the sky.

Turkey ordered the satellite from Italy’s Telespazio in 2009 under a €250 million contract that also included the installation of a satellite integration and testing facility in Turkey. The launch of Göktürk-1A was held up due to political concerns by Israel that was in charge of providing some of the optical components on the satellite and brought forward concerns that imagery taken by the craft over Israel may end up in the wrong hands.

After some back and forth, Europe’s Vega was selected as the satellite’s launch vehicle in mid-2014 and Göktürk-1A was shipped to French Guiana in October 2016 ahead of a December liftoff. Based on the scalable Proteus Platform of Thales Alenia Space, Göktürk-1A hosts a high-resolution imaging system based on the instruments flown on France’s Pleiades-1 constellation.

Göktürk-1A collects black-and-white imagery at a ground resolution of up to 65 centimeters and full color & near-infrared images at a resolution better than 2.5 meters. Data from the satellite will be primarily used by Turkey’s Ministry of Defence for reconnaissance, but imagery will also be made available for secondary applications in mapping, urban planning, environmental monitoring, disaster management, coastal zone monitoring and resource management.

Göktürk-1A is the most capable in Turkey’s line of imaging satellites, following the RASAT spacecraft launched in 2011 and capable of collecting 7.5-meter images and the Göktürk-2 satellite launched in 2012 with an image resolution of 2.5 meters.

Monday’s launch marked the second of two planned mission’s of Vega in 2016 following the launch of the PeruSat-1 imaging satellite in September. As the light-lifter in Europe’s fleet of rockets, Vega is tailored for this specific type of mission, lifting medium-class imaging satellites into polar orbits with a LEO payload capability of up to 2,500 Kilograms.

Vega debuted in 2012 and was designed with simplicity in mind – avoiding overly complex systems to establish a low-cost system for launching commercial and government satellites into Low Earth Orbit. Simplicity is achieved by using a stack of three solid-fueled stages topped by a liquid-fueled Attitude and Vernier Module which gives the vehicle precise injection and multi-orbit mission capability.

Overall, the Vega launcher stands 29.9 meters tall and weighs 137,000 Kilograms at liftoff, not using any large liquid-fueled stages which eliminates any dynamic operations such as propellant loading from the rocket’s countdown. Heading into a multi-hour countdown, Vega was powered up for a series of checkouts and reconfigurations to ensure the vehicle was ready to support its hour-long climb into orbit.

With a favorable weather forecast, teams rolled back the Mobile Service Gantry three hours prior to the instantaneous launch opportunity to set up for a second round of systems checks and the evacuation of the launch zone. Vega entered final reconfigurations at T-34 minutes and the countdown transitioned into automatic mode when passing T-4 minutes to put the launch vehicle through the final steps before ignition – notably the transfer to internal power, the final check of the guidance system and the handover of control to the rocket’s computers.

Ignition of the P80 rocket stage marked the point of no return and Vega shot up from its launch pad as soon as the 280-metric-ton-force first stage motor fired up. Racing into mostly clear skies over its equatorial launch site, Vega pitched and rolled onto a departure to the North to reach a Sun Synchronous Orbit.

Burning 820 Kilograms of propellants per second, P80 accelerated Vega beyond the speed of sound within half a minute of liftoff. Thrust on the first stage tailed off one minute and 50 seconds into the flight with separation following a few seconds later, 55 Kilometers in altitude at a speed of 1.85 Kilometers per second.

Zefiro-23 – Vega’s second stage – fired immediately after stage separation, generating 122 metric ton force of thrust for a burn of 77 seconds to boost the rocket’s speed to four Kilometers per second. After burnout, residual thrust on the Z23 was allowed to tail off before the 8.4-meter long stage separated three minutes and 37 seconds into the flight when Vega had reached 126 Kilometers in altitude.

The third stage, designated Z9, ignited just before hitting T+4 minutes, embarking on a burn of almost two minutes with a peak thrust of 32 metric-ton-force – raising Vega’s speed to almost match orbital velocity. Just five seconds into the burn of the third stage, around 130 Kilometers in altitude, Vega split open and jettisoned its protective fairing halves as aerodynamic forces could no longer harm the delicate satellite sitting atop the vehicle.

Burnout on the 4.1-meter long Z9 stage was followed by a brief phase of coasting to ensure any residual thrust tailed off before letting go of the spent stage. At burnout of the third stage, Vega was 173 Kilometers in altitude and had reached a velocity of 7.63km/s.

Springs pushed the third stage away at T+6 minutes and 36 seconds, marking the handover of powered flight duties to AVUM, the Attitude and Vernier Upper Module that hosts the vehicle’s flight computers, attitude control system, and a main propulsion system capable of orbital maneuvers.

AVUM’s first task was to lift the rocket from a sub-orbital arc into an elliptical Parking Orbit by firing its 250 Kilogram-force MEA (RD-869) engine for close to six and a half minutes, entering an orbit with a high point of 700 Kilometers. The upper stage was also tasked with dynamically adjusting its flight profile in order to correct any errors occurring on the lower stages.

AVUM re-started its engine after 40 minutes of coasting to complete the second burn around the high-point of the orbit so that the engine firing could act as a circularization maneuver as Göktürk-1A was aiming for a circular Sun Synchronous Orbit 700 Kilometers in altitude, inclined 98.11 degrees from where it can cover the Turkish territory with a revisit time of under two days.

The second burn was just over 100 seconds in duration and achieved the expected orbit, allowing AVUM to set up for the separation of its passenger. Göktürk-1A was sent on its way 57 minutes after liftoff and the first signals from the satellite arrived 12 minutes later confirming the satellite was healthy and completing its first steps in orbit to mark the start of several weeks of commissioning and calibration before handover to the Turkish satellite operators.

U.S. Space Surveillance detected the Göktürk-1A satellite in an orbit of 679 by 692 Kilometers, inclined 98.15°. The AVUM upper stage fired up its engine for a third time 106 minutes into the flight to remove itself from orbit for destructive re-entry over an open area of the Indian Ocean.

According to Arianespace, Göktürk-1A was the 60th Earth-imaging satellite launched by the company, now looking forward to closing a busy year on December 20 with the launch of the Star One D1 and JCSat-15 communications satellites atop an Ariane 5 rocket.