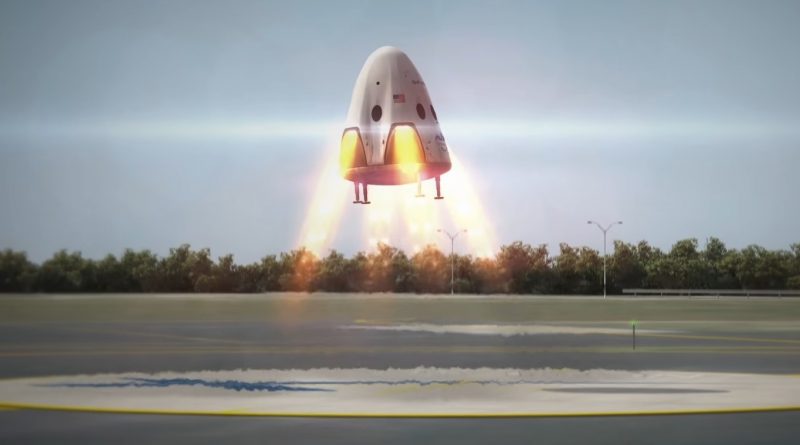 Unveiling the design of SpaceX’s Dragon 2 spacecraft in May 2014, Musk highlighted the craft’s ability to make a pin-point landing atop a flat concrete pad using its powerful SuperDraco engines and four landing legs that would extend from the vehicle’s protective heat shield. Initial Dragon 2 flights were planned to stick to the ocean-based splashdown landing technique used by the current generation of Dragon spacecraft, but SpaceX had hoped to inaugurate propulsive landings later in the program and use a similar landing technique for uncrewed Dragon spacecraft attempting a daring touchdown on the surface of Mars.


Elon Musk said on Wednesday that these plans would be abandoned, citing safety concerns & certification issues and questioning the usefulness of the landing scheme for SpaceX’s Mars plans. Per the revised design, the four landing legs will be eliminated but Dragon 2 will retain the side-mounted SuperDracos that double as a launch escape system to boost the capsule away from a failing launch vehicle. The cargo version of the Dragon 2 will drop both, the SuperDracos and legs, as no propulsive launch abort capability is needed for cargo missions.

“It would have taken a tremendous amount of effort to qualify that for safety, particularly for crew transport,” Musk said about the propulsive landing technique. “There was a time that I thought the Dragon approach, where you’ve got a base heat shield and side-mounted thrusters, would be the right way to land on Mars. – Now, I’m pretty confident that is not the right way and there’s a far better approach.”


Musk did not elaborate on the alternative approach, but his remarks seem to imply that SpaceX is abandoning plans of Red Dragon missions that would have seen a Dragon 2 vehicle launch on a Falcon Heavy rocket and land on Mars powered by the SuperDraco thrusters to deliver valuable data on retropropulsion in the tenuous Martian atmosphere and deploy an experiment suite to the surface to explore whether resources present at Mars could be effectively used for human settlement. NASA had expressed interest in the missions and offered technical assistance, communications and tracking support.

Plans for Red Dragon were made public last year for launch as early as 2018, but SpaceX President Gwynne Shotwell said earlier this year that the launch slipped to 2020. Although Musk did not directly address Red Dragon in his remarks, the elimination of Dragon’s propulsive landing provisions, particularly the deployable legs, would rule out such missions.

Concerning SpaceX’s Mars plans, Musk confirmed on Wednesday that the company had made significant revisions of their overall Mars architecture that was unveiled last year in a highly publicized presentation at the International Astronautical Congress in Mexico. This plan called for the development of a giant reusable Interplanetary Transport System consisting of a booster rocket, a tanker spacecraft, and a very large crew craft capable of ferrying several dozen passengers and cargo from Earth to the surface of Mars.

“It’s evolved quite a bit since the last talk,” Musk said of SpaceX’s proposed Mars architecture. “The key thing that I’ve figured out is how to pay for this whole system to go to Mars. It’s super expensive.” To be financially viable, Musk said, the new system must be useful for Mars missions as well as activity in Earth orbit (i.e. through the deployment of commercial satellite constellations or servicing existing systems). This way, revenue would be generated by the craft’s Earth-orbit services which in turn would finance the Mars effort.

“It’s a little smaller, still big, but I think this one has got a shot at being real on the economic front,” Musk said about SpaceX’s updated Mars launch vehicle and spacecraft design. He said he might present more details at this year’s International Astronautical Congress, held September 25-29 in Adelaide, Australia.


Musk said on Wednesday that primary focus is currently on the company’s Dragon 2 spacecraft, progressing toward crewed missions by mid-2018 to begin services as part of NASA’s Commercial Crew program to end reliance on Russia’s Soyuz craft for the launch of ISS crew members.

SpaceX holds a $2.6 billion contract awarded by NASA in 2014, covering final development work of the upgraded Dragon spacecraft and up to six crew rotation missions to ISS. Boeing holds a similar contract worth $4.2 billion and expects to complete the first crewed flight of their CST-100 Starliner spacecraft in the August 2018 time frame.

Both companies have fallen well behind the original plan of having Commercial Crew up and running by the end of this year. Musk noted much tougher NASA oversight for the crewed spacecraft than for the commercial cargo program. “As soon as people enter the picture, it’s really a giant step up in making sure things go right,” Musk said. “For sure, the oversight from NASA is much tougher. I thought it was tough for cargo, but it’s really intense for crew.”

One major precursor to crewed flights of the Dragon will be the debut of the Falcon 9 Block 5 version later this year – featuring another slight performance boost on its Merlin 1D engines as well as modifications enabling easy and quick re-use of the first stage for turnarounds of just 24 hours in between missions.

NASA requires seven flights of the Falcon 9 in a ‘frozen design’ to certify the vehicle for crew transportation. To date, SpaceX introduced new components and system modifications on a flight-to-flight basis in addition to Falcon 9 evolving through several larger design blocks.

Elon Musk also used Wednesday’s interview for a preview of the upcoming debut of the Falcon Heavy rocket, SpaceX’s heavy-lift vehicle comprising three cores firing in unison with a second stage sitting atop the central core. Managing expectations for the rocket’s first flight, Musk said “there’s a lot of risk associated with the Falcon Heavy. There’s a real good chance that vehicle does not make it to orbit. I want to make sure and set expectations accordingly.”

Musk explained that development of the Falcon Heavy turned out to be much more complex ‘than simply strapping three Falcon 9 cores together.’ Challenges arise from harnessing the power of 27 Merlin 1D engines that have to light up in a carefully controlled sequence to avoid excessive thrust-induced forces that could rip the rocket apart while still sitting on the pad. Another design challenge was within the central core of the Falcon Heavy stack, needing a major re-work of its structural air frame compared to a single-core Falcon 9 because of the massively powerful boosters sending their thrust force along with engine-related vibrations into the central core.

The next major watch item for the first Falcon Heavy flight will be the rocket’s aerodynamic behavior, especially around the point of Maximum Dynamic Pressure as structural loads and aerodynamics have proven difficult to model, according to Musk, requiring a real-world test flight to obtain firm data. The separation of the twin booster cores is also a major unknown for the inaugural mission as there had been earlier concerns that the lack of separation rockets on the outer cores may pose a risk of contact with the center core during separation.

If that were not enough, SpaceX will employ a pair of previously flown boosters as the two outer cores for the maiden Falcon Heavy voyage and aims to return them to landing pads at Cape Canaveral while the central core will target SpaceX’s Drone Ship after dispatching the second stage toward orbit.

Schedule plans call for Launch Complex 39A to enter around two months of outfitting for Falcon Heavy once the Cape’s Space Launch Complex 40 can be re-activated after last year’s Falcon 9 testing mishap, currently looking at late August/early September for a resumption of launch operations. This would place Falcon Heavy’s earliest rollout into November which will be followed by a period of on-pad testing that may include several static fire tests before clearing the rocket for its highly-anticipated mission.

“I encourage people to come down to the Cape to see the first Falcon Heavy mission,” Musk said. “It’s guaranteed to be exciting.”