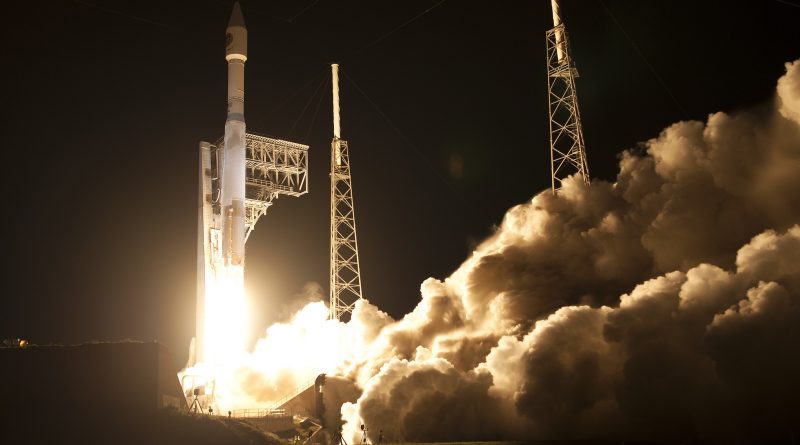 Orbital ATK will call upon ULA’s Atlas V rocket one more time to deliver cargo to the International Space Station in the spring of 2017 to ensure the orbiting complex remains in a comfortable resupply situation and can operate at full capacity through what is shaping up to be a busy year for the ISS program.

The launch of the Cygnus OA-7 mission is shifting from Orbital’s upgraded Antares 230 launching from Wallops Island to a Cape Canaveral launch atop a United Launch Alliance Atlas V 401. This change is being made in part due to request of NASA to take advantage of the additional power of Atlas V to send more cargo to ISS and count on the rocket’s schedule certainty to ensure the Cygnus freighter arrives on time.

“Following a successful Antares launch for the recent OA-5 Commercial Resupply Services mission and subsequent rendezvous and berthing of the Cygnus spacecraft with the International Space Station, Orbital ATK has responded to NASA’s needs for enhanced schedule assurance for cargo deliveries and maximum capacity of critical supplies to the space station in 2017 by once again partnering with United Launch Alliance to launch Cygnus aboard an Atlas V for the upcoming OA-7 mission in the spring timeframe,” the company said in a press release.


A pair of previous Cygnus missions were flown by Atlas V in December 2015 and March 2016 while Orbital ATK launch operations were standing down following the October 2014 launch failure of the Antares rocket which was followed by a lengthy re-design to fit the booster with new engines. Antares returned to flight in October with the Cygnus OA-5 spacecraft that currently resides on the Space Station’s Unity module, delivering nearly 2,350 Kilograms of cargo.

Orbital ATK announced the switch to Atlas V last week after a decision made in a collaborative effort between the company and NASA with the desire to deliver more cargo to ISS in early 2017 which will put the Station in a good position to deal with planned operations that year.

Schedule assurance was also on NASA’s mind after resupply missions repeatedly slipped this year – Orbital’s return to flight was delayed from a summer target to October, Japan’s H-II Transfer Vehicle was grounded until December due to a spacecraft-related issue and the SpaceX Dragon is forced to wait for Falcon 9 to resume mission operations after suffering an on-pad explosion on September 1st.

Using Atlas V allows Cygnus to take on around 300 Kilograms of additional cargo versus flying on the upgraded Antares. In the specific case of OA-7, Cygnus will fly around 3,500 Kilograms of pressurized cargo plus an external CubeSat Deployer accounting for another 100 Kilograms.

The switch in launch vehicles also decompresses the schedule at the Wallops Flight Facility and allows for some downtime after a busy summer preparing the re-engined Antares for flight and working through a number of minor corrections on the vehicle after a hot-fire test in May. Reviews of the inaugural mission of the Antares 200 series show no red flags, but Orbital ATK believes Atlas V has a higher probability for launching on time as a more mature launch system than the relatively new Antares.

The OA-7 mission takes advantage of Orbital’s flexible mission design, allowing Cygnus to be fitted atop different launch vehicles. Processing at the Cape will be completed at the Space Station Processing Facility at the Kennedy Space Center, making use of procedures utilized on the two OA-4 and OA-6 interim missions.

OA-7, currently penciled in for the March time frame – will be the first of three planned Cygnus missions in 2017 with the remaining two flying on the Antares rocket, according to Orbital ATK that calls the Atlas V mission a ‘one-off deal.’

Orbital ATK holds a $1.9 billion contract under the first phase of the Commercial Resupply Services Program including eight Cygnus missions to deliver 20 metric tons of cargo to ISS. At present, Orbital ATK stands at a total of 14.9 metric tons of cargo, including the 2,200kg lost in the Orb-3 launch mishap which, according to contract specifics, does not have to be compensated for by the company.

Three additional Cygnus missions were booked by NASA as an extension of the CRS-1 contracts in 2017/18 to bridge a gap until CRS-2 comes into effect for which Orbital ATK is guaranteed at least six Cygnus missions through 2024.

“With four Antares launches from October 2016 to early 2018, together with the Atlas V rocket, this plan represents the company’s commitment to establishing schedules that are realistic and achievable,” Orbital ATK said in a statement.

To support this capability, United Launch Alliance has increased the production rate of Atlas V vehicles and holds off on modifying boosters for each mission’s design specifics until the last three months of manufacture – permitting spacecraft to be assigned to boosters with an extremely short lead time.

To date, Atlas V has flown 65 times since 2002. All missions were marked as successful and, in addition to its high success rate, Atlas V can show off an impressive launch-on-time performance over recent years, hauling government-operated satellites as well as a growing number of commercial missions. According to ULA, OA-7 is the first of multiple RapidLaunch slots available in 2017 which could be filled by more commercial customers looking for alternatives after suffering delays while waiting in line for launches on the SpaceX Falcon 9 and Russia’s Proton, both of which suffered lengthy delays this year.