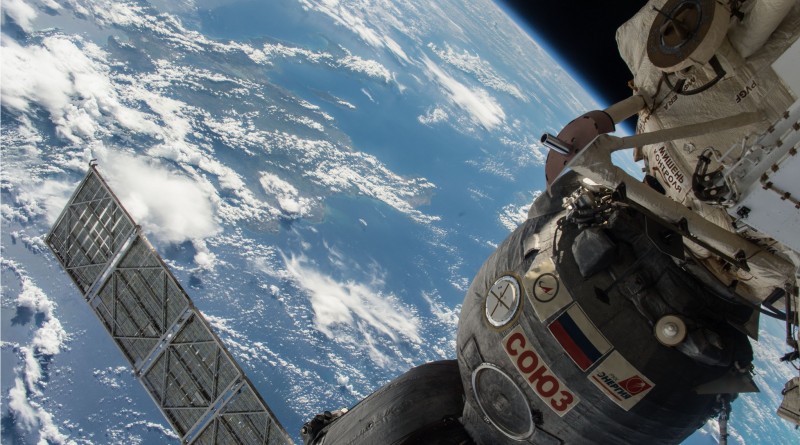 The ExHAM #2 external experiment platform was installed on the Exposed Facility of the Japanese Experiment Module on Thursday. For the installation, the outer hatch of the Kibo Airlock was opened and teams on the ground used the JEM Remote Manipulator System (JEMRMS) Small fine Arm to retrieve ExHAM from the airlock slide table and set it up on the exposed pallet.

ExHAM-2 is the second accommodation system for small experiment payloads for the Japanese Experiment Module Exposed Facility (JEM-EF or JEF) to provide access to space exposure studies to a variety of experiments without the need for spacewalking Astronauts to install exposure payloads. The system is a cuboid mechanism that hosts a grapple fixture for the JEM Remote Manipulator System Small Fine Arm so that it can be transferred to the outside of ISS via the JEM airlock for robotic installation on a JEF hand rail using a clamping mechanism on the underside of the payload.

A total of 20 experiment samples can be facilitated by ExHAM, seven on its upper surface and 13 around the side surfaces of the structure. Each experiment cell measures 10 by 10 by 2 centimeters.

ExHAM modules can be launched with experiments already attached or experiment samples can be launched individually for checkout and installation by the ISS crew followed by the transfer to the outside via the JEM airlock and the installation on the exterior to remain exposed to the space environment (microgravity, radiation, atomic oxygen…) for a specified period of time according to the experiment’s requirements. After return to the inside of ISS, the samples are packed up and returned to the ground for detailed laboratory analysis.

ExHAM simplifies the conduct of materials studies in the space environment and gives a number of institutions from universities to industry partners an opportunity to conduct space exposure experiments.

Myco Experiment [The Myco study, going by the full name Mycological Evaluation of Crew Exposure to ISS Ambient Air, examines the microflora aboard ISS with particular focus on fungi that could be the cause of opportunistic infections or allergies if a crewmember’s immunity is compromised. The experiment involves several sessions of sampling from a crew member’s nasal cavities, pharynx, saliva and skin at various points in their flight.]

Haptics-2 Experiment [The experiment hardware consists of a joystick that uses a highly power-dense brushless direct-current actuator, an EtherCAT motor controller, custom-built force and torque sensors and flight computer using Commercial off-the-shelf components. The Haptics-1 joystick is mounted via standard space station interfaces to a body harness. Haptic feedback is extremely important for future telerobotics performed from space as it provides the controller with guidance as to how much force needs to be applied to complete a given job. This is already used on Earth, but for application in space, the examination of haptic feedback perception in astronauts in zero-G is necessary. As part of experiment sessions, the astronaut can push and pull the joystick to complete simulated tasks that involve haptic feedback provided by the system that can produce minute forces that will be hard for most people to notice up to considerable resistance.]

Otklik Experiment Hardware Check [Otklik uses several piezoelectric sensors to track the impacts of small particles and debris on the exterior of the International Space Station to monitor the abundance of debris events and a series of other characteristics. These measurements provide valuable data for the construction of future spacecraft]
Interactions Experiment [‘Vzaimodeistviye’ (Interactions) looks at psychological aspects of long duration space flight during which different cultures come together aboard a Spacecraft such as ISS and seeks to improve crew interactions aboard ISS and with teams on the ground.]

Plant Gravity Sensing Experiment Run Termination due to failure of plant germination [The experiment looks at gravity sensing in thale cress, a generic model used in many plant studies. As part of the experiment, the plant is cultivated in microgravity and artificial gravity using a centrifuge to determine changes on a cellular level that point to the mechanism of gravisensing with particular focus on calcium channel activation through the MCA-1 protein. An increase of calcium within the cytoplasm of plants is known to occur in response to stimuli such as phytohormones, temperature and touch the mechanism of which has been studied extensively on Earth. Whether a calcium increase also occurs as a result of gravistimulation remains to be seen as gravity is difficult to control for ground-based tests. The mechanisms of underlying biochemical reaction paths that lead to gravitropism are fully unknown. Recent studies point to a protein, MCA-1, and an actin cytoskeleton that are involved in the transport of calcium to create a directional response in the presence of gravity. The current hypothesis is that amyloplasts (starch containing particles) sediment in the direction of the gravity vector as a result of their high mass. This sedimentation causes tension stress in actin fibers thus activating the mechanosensitive calcium channels. Whether this system of channels and actin fibers also forms in microgravity is unknown.]