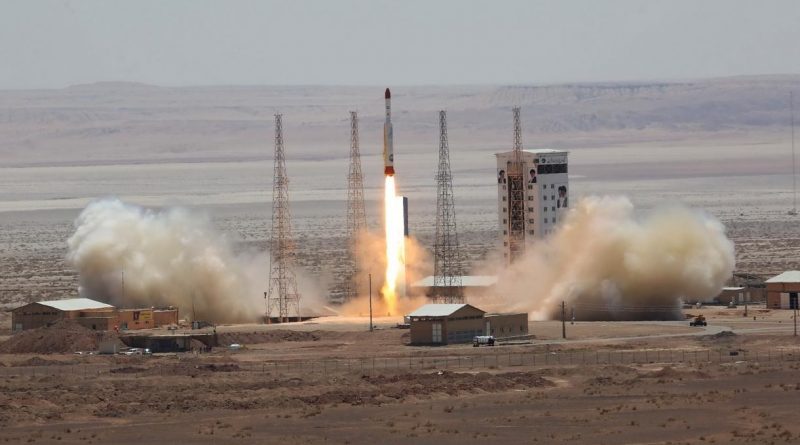 To date, Iran successfully launched four satellites into orbit with the country’s Safir-1, Safir-1A and Safir-1B rockets which lack the power of placing sizeable satellites into usable orbits. Simorgh, Persian for “Phoenix,” represents a second-generation vehicle with a reported payload capacity of 250 Kilograms into a 500-Kilometer orbit – enabling the exploitation of space for Earth-observation, meteorology and communications.

Iran’s Islamic Republic News Agency reported on Thursday that the country had carried out a successful test launch of the Simorgh booster, also marking the “official opening” of the Imam Khomeini Space Launch Center (IKSLC), Semnan Province. Iranian officials said the launch was a success and did not intend to place a satellite into orbit.


Pentagon officials confirmed the launch occurred at around 9:30 UTC on Thursday and did not place a satellite in orbit. U.S. news outlets, citing anonymous Pentagon sources, claimed that the launch vehicle suffered what was characterized as a ‘catastrophic failure.’

Contrary of U.S. media statements, Iran released numerous photos and videos of Simorgh’s launch which would be a departure from the usual procedure if the launch indeed did not succeed.

Simorgh was first revealed in 2010 as Iran’s next-generation orbital launch vehicle capable of reaching higher altitudes with heavier satellites than the Safir series. Iranian officials said Simorgh would employ new liquid-fueled engine technology and have around four times the thrust of the Safir vehicle, allowing it to lift 100 Kilograms into a 500-Kilometer orbit in its initial version. Later versions of the vehicle were expected to carry 250kg into a 500km orbit and reach even higher orbits – potentially even Geostationary Transfer Orbit – through the use of a solid-fueled upper stage.


By mid-2012, design work on Simorgh was reported complete and initial launches promised for 2013, however, these dates came and went. In 2015, budget restrictions were blamed for the slow progress of the project and, later that year, it was reported Simorgh would be operational by the end of the next calendar year.

First visible signs of a finished Simorgh sitting atop its launch pad came in February 2016 when Western intelligence satellites spotted the vehicle on the IKSLC launch pad, however, Iranian officials said the inaugural mission of Simorgh was postponed – most likely due to technical issues. In March 2016, plans for a three-stage test program for Simorgh were revealed, calling for two sub-orbital test missions before attempting to place a satellite into orbit.

Simorgh launched for the first time on April 19, 2016, but the mission was not acknowledged by the Iranian government. U.S. and Russian intelligence services tracked the launch but only confirmed that no object was placed in orbit and the launch vehicle impacted in southern Iran. It remains open whether the mission was a first stage test in which case it likely was a success or whether it intended to go further but suffered an anomaly.

Launches carried out on July 11, 2016 and January 29, 2017 were identified by some sources as further Simorgh tests, however, both appeared to fail shortly after liftoff. Neither launch was reported by official Iranian news agencies which provides additional support for Thursday’s launch having indeed been a success.

According to the most recent presentations, Simorgh stands 25.97 meters tall with a 17.8-meter long first stage measuring 2.4 meters in diameter and a second stage that is 8.2 meters long and 1.5 meters in diameter. The vehicle has a launch mass of just over 85 metric tons and uses a self-igniting mix of Unsymmetrical Dimethylhydrazine and Nitrogen Tetroxide on both stages.

The first stage of the Simorgh launch vehicle is powered by a cluster of four main engines with a combined vacuum thrust of 1,245 Kilonewtons (127 metric ton-force), assisted by a 147kN (15tf) four-chamber steering engine – often referred to as a ‘fifth engine’ by Iranian sources. Stage 1 burns for around 120 seconds, in the process consuming over 60 metric tons of the toxic propellant mixture.

A number of parallels exist between Simorgh’s first stage and the North Korean Unha rocket, the most striking being the four clustered engines. The consensus among Western observers appears to be that Iran employs a version of the North Korean Nodong engine for both the Safir (single-engine) and Simorgh rockets (four-engine cluster), though there have been hints that Iran operates the engines at slightly different conditions (mixture ratio, chamber pressure) – potentially representing an upgraded Nodong design.

The second stage of the Simorgh rocket is a widened and stretched version of the Safir-1B second stage, holding around 7.5 metric tons of propellant for consumption by a pair of two-chamber engines, delivering a total thrust of 70.6 kN (7.2tf) when flying in the rarefied upper atmosphere.

Iran’s space program exhibited a small kick-stage suitable for the Simorgh rocket, suitable for injecting satellites into higher orbits, featuring a high-thrust, short-burn design. Thursday’s launch, if intended to be sub-orbital, would not have employed a third stage.

Future satellites riding atop the Simorgh will be enclosed in a fairing measuring 1.5 meters in diameter and standing over three meters tall, offering plenty of space for the third stage and a sizeable satellite.

The first satellite identified for a ride on Simorgh is Toloo – reportedly weighing in around 100 Kilograms and targeting a 500-Kilometer orbit from where it could capture imagery with a ground resolution of 50 meters. The hexagonal satellite is also reportedly carrying a Signals Intelligence payload developed by Iran Electronics Industries. 100 centimeters tall and 86 cm in diameter, Toloo would be the largest satellite placed into orbit by Iran.

To date, Iran successfully launched four satellites but all only had short orbital lives due to their launch vehicle’s inability to place them into long-lived orbits. This, Iran hopes, will change once Simorgh begins its orbital flight phase.