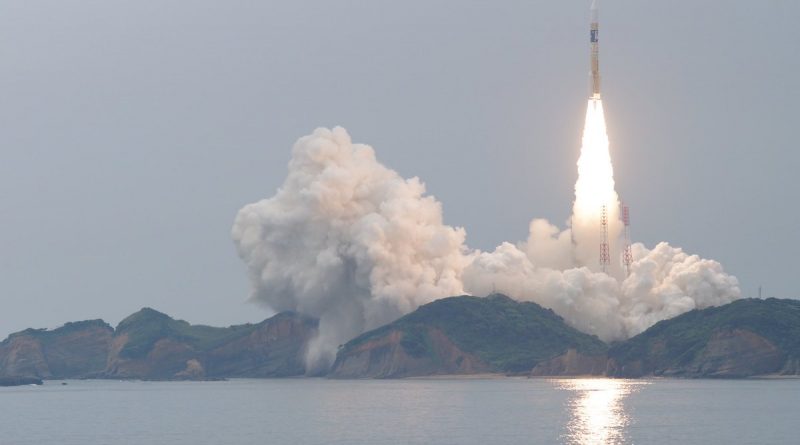 A Japanese H-IIA rocket screamed away from the country’s Tanegashima Space Center on Thursday, dispatching an innovative satellite into orbit to join a constellation of spacecraft enhancing the availability and accuracy of Global Positioning System navigation services over the Japanese Islands and Asia-Pacific Region.

The 53-meter tall H-IIA rocket took flight at precisely 0:17:46 UTC, lifting off the ground powered by its cryogenic main engine and a pair of Solid Rocket Boosters that did most of the work for the first minute and a half of the flight before dropping away. H-IIA relied on its cryogenic core stage for six and a half minutes before the second stage took over for a pair of burns – first into a Low Earth Parking Orbit ahead of a critical re-start to boost the 4,000-Kilogram satellite into an elliptical transfer orbit.

Known as QZS-2, Japan’s second Quasi-Zenith Satellite departed the upper stage 28.5 minutes after launch, embarking on a mission to join the first QZS satellite in a specialized Geosynchronous Orbit to be followed by the QZS-3 and 4 satellites later this year to bring the constellation to operational strength in order to open for business by mid-2018.


The Quasi Zenith Satellite System (QZSS) takes a unique spot in the world’s navigation satellite systems in that it augments a foreign satellite constellation in a twofold manner: a) by acting as a member of the GPS constellation and transmitting GPS-compliant navigation signals, and b) relaying augmentation signals generated on the ground to allow receivers to factor corrections into their position calculation to improve location accuracy.

Traditional augmentation systems such as the U.S. Wide Area Augmentation System only provide augmentation signals, but in Japan’s specific case the issue was not only to increase GPS accuracy but also enhance its availability, especially in the country’s urban canyons where tall buildings can block GPS signals and cause outages when not enough satellites are sufficiently high to allow a user on the ground to compute its position which requires inputs from four satellites.


To accomplish this, QZSS hosts three satellites transmitting GPS navigation signals from a specialized Tundra orbit that allows one satellite to be at very high elevation for the entire Japanese territory at any given time (increasing the odds that a full set of four GPS transmitters is available for a user on the ground).

Plans for QZSS first started out in 2002 when development work was initiated by an industry consortium in Japan which later dissolved and the project continued under supervision by JAXA. The U.S. provided clearance for Japan to use the GPS navigation bands in 2006 and the first QZS satellite lifted off atop an H-IIA in October 2010 on a proof-of-concept mission.

Taking up residence in its high-altitude perch, the QZS-1 satellite – nicknamed Michibiki-1 (to guide, to show the way) – entered a multi-month signal characterization and optimization phase. By July 2011, the all signals coming from the satellite were set to healthy and studies showed GPS accuracy with augmentation messages from QZS-1 increased by a factor of up to 2.5.

With the concept for QZSS proven, JAXA contracted Mitsubishi Electric for a total of $526 million to build three additional satellites – two of which will join QZS-1 in Tundra orbit to create 24/7 coverage over Japan while QZS-3 will be headed into a normal Geostationary Orbit from where it can deliver augmentation services to the entire Asia-Pacific Region. The complete four-satellite constellation is expected to be in orbit by the end of the year and begin operations next year.

Based on the flight-proven DS-2000 satellite platform, QZS-2 stands 6.5 meters tall and has a launch mass of 4,000 Kilograms, including 370kg for the navigation payload. At the heart of the navigation package sits a pair of redundant Rubidium Atomic Clocks that provide the ultra-stable timing needed for the generation of the navigation signal that is transmitted via an L-Band antenna.

QZS-2 transmits navigation signals in the L1, L2 and L5 bands which are processed by ground-based receivers like any other GPS signal. Augmentation messages are not generated onboard the satellite but on the ground through monitoring of GPS signal variability by an array of ground stations across Japan and surrounding regions which detect GPS clock errors and other factors like signal delay caused by changes in Earth’s ionosphere.

Correction data for these varying factors is uplinked to the QZS satellite which immediately re-transmits it to any enabled receiver in its footprint which can then apply the corrections to its navigation solution to yield a more accurate location, on average with one-meter accuracy.


QZS-4 will be an identical carbon copy of the second satellite and complete the three-satellite constellation that allows one of the satellites to be almost directly overhead (zenith) as seen from a user in Japan. The QZS-3 satellite will be slightly heavier, weighing in at 4,700 Kilograms, and aiming for a 15-year mission in the traditional Geostationary Orbit from where it can relay augmentation messages to a large area.

Called upon for the launch of QZS-2 was Japan’s trusted H-IIA rocket that debuted back in 2001 and has flown 33 times prior to Thursday’s mission, logging 32 successful missions.

Standing 53 meters tall, the launch vehicle consists of a stack of two four-meter diameter stages, each powered by a single liquid-fueled engine, plus two SRB-A3 Solid Rocket Boosters on the first stage to deliver the initial kick needed to send the satellite toward its high-energy orbit. At liftoff, H-IIA weighs 285 metric tons and the launcher can lift up to 4,100 Kilograms into a Geostationary Transfer Orbit.

H-IIA was moved to its launch pad at 9:30 UTC on Wednesday, marking the start of the lengthy launch countdown with final hands-on work at the launch pad to connect the launcher to ground systems ahead of detailed systems testing before propellant loading started at 16:31 UTC. Over the course of a three-hour sequence, H-IIA received 120 metric tons of -183°C Liquid Oxygen oxidizer and -253°C Liquid Hydrogen fuel for consumption by the rocket’s LE-7A and LE-5B engines.

Testing continued throughout the countdown and H-IIA was prepared for its automatic countdown sequence heading into the last hour of the day’s count. As the countdown switched to auto-mode at X-4.5 minutes, H-IIA pressurized its propellant tanks, transferred to internal power and switched to onboard control before activating thermal batteries and completing a final thrust vector control check on the boosters to clear the way for ignition.

H-IIA came to life at X-5.2 seconds when the LE-7A engine began its carefully controlled ignition sequence to roar to a thrust of 86 metric-ton-force before the twin boosters were fired up when clocks hit zero – catapulting the rocket off the ground with a thrust of 596 metric-ton-force. Climbing away from its sea-side launch pad, H-IIA maintained a vertical orientation for only a few seconds before its engine and boosters gimbaled to enter the pitch and roll program designed to align the vehicle with its south-easterly flight path across the Pacific Ocean.

The familiar scream unique to the H-II rocket series was heard across the Tanegashima Space Center as the vehicle accelerated downrange, passing Mach 1 and encountering Maximum Dynamic Pressure one minute into the flight, burning 1,600 Kilograms of propellant every second of powered flight.

The twin boosters, doing most of the work during the initial flight phase, helped accelerate the vehicle to a speed of 1.5 Kilometers per second as each delivered a thrust of 255 metric ton-force for a 98-second burn prior to thrust tailoff. Burnout of the 15-meter long boosters was sensed by their declining chamber pressure, triggering the Flight Control System to initiate the separation 108 seconds into the flight at an altitude of 54 Kilometers.

By X+4 minutes and 10 seconds, H-IIA had escaped the dense atmosphere and reached 150 Kilometers in altitude, allowing the fairing halves to be split open and separated to shed no-longer-needed weight and reveal the QZS-2 satellite for the rest of its ride into orbit. The first stage was to shut down its LE-7A engine six minutes and 38 seconds into the flight, having reached a speed of 5.2 Kilometers per second.

Six seconds after MECO, the 37-meter first stage dropped away from upper stage to hand powered flight off to the LE-5B engine set for a pair of burns during Thursday’s primary mission.

Firing up its 14,000 Kilogram-force LE-5B engine, the second stage was to continue on a south-easterly trek for a burn of five minutes and 48 seconds to push the stack into a Low Earth Parking orbit around 270 Kilometers in altitude. After shutdown on the second stage, H-IIA entered a coast phase of exactly 12 minutes to reach the proper position for the second burn that was designed to set the high point of the orbit.

Instead of a mission to Geostationary Transfer Orbit that aims to minimize inclination, H-IIA was actively working to increase orbital inclination on Thursday, targeting a highly elliptical orbit of 250 by 36,140 Kilometers, inclined 31.9 degrees.

The second stage re-started its engine 24 and a half minutes into the flight on a planned burn of three minutes, expected to raise the vehicle’s speed by 2.5 Kilometers per second to accomplish the high-energy injection. Shutdown was marked 27 and a half minutes after launch when the upper stage’s navigation platform sensed it had achieved the proper orbit.

QZS-2 was sent off with a spring-loaded separation 28.5 minutes after liftoff, embarking on a 15-year mission delivering accurate navigation to users in Japan’s canyon-like city streets and aviators across the Asia-Pacific Region.

QZS-2 will be tasked with a series of burns over the course of the coming days and weeks to maneuver from its transfer orbit into the specialized Geosynchronous Orbit of the QZS constellation that describes a Figure 8 with its ground track and dwells over the Japanese Islands, ensuring one of the three constellation satellites is at an elevation of 60 degrees or higher, as seen from Japan.

The successful launch of QZS-2 atop its H-IIA rocket marked the first of three planned orbital launches on Thursday, June 1, 2017. Next up will be a SpaceX Falcon 9 targeting an instantaneous launch window at 21:55 UTC to blast off with the Dragon SpX-11 resupply craft headed to the International Space Station. Europe’s Ariane 5 rocket stands ready for liftoff during a one-hour window opening at 23:45 UTC to lift the ViaSat-2 Internet and Eutelsat 172B multi-band satellites into Geostationary Transfer Orbit.

May 30, 2017 Patrick Blau Comments Off on Photos: H-IIA Assembly for QZS-2 Launch