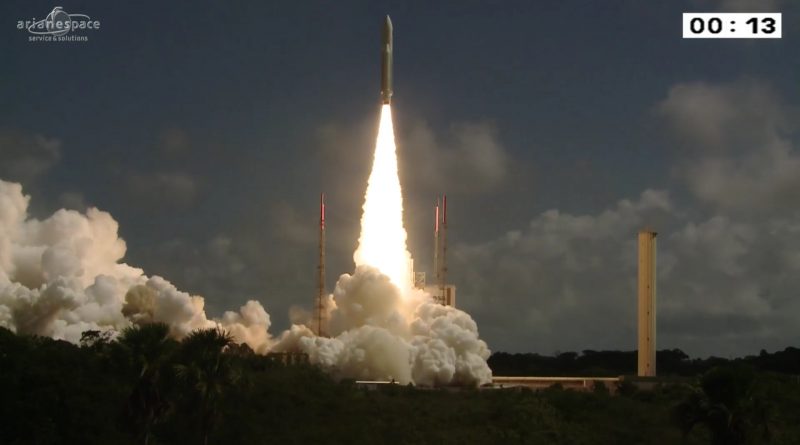 Europe’s Ariane 5 rocket rumbled off from South America on Thursday to carry into orbit the first quadruplet of Galileo Navigation Satellites, expanding the constellation to enter initial operational services.

The first 14 Galileo satellites, including test and prototype spacecraft, were launched two at a time on Soyuz rockets from the Guiana Space Center and Baikonur Cosmodrome beginning with a pair of pathfinder satellites in 2005 and 2008 before operational missions started in 2011. Operated by the European Commission, Galileo provides Europe independent access to precise timing and navigation data that has become an integral part of many applications beyond vehicular navigation – explaining the desire to build an independent system that ends Europe’s reliance on the U.S. GPS.


Galileo, ultimately consisting of 24 satellites in three orbital planes, will offer its highest accuracy to paying customers in governments and the private sector while standard services will be free of charge. The Galileo satellites host four clocks – two passive hydrogen maser clocks and two Rubidium atomic clocks with the masers on primary duty given the superior accuracy over the more-robust Rubidium clocks that would come into play in case of problems with the Hydrogen masers.

Ariane 5 lifted off right on time at 13:06:48 UTC on Thursday, embarking on a three-hour and 56-minute climb into an orbit nearly 23,000 Kilometers in altitude, sending the four 700-Kilogram satellites off in pairs.

Ariane 5 is flying in its ES configuration that is different from the ECA version in charge of the rocket’s bread and butter business of launching Geostationary Communications Satellites. Instead of an ESC-A Cryogenic Upper Stage that dispatches heavy payloads to elliptical orbits, the ES version features an EPS upper stage capable of starting its engine multiple times to boost the satellites directly into Medium Earth Orbit.

So far, Ariane 5 only employed the ES version five times to lift the five Automated Transfer Vehicle Missions between 2008 and 2014, lofting the 21-metric ton cargo ships into an orbit 260 Kilometers in altitude to deliver supplies to the International Space Station. The Galileo missions will take the EPS stage to new heights, requiring a direct insertion close to their operational orbit which creates a record-setting mission duration for the Ariane 5 rocket.

Adapting the Ariane 5 rocket for the launch of Galileo was a lengthy process that started in 2012 to establish a second source launcher for launching the satellite fleet aside from Soyuz to ensure the program can remain on schedule even in case one of the two launchers is not available.

Clustered around their 430-Kilogram payload adapter, the four OHB-built satellites were hidden under a 14-meter long payload fairing when Ariane 5 moved to its ELA-3 launch pad on Tuesday in preparation for a long 12-hour countdown.

Heading into its countdown, Ariane 5 was powered up ten hours before launch for extensive testing and reconfigurations. Fueling of the Cryogenic Main Stage started at T-5 hours to load 170 metric tons of Liquid Oxygen and Liquid Hydrogen. The EPS upper stage got its dose of 10 metric tons of self-igniting propellants earlier in the assembly phase and the twin boosters received their propellant as part of the manufacturing process.

With the first stage fully loaded at T-2 hours, Ariane 5 sat quietly while teams uploaded the flight software to the launcher and prepared the four satellites for liftoff ahead of pressing into the final countdown sequence with seven minutes left on the clock.

The powerful Vulcain 2 engine soared to full thrust when clocks hit zero and the twin boosters were fired seven seconds later, catapulting the 50.5-meter tall rocket off the launch table with a whopping thrust of 1,420 metric-ton force. Within seconds of liftoff the nozzles of the main engine and boosters swiveled to put Ariane 5 into its roll and pitch maneuvers to attain a launch azimuth of 35.5 degrees – a north-easterly departure instead of the typical path of GTO missions that takes the rocket due east.

The twin boosters delivered 90% of the vehicle’s total thrust during the early flight phase, accelerating the rocket to a speed of over two Kilometers per second before dropping away at T+2 minutes and 23 seconds. With the boosters on their way to impact in the Atlantic, Ariane 5 headed onward powered by its Vulcain 2 engine alone, guzzling down 320 kg of propellants per second and generating a vacuum thrust of 136,000 Kilogram-force.

When reaching an altitude of 115 Kilometers, Ariane 5 split open its payload fairing halves to rid itself of no-longer-needed weight as the four satellites could no longer be harmed by aerodynamic forces. The first stage fired until T+8 minutes and 56 seconds, boosting the upper composite to a speed of 8.2 Kilometers per second.

Separation of the EPS occurred just after T+9 minutes with ignition of the Aestus Engine coming only a few seconds later to continue pushing the stack into a highly elliptical Transfer Orbit. Aestus delivered a thrust of three metric-ton-force over the course of an 11-minute burn to place the vehicle into an orbit peaking at an altitude of 22,925 Kilometers.

Shutdown of the hypergolic engine marked the completion of the first propulsive phase of the flight which, according to the Mission Control Team, was right on the mark and reached a precise transfer orbit for a lengthy coast phase of three hours and 8 minutes.

Over the course of the lengthy coast, the stack climbed to the high point of the transfer orbit so that the second propulsive impulse could circularize the orbit. This engine burn got underway at 16:34 UTC and had a planned duration of six minutes and 18 seconds to aim for a perfectly circular orbit 22,900 Kilometers in altitude, inclined 54.57 degrees from where the satellites will enter Plane C of the Galileo constellation.

Separation of the four Galileo satellites was completed in pairs with the first two satellites being sent off into opposite directions three hours and 36 minutes after liftoff followed by the second pair at T+3 hours and 56 minutes. To conclude the flight, EPS was to make a passivation maneuver to enter a safe state and remain in the graveyard orbit.

Thursday’s launch marked the 89th flight of an Ariane 5, the 6th in the ES configuration and the sixth in 2016. It marked the ninth Arianespace launch of the year with two more on the manifest – the December 5 launch of the Goktürk-1 Earth Observation satellite on the Vega rocket and a two-satellite GTO mission of Ariane 5 on December 20 with the Star One D1 and JCSat-15 spacecraft.